Suppose there is an alternate universe where vacuum tube transportation was the main way of transporting goods. There would be a vast underground system of vacuum tubes spanning miles with massive fans lowering [sic] the tubes at hundreds of miles per hour connected to every house and building. When you order anything or get mail it arrives in different capsules excluding large items like furniture or TV etc.

Is it feasible to build and power such a global system of tubes given today's technology? How much resources would such a system need to function?

Is it possible to due this being vacuum or pressure, yes but you would really have to want it. The cost would be insane, and the build time even longer. It is not easily feasible for any meaningful distance, unless it becomes a 300yr project or some crazy time frame. You could save tons of money resources and etc if you only had 1 exit/entry per block, and people just had to walk that far.

The tubes would have to be super sturdy to withstand the ground pressures and earthquakes. They are digging super tunnels in Europe for trains, but the whole project is schedule to take 2-3 years just to go 20 miles or some super short distance.

Once you used up the worlds supply of concrete you would have to develop an even more expensive material to complete the network.

You would have to have numerous automated locks, as in the panama canal, because pushing a 20 miles distance from one pump is probably impossible. The pressure requirements would take too long to build up, and be to high to be safe, and leaks.

However, if you had smaller segments and redundant loops leaks could be detected and routed around. You pass through a lock, and it already has a tank a pressure or stored vacuum waiting for you to use. Maybe you could some recycle some of the pressure for the next user.

Each segment would need 2 or 3 levels of redundant fans/vacuum pumps and power supplies to in case of failure.

I believe maintenance, the truly staggering amount of electricity needed, and resources needed to build it in the first place would be crazy. Also any kind of failures could leave large numbers of people to suffocate or die from CO2 with no viable way to exit to the surface. Any kind of emergency exit would have to have a crazy system of seals to prevent leaks and increase cost exponentially.

According to Wikipedia, many different vaccuum tube transport systems have been proposed, dating back to at least 1909. Scientists from Russia, China, Poland, United States, Switzerland, etc., have all tried to develop viable means of pheumatic tube transport. However, they have all run into problems and all projects have been abandoned. So, until recently vacuum transport was considered prohibitively expensive without major advances in tunnelling and other technology.

However, Elon Musk reinvigorated the idea around 2013 using the term hyperloop:

While the term Hyperloop is in some countries a registered trademark of the Space Exploration Technologies Corporation (SpaceX) for the high speed transportation of passengers and goods in partially evacuated tubes. Hyperloop technology has been explicitly open-sourced by Musk and SpaceX, and others have been encouraged to take the ideas and further develop them.

To that end, a few companies have been formed, and dozens of interdisciplinary student-led teams are working to advance the technology. Hyperloop One of Los Angeles is the only company currently building a full-system and full-scale Hyperloop prototype and is expected to run the first test in early 2017, having demonstrated its propulsion system in May 2016. SpaceX built an approximately 1-mile subscale track for its pod design competition at its headquarters in Hawthorne, California. 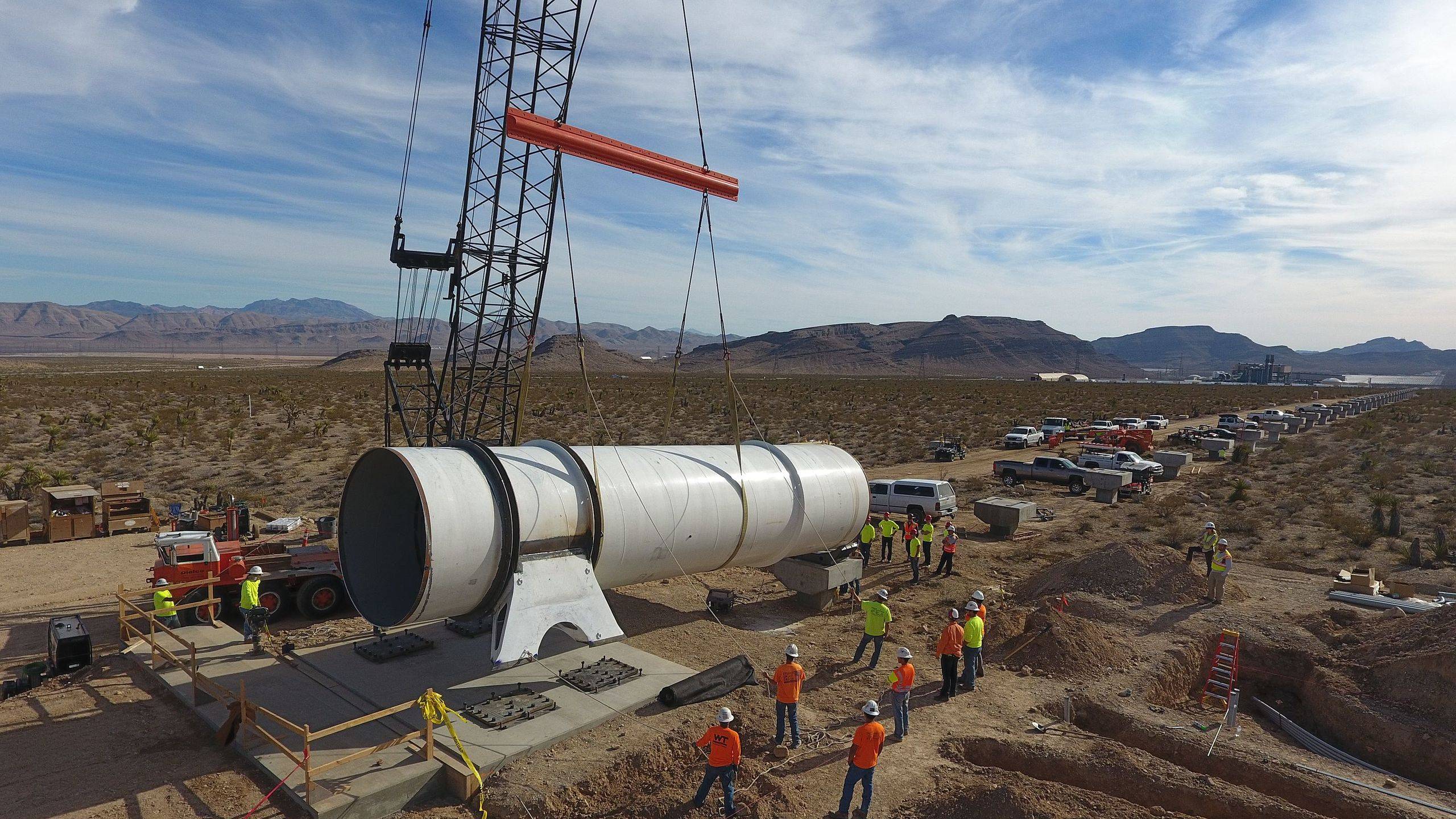 The first section of Hyperloop One's Devloop test track being installed at its Test & Safety Site in Nevada. November 2016.

However, even still some experts are skeptical, saying the proposals ignore the expenses and risks of developing the technology and that the idea is "completely impractical".

So, it remains to be seen whether a hyperloop system can in fact be produced.

Vacuum tube transportation. What in the world is that?! I understand that air resistance increases the amount of energy required to move an object around in an atmosphere, and at high velocities (a typical car's main power need above about 40 mph is overcoming wind/air resistance, depending on its shape). At lower speeds, other sources of inefficiencies are important (including both engine and power chain inefficiencies/losses as well as friction. (Without friction, wheels wouldn't work, otoh). Banks use vacuum tubes to suck the capsule into the bank and then suck it back to the car. Similar systems can be used to deliver messages and small packages around a building or perhaps even locations even farther apart. I'm guessing this is what you mean. There's a real problem with this system. Vacuum doesn't suck. Air pressure pushes. So, for such a system to work, you have to fill the tube in back of the direction it is moving with air. This is a non-starter for larger tubes (or larger distances) assuming you don't want to take hours or days/weeks between capsules. The reason is all the air you put in the system to push with, you have to take out to empty the tube again. The other thing you might mean is using a tube to reduce the air resistance for something like magnetic or electric propulsion. Could you do that? Sure. How often would you have to shut it down to seal leaks? Often. Would it ever be at a high vacuum? Probably not. So, since it will be more and more beneficial to reduce air resistance as speed and distance increases, does it make any sense to deliver small packages this way? Well, I don't see it. Its like mail boxes. Some people (apartments especially) have a mail box (or slot) that is the size of a 100 - 200 sheets of paper (8½ x 11) (some are even smaller). Some are larger, and the traditional rural route (USPS) mail boxes come in two sizes, the larger is about the size of maybe 3 shoe boxes. Either you need many different sized tubes (for each address!!!!) or you need one huge one, and the capsule will be sending mostly air (and itself) from place to place. Enormously wasteful. So, no, I wouldn't say it's "feasible". There are some people who are trying to attract the money to build a magnetic levitation system running in a low vacuum tube underground to move people 10s and 100s of miles between cities. These systems would be slow to get to speed, and would require very, very careful use of magnetic acceleration and near perfect computer control to work acceptably. You can get to high speeds - eventually - but remember you'll probably be spending long times speeding up and slowing down compared to more traditional systems. My guess is such systems will be so full of leaks, that they'll never work like they should (and hence be more expensive and less profitable (or more money loosing).

Not the answer you're looking for? Browse other questions tagged reality-check alternate-reality or ask your own question.

6
Could we transport matter to other planets with a charged particle beam?
17
Will interplanetary shipping even be necessary in a future with nanofabricators?
4
When traveling to an alternate Earth, how many generations would you have to breed with the natives to prevent inbreeding?
8
With current or near-future technology, how plausible is an aircraft-based civilization?