Could a carbon/silicon/oxygen planet exist?

I'm exploring various kinds of potentially habitable planets as part of a universe-building exercise, and have recently delved into the fascinating concept of carbon-rich planets. My question is multifaceted but mainly revolves around the possibility of a planet that is not dominated by either silicon/oxygen or carbon, but includes all three elements in equal abundance.

Take a planet, an Earth analog, 0.98 Earths in diameter, around 6 billion years old, still tectonically active, orbiting a K5 dwarf at 0.37 AU (comfortably within the liquid water zone.) The dwarf star contains oxygen and carbon in equal abundance. This planet's elemental composition is almost the same as earth's for everything, however: instead of 46% oxygen and 28% silicon, it has 25% silicon, 25% carbon and 24% oxygen, with everything else in roughly equal proportion to what's found on Earth.

Could a planet with this elemental composition exist? My impression from my readings is that carbon rich star systems and oxygen-rich star systems are mutually exclusive; if they have an abundance of carbon they are poor in oxygen and vice versa. Is this the case, or is it possible to have a roughly equal enrichment of all three elements?

Oxygen and Carbon are the third and fourth most abundance elements in both the universe and the solar system by ATOM FRACTION. Oxygen is the most abundant element in the Earth (again by atom fraction), but Carbon is all the way down at 12.

The reference numbers in MASS FRACTION are:

Your question is how to get a planet with equal parts Carbon and Oxygen; or at least a ratio more similar to that seen in the Solar System (roughly 2:1) instead of the ratio seen on the planet Earth (400:1)

You reference carbon-rich and oxygen-rich star systems beign mutually exclusive. As you can see from the relative abundances, carbon and oxygen are not necessarily exclusive, our own solar system has plenty of both.

But there are specifically carbon rich stars out there. What makes them carbon carbon stars? Well, in a star like the sun, with more oxygen than carbon but relatively cool, most of the carbon in the photosphere is bound with oxygen in the form of carbon monoxide (CO). There is relatively little free carbon, mostly in diatomic form, because there are energetically more favorable combinations to be had with oxygen. However, if there was more carbon than oxygen, all the oxygen would be bound in carbon monoxide and there would be surplus carbon; this would form compounds like diatomic carbon (C$_2$), Methylidine (CH), Cyanogen (CN) and other goodies.

How do carbon stars form? Two main ways (there are surely other ways, but I don't know much about them). One is for a giant star in the Asymptotic Main Branch. At some point after helium fusion into carbon starts, the star starts pulsing back and forth between helium fusion and hydrogen fusion as it expands and contracts. This causes convection that brings carbon to the surface and reveals the spectral bands that allow us to determine that it is a carbon star. Eventually, the pulses start to blow off mass and the star eventually becomes a white dwarf. The blown off mass becomes a planetary nebula.

The other mechanism, is for a star to be a binary twin of a star undergoing the process above. The blown off mass, with all its extra carbon, can get sucked into the binary twin, which now has a surplus of carbon before becoming a helium fusing star.

Generally speaking, either of these two mechanisms is a bad way to go for creating a habitable world. The variable strength of a carbon star would fry/freeze any planet in its orbit, and the exploding plasma ball from a binary twin would be bad for life around the second kind of carbon star.

Why there is little carbon on the Earth

This section is a little less certain, since it was hard to find direct evidence for some of my assertions. In general, the Earth has less carbon because of where it formed in the solar system. The early solar system more or less differentiated itself by its chemical composition. Metallic and silicate materials stayed closer to the sun, volitile liquids and gasses were pushed farther away. The water 'frost line' was about 3 AU from the sun while the proto-planetary disk was still there, so most of the water was farther from the sun than were the Earth coalesced. But most of the oxygen on earth didn't come from water, it came from silicate and metallic oxides, where oxygen was bonded to other common elements like Si, Fe, and Mg.

You may remember that most of the carbon in a star that had more oxygen than carbon was trapped in CO. Well the CO frost line was more like 15-35 AU. So that carbon was much farther away from the Earth than water was. And carbon does not form the same sort of compounds with silicon and metals. So the general gist of it is that carbon was pushed far away from the sun in the proto-planetary nebula, since most of it was in the form of very volitile CO, so most of it is in the gas giants and comets. It is worth noting that, according the paper linked about the CO frost line, the mechanism for the carbon enrichment in the gas giants is still unknown.

How to get a Carbon-rich planet.

So, even if a planet is formed in a carbon-rich system (say from the nebula blown off carbon-rich stars), that planet, if it were near the star, would not be carbon rich itself. So that leaves two possibilities I can think of for making a carbon-rich planet.

Edit: To be clear, the CNO cycle happens in a star's core. The convective zone of a star is cool enough for heavier atoms to retain their electrons, and in the photosphere molecules can and do form. See Asplund, et al., 2005 (section 3) for details on CN, CO, C$_2$, NH, OH and other molecules detected by their emission characteristics in the sun's photosphere. 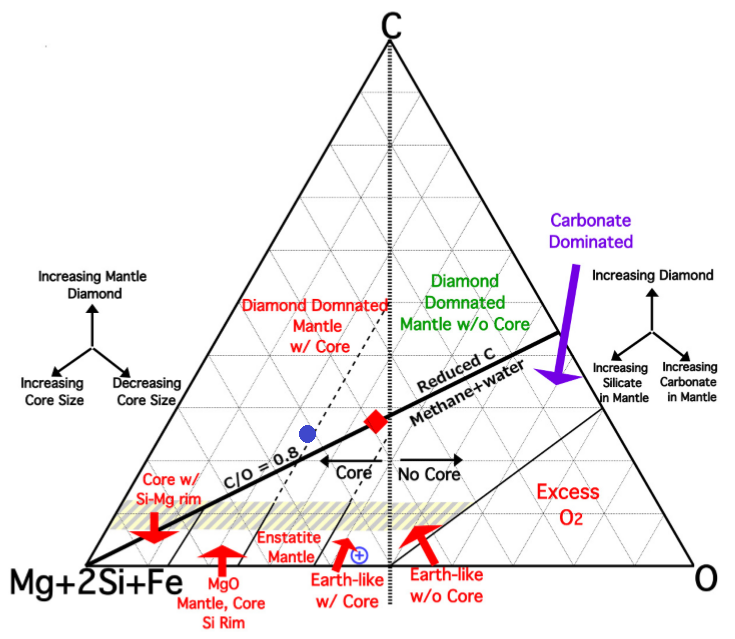 This means this planet would have

Not the answer you're looking for? Browse other questions tagged reality-check planets hard-science earth-like or ask your own question.

9
How would this tidally locked planet be affected by its moon and would the moon have a deaccelerated orbit?
0
Planet with two moons and rings? Is it possible?
13
Are trojan planets possible? Are habitable trojan planets possible?
4
Looking for a review of my tidally locked red dwarf planet system specs!
3
What would be the chemical composition of the crust and core of a planet comprised primarily of diamond?
4
Is an earthlike planet with ammonia oceans even plausible?
5
How should the human respiratory system be changed to be able, in addition to oxygen, to breathe chlorine or hydrogen sulfide?
2
Can a carbon planet form within a silicate-based planetary system?