What would cause turkeys to be intelligent?

In the spirit of Thanksgiving (US) let's tackle a fun one.
I'm defining "intelligent" in this situation as "at least on par with hunter-gatherer humans, able to communicate"

What natural, environmental pressures would cause turkeys to evolve intelligence, based on the pressures that cause intelligence in the real world, assuming up until this point that turkeys have been developing as normal?

BONUS: How would this change their morphologies?

This is somewhat on-topic as it provides useful information for worldbuilders seeking to design intelligent avian species.

Not a dupe of this question because I am asking about a specific species, not general avians, and I am focused primarily on how the environment would change the evolution, not how the morphology would change the species over time - which the other Q does not address.

So the question is: what kind of evolutionary pressure would cause one particular species of an entire order of animals to develop intelligence — while other species of the same order do not — to the point of surpassing most primates and be second only to that of the genus Homo.

Unnatural selection. That would happen only if a more intelligent species bred them selectively, either by actively breeding them or by selectively weeding out the unfit ones.

As has been pointed out: turkeys are very fit as it is. There is no distinguishing feature in turkeys that can make them the target of an evolutionary pressure that will afflict no other fowl. They would need to be targeted by something that weeds out the unintelligent ones, and only in turkeys. That will not happen on its own, there needs to be an even more intelligent species that is doing this to them.

...over several millions of years it should be pointed out.

We select for it

Every year, the President of the United States pardons a turkey. Right now, we can safely assume it is a randomly chosen turkey, but surely this extra opportunity to breed does not go unnoticed. A turkey that is slightly smarter than the rest would find ways to happen to get picked. Assuming the United States continues to exist for a few million years (no pressure, guys!), intelligence will prosper.

Of course, such intelligence could eventually be seen as a threat. Thus I would expect the morphology of a turkey to adjust to be less threatening in appearance. Similar to how the kitten is cute and innocent and lovable, but the *#(@# cat knocks over the *@#$$# water glass every @*(#$!$@ time!

ahem. Sorry about that.

Accordingly, I would expect their morphology to change to something akin to a kitten. We love big eyes, so perhaps: 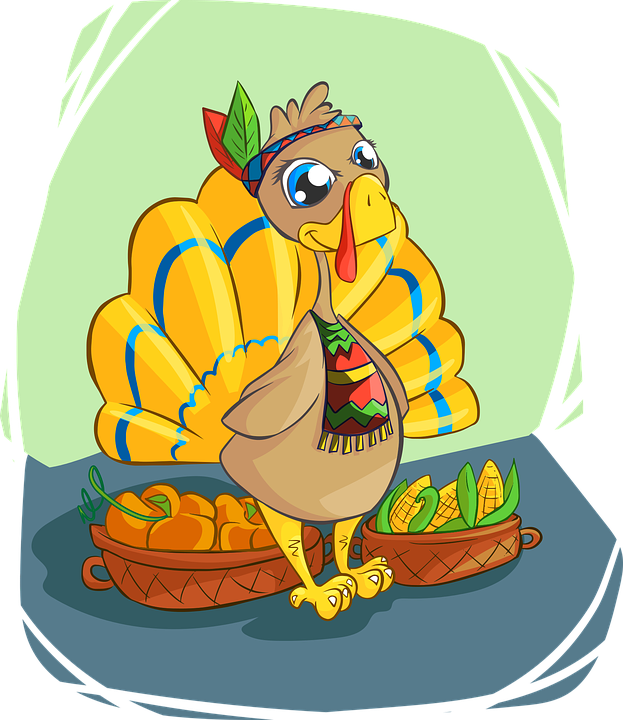 Well, wild turkeys are actually very fit. I could imagine that through natural selection, that a turkey might evolve to have some hunter traits, the reason being is that given two turkeys, one who can only forage, and another turkey who not only can forage, but has learned to take advantage of a situation, and developed a taste for flesh, the later will be more successful ultimately, because it is more versatile. The ability to "Imagine the future" is what leads the turkey to sentience. Imagination is the essence of planning and strategy, fear and hope. A turkey who could learn to take advantage of situation, can "imagine" how to create the situation, thus making sentient turkeys who hunt. The making of weapons would come next, and would surely be interesting because of the lack of hands. Those weapons would be shaped by beaks and talons and designed to hunt smaller animals. But occasionally, turkeys might build traps for other larger animals that might be predators of the turkey tribes. Natural selection would favor the faster stronger turkey, and I could imagine the turkey wing becoming stronger over time, as those with weak wings might break during the hunt and become lame and die. Eventually, the turkey wing would be strong enough to break human bone and yet remain light enough for flight.

Human species evolve from primates, and we know that some species of primates already knows how to use a simple tools like sticks and stones. Primates are also knows hierarchy, and develop a strategy a traits that usually seen on hunter type animals. All of these traits are what we can suspect as some of the foundations of our evolution, and even among all that share this traits, we can say until know that we don't know any other species like ours.

And I provide two alternatives for them:

And when its happen, we wouldn't seen them as a turkey anymore. They wouldn't have their useless but delicious wing anymore. Maybe they would look like some crooked trolls with a beak, and governing a worm farm.

To become naturally intelligent, turkeys would need to go along many of the same pathways as other intelligent species on Earth.

Hunting or being omnivorous would seem to be a good fist step, since they not only can access more and different sources of food than the competition, but also would need to develop some intelligence thunk prey and find and exploit different food sources.

Most intelligent animals on Earth also are social, living and working together in groupings like troops, packs and pods. Being social and cooperative seems to be important in developing sophisticated communications between members which leads to language. A flock of photo intelligent turkeys would resemble a troop of baboons, perhaps, more than a standard flock of birds.

As for morphology, the turkey will loose a lot of its bird like features and develop in ways which support both the new lifestyle and a brain large enough to support intelligence. The "face" will become more like that of a raptor with forward facing eyes and other adaptations to support hunting (a serrated beak, perhaps) or omnivorous behaviour (a beak sharp enough to cut chunks of meat from prey but also strong enough to crack nuts or seed pods).

This evolution was simulated with a species of dinosaur called the Troodon, which would already have been much smarter than a turkey to start with. A hypothetical intelligent descendant of the Troodon is illustrated below: 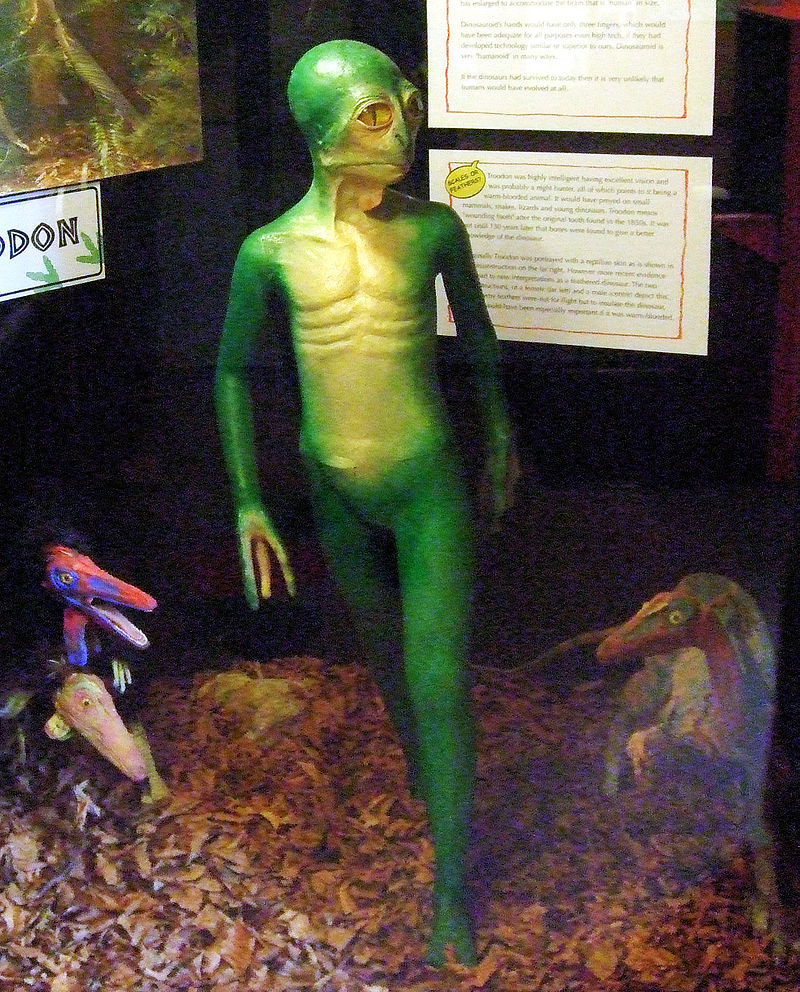 We now know that most dinosaurs were covered in protofeathers, and the Troodon was theropod (the ancestor of birds), so would have likely retained this feature for warmth and sexual display. It is also quite possible that the evolved turkey would be more bird like than this thought experiment, for example retaining a longer tail for balance but having wings become vestigial and manipulating objects with the feet instead. 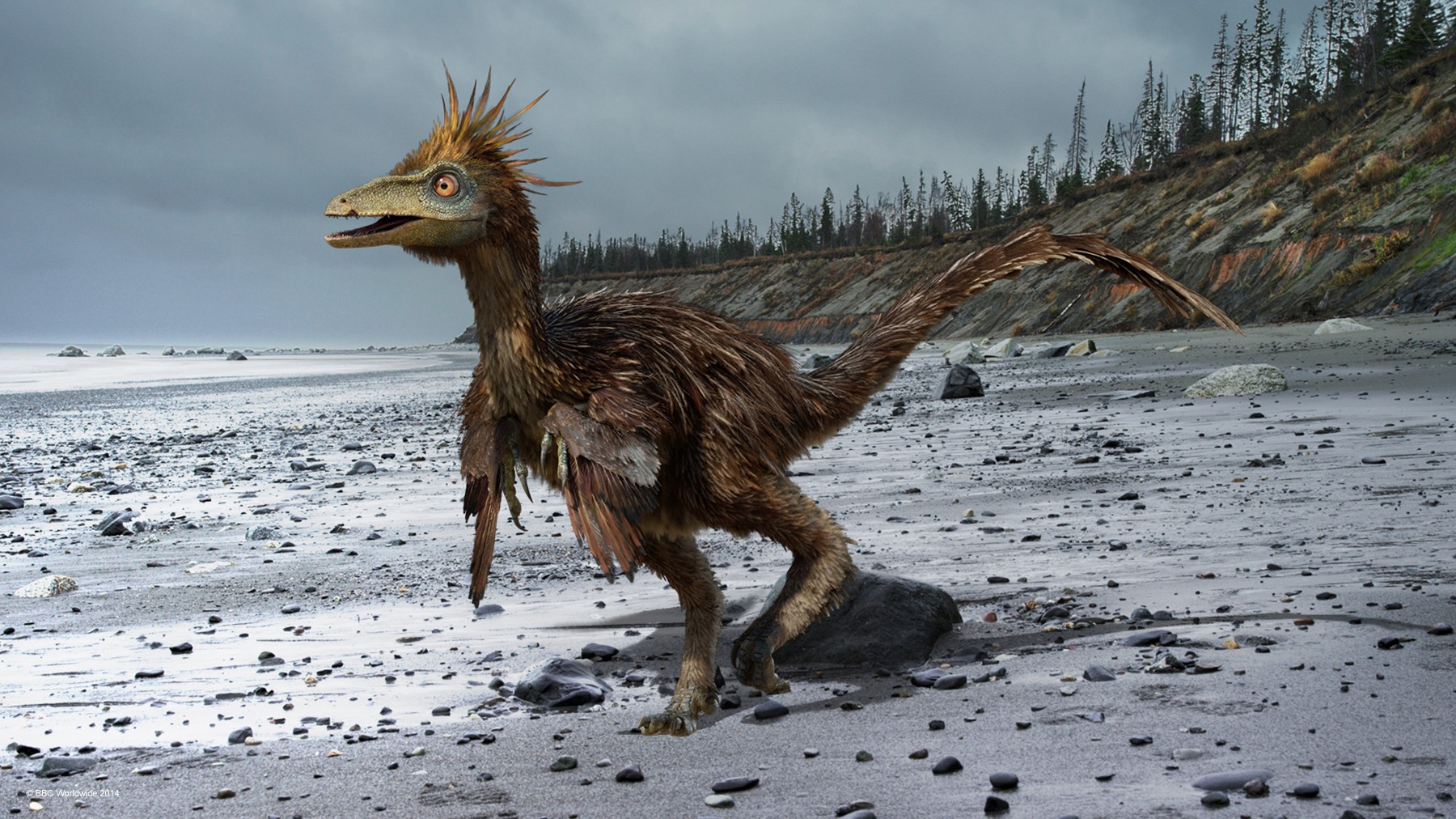 Reconstruction of a Troodon. An intelligent Troodon might have a larger head and highly developed feet

A highly intelligent turkey would not be very appealing to the human eye, and the Ancestors would certainly have either tried to domesticate them in the distant past (like they did with wolves as the ancestors to dogs), or hunted them to extinction as an existential threat.

Not the answer you're looking for? Browse other questions tagged evolution alternate-history intelligence avian or ask your own question.

43
Why did dragons evolve to be smart?
42
What could cause an avian species to become intelligent?

42
What could cause an avian species to become intelligent?
10
Intelligent Animals Integrating into (Western) Human Society
9
Evolution bottleneck event leading to color changing humans
15
Let's evolve whales and dolphins back onto land
43
Why did dragons evolve to be smart?
3
What is intelligent life?
5
Could a species evolve to the point were they cause their own extinction