How would juvenile humans with few tools start mining? Or is there a reasonable substitute for metals?

My story is about a ship run by AIs that carries zygotes and sperm/eggs. The AI's find a planet, test it and start making babies in artificial wombs. Juveniles are tested and rejects are used as the first settlers. The brightest remain on ship and are educated to be medics, biologists, engineers and so on. So I have seven 'rejects' who range from 8 (Earth) years from six. More will be added every Earth year as juveniles are tested. All human knowledge is available, but little metal is available other than the ship itself. The planet was selected to have an earth-type atmosphere, water and a temperate climate. The ship can only sustain a small number of humans including infants, for say two hundred years -- but the humans have to be on the surface by the time they are 15 or 16 to allow for more babies on the ship -- so really the humans have to be sustained on the surface by the planet within 15 or 16 years from birth. I suppose I could add an on-surface nursery -- but really, I am interested in mining. These kids have to be able to physically do the work and process the minerals. If that doesn't seem plausible, could they use some material besides metals that could reasonably work for tool building and so on?

Have a workshop with 3D printers, a few other tools and a stockpile of things like computer chips that are hard to manufacture on a small scale. They can then use power tools for mining. If something breaks, they can fix it. Power can be obtained by processing biomass into fuel. Anything that burns can at least turn a Sterling engine.

On a newly discovered world, the AI is likely to find exposed ore and land the ship nearby. So mining won't be all that hard. However, you won't find all useful minerals in one place, so they may end up using iron for everything or having to travel long distances to collect different ores.

Supposedly a blacksmith can make everything metal starting with a furnace, an anvil, a hammer and a pair of tongs. But a 3D printer can do precision manufacturing, like making an engine, that would require an awful lot of tooling to get to.

The short story The Pirates of Ersatz, by Murray Leinster, besides being a very fun read, contains an interesting breakdown of what might be done with something like this, as well as resistance to thinking outside the box and what might happen when this resistance is overcome.

Bog iron has been used for a long time, all you need to harvest it a sharp stick and a shovel. Of course if it is a new planet, there are probably plenty of exposed surface deposits, so they would not need to mine as much as just keep an eye out and maybe do some searching. we have to dig on earth becasue everything on the surface has long since been harvested. smelting ore can be fairly easy provided there are not trying to make high grade steel. you can see a reenactment here, https://www.youtube.com/watch?v=Y_mTgHj6M1Q

I have access to all human knowledge, and have to produce iron in very primitive condition, I'd try luck with something like this: 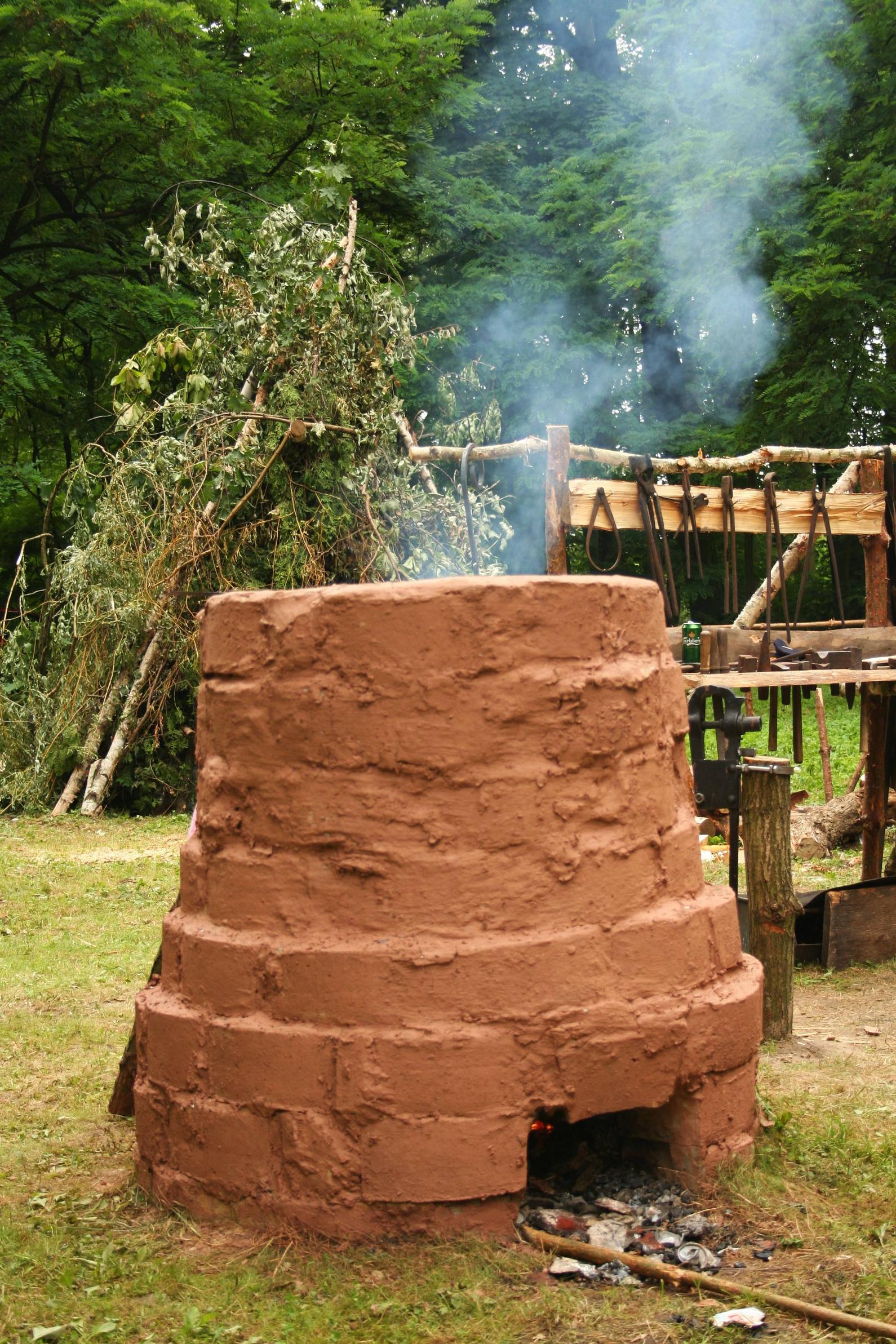 But I think that would be too much effort for a few kids...

Nevertheless, I see a few more choices: -Provide a few durable tools at start from the ship. (maybe ex. just blade, and add the rest)

-Make something out of stones, bones and stick; and concentrate on building some shelter and starting primitive farming or domestication of local animals. (that's the priority, let those smartass, priviledged engineers to wonder how to produce steel...;) )

-Does this space ship have any engine used for landing? Is it needed anymore? If not then I just found a source of metal... ;)

If your kids have to survive on a new world, then the 'advanced' skills that are being taught on the spaceship seem like they will be of marginal value at best. Even training as a medic is only semi-useful without practical experience and modern medical supplies (clean cloth bandages, alcohol or something to sterilize wounds, etc). The best you can get is for the colonists to take some anti-bacterial precautions, like boiling water, not pooping where you eat, etc, but most of those things hunter-gatherer types already have on lock. Biologists and engineers seem even more useless.

The basics of survival would be food, shelter, and water supply. Since you mention that there is no metal available, I assume the ship did not bring any building supplies so none of these tasks is completely trivial. Your children-colonists need to learn how to farm or hunt or both, make pottery for cooking vessels, build wind, water, and winter resistant shelters, make some sort of clothing, and possibly dig wells.

Unless and until you account for those things, the 'training' on this ship is of minimal value, and metals are not needed at all. Once those basics are taken care of, and a food surplus is created, then it becomes worthwhile for your ship to start training people in higher level activities.

And by higher level industry, I mean simple manufactures. Things like spinning and weaving, leatherworking, quarrying and stoneworking, metallurgy, domestication and animal husbandry; the basic set of bronze age skills.

In conclusion, your ship needs to start training people the basics, and then teach bronze and iron age skills like metallurgy to the second generation. At that point, the simple bloomeries and bog iron techniques mentioned by other answers will be useful.

Early humans didn't have metal. Stone, bone and wood hardened on fire are adequate substitutes for primitive survival and even farming, although metal certainly makes superior tools. As some users have pointed out, some metals require very little technology to gather and utilize on a primitive environment. So its up to whenever you want to give your kids metal or not. Give them easily available surface metal near their landing location, and there's little reason for them to not use it since they have the knowledge and it will make better tools.

Without easily available surface metal, they probably don't need to worry about it for several years, until they actually have spare people who can run around looking for metal safely. A starting group of seven small kids probably can't afford that.

Probably it should be a comment, but ... TL;DR; Use the explosive, Luke.

You have to keep in mind that tools which are used in metal gathering, produce more metal as result then it was used to build them. Would it be other wise, we would not have all those milliards tonnes of metals which we have now.

Another point is, we use different methods to extract metals or produce them from ores - do not forget about basic chemistry and electrolysis.

If ship have thermonuclear engine, and thermonuclear fuel, I would not say that it is a stretch to expect maybe 2500 tonnes of thermonuclear fuel in his tanks as vapor, considering doom of rocket equation, even for a ship carrying only eggs. They claim that 25 tonnes of He3 is enough to produce energy for US for a year, and such energy budget is very reluctant way to start a colony.

Thermonuclear engine can be used to refine and separate Any materials to its elemental composition in bulk quantities. You pour sand, or water, or clay whatever you find - and get Si, H2, O2, Al etc in bricks as output. In ratio about ten millions per fuel by mass - one tonne of fuel, 10 or more millions tonnes of "bricks" sorted by isotope mass.

Do not forget that pickaxes is not the only way to handle mountain rock - explosives work well too, and are used today to handle that kind of stuff, pickaxes use is very limited in today's mining industry. Even more, to make a explosive which may be used in mining you do not need chemicals or metals at all. You still need equipment, hm ok I would not say it will be much easier then just old chemistry, but. Mixing organic plant matter with liquid oxygen makes what one may need for mining - and it was used in old days - turf+liquid oxygen - put that thing turf in a bag in a hole and pour liquid oxygen when you are ready, and use a long enough fuse, but I see why they do not use it any more, just not so convenient.

Just black powder is good enough to be used as explosive in mining - and there are primitive ways to do it. Both videos form same guy, this and this, he have also amateur mining videos times to times - so you may take look to be more familiar with the topic.

I understand it may not fit in you survival premise, but machines are used to produce even more machines, because they are efficient at extraction of resources, and they loose small percentage of it during the process, we just trow more away then they loose as dust which we do not bother to collect as it not worth it. We loose more in the rust which we do not bother to recycle. Check that video, same guy, this kind of equipment will lasts for long long time and produce way much more materials then it was used in its production(of course if you find a vein of ore). And this equipment is not a super high tech, and can be reproduced on pretty simple equipment.

It may be worth to read wiki article Mining

Black powder was first used in mining in Selmecbánya, Kingdom of Hungary (now Banská Štiavnica, Slovakia) in 1627. Black powder allowed blasting of rock and earth to loosen and reveal ore veins. Blasting was much faster than fire-setting and allowed the mining of previously impenetrable metals and ores.

also, if you do decide to go with mining, rock can be slit with water and wood that swells with water. or water that freezes. or there could be some crazy plant life that break up the convenient rocky outcropping of the needed ore.

They can start by making wood and stone tools. Those supplies are easy to come by. That should hold them over until they can make metal tools that will last longer. So, an axe to chop the wood and a knife to shape it.

Metals can be mined with a pick like the old miners did. As has been mentioned, metal should be pretty close to the surface if you can find it in the region.

So, the minimum tools would be an axe, a pick, and a knife. Everything else can be found or made.

A shovel and a saw would be handy too.

Not the answer you're looking for? Browse other questions tagged mining or ask your own question.