I had an idea about a weapon which kills people using radioactivity bursts:

Requirements for the weapon:

Can you help me with designing this weapon? Also, is it even feasible to build?

Radiation fails on all counts. It will certainly kill people but not immediately and indeed they may not even be aware of receiving a fatal dose untill you get into the realms of particle beams which will actually put holes in them and even this it would need to be a big hole (there are in fact accounts of people who have had holes burned right through them with particle beams and not immediately noticed).

It is also entirely possible to receive a fatal dose of radiation and continue to function normally for a reasonable period of time.

Wearable: Somewhat
You may want to research radioactive substances and how they're made - depending on what bullet material you pick, the attacker may or may not need a cyclotron to make bullets on site before the bullets decay. Unfortunately cyclotrons are not wearable. However, a gun and a briefcase of bullets may suffice for other isotopes if the bullets don't decay quickly.

Safe to User: Somewhat
They must take precautions to avoid poisoning themself, but after that, it should be safe.

Quick death: Somewhat
Radiation kills through tissue death, so, depending on what isotope you use, it may or may not kill tissue quickly.

With adjustments and some stretching, this is feasible.

Consider basing your machine off of external beam breast cancer radiation. It's a process that targets specific areas of the body (usually breasts) with enough radiation to kill weaker cancer cells, but not enough to cause significant damage to surrounding healthy cells.

It is completely within the realm of modern science to use a more concentrated or more powerful beam that affects normal, healthy cells, causing tissue death.

While this is not ideal for several reasons, which I will go into detail about below, it is probably the closest thing modern science has to "controlled radioactive bursts".

Wearable: No
This is what the cancer treatment version of the machine looks like: 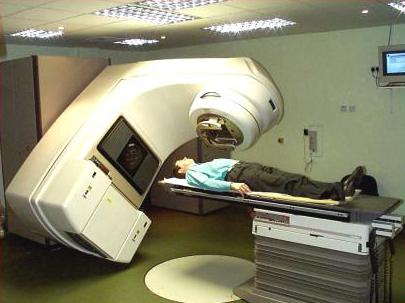 Obviously this is too large to compact into a wearable device with today's technology - you probably won't find any type of radiation besides a projectile that doesn't take up a lot of space.
Alternatively consider mounting a device inside or on top of a vehicle, inside the wall of a building, or whatever is necessary for the situation you want.

Safe to User: Yes
As long as the person employing the device is not directly in front of it, the radiation produced will not harm them.

Quick firing: Plausible
This type of device is used over weeks to target specific areas safely. Your concern is not safety, so with a concentrated beam, it may take seconds or minutes of standing in the path of the device for considerable damage to be done.

Quick death: Not possible with radiation
Even the strongest radiation poisoning takes some time to break down cells. Your best hope with today's technology - on a portable weapon - is to cause tissue death, in the brain, heart, or lungs.

Multishot: Does not apply
Radiation is usually applied in beams, not bursts. This will be true for most answers to this question. However the beam can be maintained.

Today's Tech: Yes
All of this is based off of existing technology.

One Person: Yes
If we can already concentrated beams of radiation, there is no reason it won't work for your device.

Ranged: No
See my other, projectile-based answer for ranged radiation - but generally radiation doesn't work well with range. Unless you're detonating a bomb or melting down a power plant, it's very hard to target radiation over a large area.

If you want "fast" acting radiation sickness, forget about it being localised, or safe. Levels of radiation that are instant (i.e. onset within seconds to minutes from exposure) require extreme levels of radiation, and not just any type of radiation, but either fast neutrons, or gamma emissions (as they are most energetic ones). For prompt effect you will want 6-8 thousand rem of prompt, full body exposure equivalent, which is basically putting a person in front of a industrial- or weapon-grade criticality event. Like this one: https://en.wikipedia.org/wiki/Cecil_Kelley_criticality_accident or https://en.wikipedia.org/wiki/SL-1 (warning: descriptions are graphic, and might be unpleasant to read.)

Both incidents involved very large amounts of enriched fissiles, and a critical configuration of them, and its not really possible to direct that kind of high energy outputs on a single person, w/o affecting everything in general area.

While there are good answer as to why it can't be done I'm going to back up and look at the big picture.

Alpha--very short ranged in atmosphere, it can't meet your range requirement. Beta--does a bit better but it still can't do anything like 100m.

X-ray & Gamma ray. The big problem here is that we have no means of focusing these. All devices that produce a "beam" of these do so by using an omnidirectional source and shielding off the part that's not going where you want it. That shield is big and heavy, thus making it impossible for one person to carry.

Neutron. Again, a focusing problem. Neutrons lack a handle to grab. Now, it is possible to make a neutron beam but that involves accelerating a charged particle stream and then somehow splitting the neutrons out once the beam is already underway. That's in atom-smasher territory and atom smashers are characterizes by their huge booster rings. (Absolutely necessary--the smaller the booster ring the faster the particles turn and if you make too high an energy particle turn too fast it loses energy. Thus your energies are limited by the size of the booster ring--you're not packing much in a booster ring you can hold in your hands.)

Now for things other than the traditional types of radiation:

Proton beam. See my argument about neutrons. Pretty much the same equipment. I also question whether it can go far enough in atmosphere.

Now, if you'll drop the portable requirement it can be done. There are two means of building an x-ray laser with today's tech.

The simple and small one is utterly out of the question for your scenario. A properly-shaped rod exposed to a sufficient energy flux can laze and produce a death beam. Both x-ray and gamma ray beams are possible. The problem is that we have only one means of generating that energy flux: the detonation of a nuclear device.

The other alternative can only produce an x-ray beam. I don't recall most of the details but it's a free electron laser--and the power source is a sibling of the atom smashers. IIRC your ring is about 1km across.

However, after shooting down your weapon how about an alternative that still doesn't meet your requirements but comes a lot closer:

Lets consider a microwave beam--sibling to the mundane microwave oven. A microwave oven puts out something like 1kw, not a good thing to be exposed to but it's not going get a kill fast enough for combat purposes. Lets beef it up considerably, if your focus and aim is good 100kw should do the job. That should give you a kill of the flesh to the penetration depth of the beam over a target the size of a human head. While the actual dying will take time you have a combat kill as any of their sensory organs pointed your way is gone. (You have to shoot from in front of them to make this work!) 100kw and the focusing dish are way beyond what your soldier can carry but I wouldn't be shocked if this could be built as a dedicated vehicle weapon. Slow firing, though.

(On the other hand, I can see no reason to build it other than for reasons of stealth.)

No, it is not feasible, because radiation does not kill quickly

Forget all Hollywood myths about ionizing radiation. In movies people get a dose of radiation and — hurgh — they die. That is not how it works.

In real life, if you receive a lethal dose of radiation, what happens is usually:

In order to have any instant incapacitation you need to reach doses of 8 to 30 Gray. Even for the firefighters at Chernobyl, that were wandering around among the pieces of a wrecked 1000 MW nuclear reactor, it took them several minutes to reach that dose.

So for practical reasons: no, you cannot make something that instantly incapacitates one person.

You could make something that targets one person and makes them ill enoigh to die from radiation poisoning. For example. Alexander Litivenko was poisoned with Polonium-210. But the process is slow. So what you have done then is essentially just make a plain old poison weapon, the only difference being your mechanic of destruction is radiation instead of a chemical.

Your next wish is that you wish to target only one person, and for the weapon to be "safe" to use. Well there you have the same issues as if you were fighting with chemical weapons:

You asked for a reality check... and that check says: no, this is not a feasible wepon at all. It is hard to get materials that "shines" that strong; it cannot kill quickly; it is extremely hard to make it so that it targets individuals while avoiding collateral damage; it is a safety nightmare in that you must handle it carefully or the effect will blow up in your face; if you miss (or hit for that matter) you will have poisoned the surroundings which may be a hindrance to you.

Not the answer you're looking for? Browse other questions tagged reality-check warfare weapons radiation radioactivity .

3
a ranged weapon only powered by electricity

9
Ranged weapon that can shoot through obstacles without destroying them
37
How can I liquefy my enemies?
11
How would the rules for carry and use of weapons be affected by reliable stun guns?
8
Feasibility of an insect sting weapon
33
Would 'magic' muskets be a significant advantage over actual muskets?
18
Chainsaw airplane: Feasibility study
2
Handheld Speargun used out of water for manhunting
2
Enhanced Brain Function Due In Utero Drug/Steroid Exposure
2
Designing a low technology flamethrower with limited resources