How would merfolk store and preserve their food?

I've been reading this question about agriculture for merfolk and more specifically the accepted answer. They mention the problem of food preservation only minutely. Now I'd like to pour that thought into a question proper: How would an aquatic species store and preserve food? Let's assume that the main food sources are fish, followed by kelp/seaweeds and shellfish.

Some ideas I had myself, but they don't touch on storage or may have flaws I'm missing:

Storing and preserving food should be one of the easier tasks for merfolk.

There are some places undersea that are excellent environments for preserving organic matter. For example, cold, low oxygen parts of the bottom of the Black Sea, Per National Geographic:

In most seawater, wood and rope are among the first things to decay. But the unusual water chemistry of the Black Sea dramatically slows rates of disintegration. Many of the shipwrecks that Adams and his team found were in depths below 150 meters, and some lay as deep as 2,200 meters below the surface.

The wood of some ships was so well-preserved that chisel and tool marks were still visible on individual planks. Rigging materials, coils of rope, tills, rudders, and even carved wooden decorative elements have survived the centuries largely intact.

“Nobody has seen anything quite like this before,” Adams says. While historical texts and illustrations give some information about the appearance and construction methods of merchant ships in different periods, Adams hopes the extraordinary preservation of these wrecks will allow archaeologists to independently verify those historical records.

British and Irish bogs and similar, muddy, shallow water, low oxygen environments are also good place for preservation of food. Researches have recently recovered 3000 year old butter stashes in these bogs. At that point it isn't yummy, but it is still edible. There is a picture of it below: 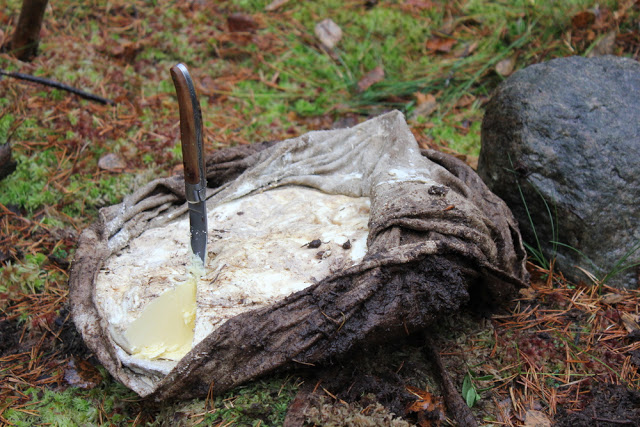 Honey can also make an excellent long term preservative (also thousands of years) and being underwater where it is cool, protected from light and is protected from bears and insects and people who like to raid and eat it (sea animals don't seem to have as much of a sweet tooth as land animals do), are all a good fit. Obviously, the merfolk couldn't make honey themselves underwater, but this could be something that the desire as a trade good in exchange for something else.

And, of course, don't forget one of the most common premodern preservatives, which is salt: salt meat including beef and fish are some of the oldest foods with long shelf lives and the oceans have an abundance of salt.

Salting, either with dry salt or brine, was a common method of preserving meat until the 19th century. It was frequently called "junk" or "salt horse".

Salt inhibits the growth of microorganisms by drawing water out of microbial cells through osmosis. Concentrations of salt up to 20% are required to kill most species of unwanted bacteria. Smoking, often used in the process of curing meat, adds chemicals to the surface of meat that reduce the concentration of salt required.

Salted meat and fish are a staple of the diet in North Africa, Southern China, Scandinavia, coastal Russia, and in the Arctic. Salted meat was a staple of the mariner's diet in the Age of Sail. It was stored in barrels, and often had to last for months spent out of sight of land. The basic Royal Navy diet consisted of salted beef, salted pork, ship's biscuit, and oatmeal, supplemented with smaller quantities of peas, cheese and butter. Even in 1938, Eric Newby found the diet on the tall ship Moshulu to consist almost entirely of salted meat. Moshulu's lack of refrigeration left little choice as the ship made voyages which could exceed 100 days passage between ports. 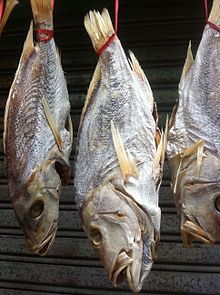 @John also has a good point about live storage. Most Asian grocery stores in the U.S. sell very fresh fish and seafood by having at least some varieties live in tanks in their stores until it is purchased, and this would be a natural approach for merfolk. 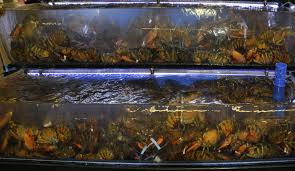 Live lobster storage as a grocery store via Wikipedia

Pickling is the process of preserving or expanding the lifespan of food by either anaerobic fermentation in brine...

The rest is just academic. You can pickle things by soaking them in brine. So pretty much everything that merfolk are going to eat is going to be at least a little bit pickled. Any developing merfolk society is going to probably start from pickling and develop other food preservation methods from there.

Vinegar is an obvious next step, since that is the other main component of pickling. Vinegar is produced by bacteria fermenting foods, so there is no reason it would not work underwater. The challenge would be to make a watertight container that you could put your fermentation materials, along with seawater, to let the bacteria do its work.

Once you have a container full of vinegar, you could use a hand pump to move it to another container with things that you want to pickle. Conceptually, it seems hard to think of a good way to transfer liquids between containers while immersed in another liquid, but I have confidence that merfolk growing up in such conditions will have more imagination.

The list of things you can pickle is long, but importantly, contains both fish (delicious pickled herring) and seaweed (like Japanese su kombu).

live storage is always an option, cages would let shellfish feed until you are ready to eat them, they work fairly well for fish too.

Come up with an algae, or kelp, or the skin of a particular fish. Something that has antibiotic, or whatever, properties and a relative large surface, and have your merfolk wrap packets of food with it.

Not the answer you're looking for? Browse other questions tagged reality-check food underwater merfolk .

13
How do merfolk develop agriculture