What would be the consequences of humanity migrating from land to water?

I'm constructing a world where the humanity had to migrate from land to water somewhere in antiquity. In this world, humans are living on seas and rivers. They live both on pier-like and other fixed platforms near the coast as well as on rafts strung together into larger settlements offshore. Fishing and sea-plant farming (algae etc.) are the main sources of food. Ships and boats are pretty much the only means of transportation.

The land still exists (topography is the same as of the real world) - no "Water World" scenario. However, humans only visit it for brief periods (several hours, maybe up to half a day) and only to hunt/gather/acquire wood and other land-only resources. There are no permanent human settlements on land.

If you're curious about the reasons for this (which may or may not be relevant to the answer), check out the sister question.

The merit of this question are the consequences, primarily for technological advancement but also social and economic structure.

Note that this answer reflects a change from the actual situation of classical societies, and doesn't take a specific cause into account.

Note also that this answer is written from a largely western perspective.

The largest changes would be:

There could be some small scale agriculture near the sea, but your scenario might preclude this all together.

Either way, you may find this map helpful: 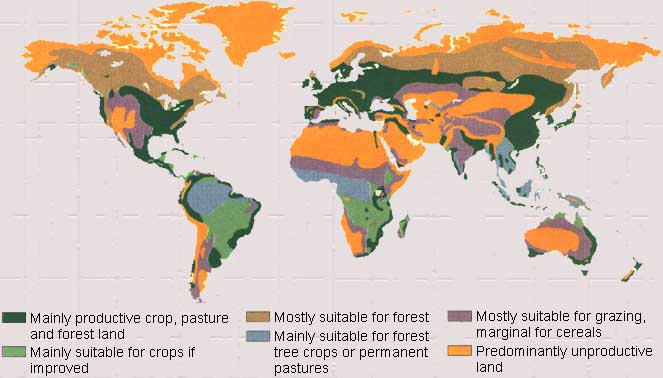 There are myriad of implications here, the most obvious ones are potential vitamin deficiencies, and the fact that populations can only live on what the coast and seas can naturally provide.

This limited population would severely reduce the development of technology. An overly large percentage of this small population would spend their time acquiring food or trading, leaving very few (if any) people to learn, teach, investigate, and invent.

Smaller populations have always been more close knit. It is also likely that every member of the tribes would be essential to the survival of the water tribes. You might find parallels with the early hunter-gatherers, though you will have better initial technology.

It is likely that you will have decentralised, almost anarchistic tribes, ones with few social conventions (think about male-female relationships [women are less likely to be devalued]), and close family ties.

Young people would be inexorably bound to the land, questioning the wisdom of staying on the sea, mixed with the lust for adventure that young people have. Though this might be suppressed through tribal ties and the demands of hard work, if you have any young people at all in a privileged society, they will set out, or try to at least.

The Greeks were the best sailors of the world. Captains would likely pass on their trade to their childeren or other successors. Sea travel in ancient times was the most efficient way of travel. The tribes would likely be heavily mobile, and even trade routes between the Americas and western Europe are not unlikely. In this scenario, whomever rules the waves, would rule the world.

Before the advent of the Romans this was the Greeks, but the Romans only came into prominence due to their large population, which is less likely in this scenario.

That said, the Romans are the ones most likely to successfully adapt to new situations that require innovative technology within the scientific limits of the current society.

The Asian civilisations has less developed nautical technology, but it is likely that this would change rapidly. The large pastures as the east of china, and large amount of islands in Indonesia would ensure that the Eastern region would maintain its high level of development compared to the rest of the world, with a booming trade and a relatively high amount of food. An Asian dominated society would be more likely during the development of this scenario.

In other words, the Chinese Sea would be a very useful base of civilisation in this scenario.

Ships were always at the frontier of trading, and trade would likely flourish. This would drive different regions to specialise in the development of specific near-coast goods.

The limited amount of people would make war unlikely, and trade would rapidly flourish worldwide.

Now if you can think of a way to increase the population after those trade routes have established:

The development of technology depends on: -Need, -Materials, -Availability of scientists, -Trade.

Two of those are in ample supply in your scenario. Unfortunately as I wrote earlier, limited food supplies are a major concern, and hunting and gathering is not an effective way of getting food.

The second problem, materials is also rather difficult. You will need lots of copper and tin for a bronze-age society to prosper and progress. I.e., you need mines.

If these concerns can be overcome, and population growth can be sustained, you will see a rapid advance in technology.

The difficulties of the situation would lead to a severe need for the development of on-water architecture. It is likely that the more intelligent people would be chosen to study architecture to build ship, on-water cities, and machines to help in the acquisition of materials from the brief on-land stays. This can help the development of technology of course, but as with the Roman empire could lead to a stagnation of scientific development outside of these specific requirements.

Wood is of course more readily available, and it is likely that you would see the developement of large wooden cities on the ocean. Wood can be treated against rot, but the disintegration is still going to be a problem. If there is any available metal, it is likely that -heavier than water- materials on water would be quickly utilised.

If no metal is available, the cities would need to be smaller, and large parts would have to be constantly maintained. Disaster would never be far away, and fire would have course be highly regulated.

The first cities would likely be formed by tying boats together. Romans would have a clear advantage here. The Romans were excellent ship-builders, and highly inventive in naval architecture.

It is also possible that reefs and rocks would be used as a basis for the cities.

Very large wooden structures are extremely difficult to create, and are very prone to simply being torn apart by the sea, so expect different structures tied together, rather than one massive whole.

Of course the highest up resources would be easiest to find, so that would be Cobalt and Platinum.

A note on specialists

Note that the need for specialists (architects, maintenance crew, sailors, captains) would not necessarily lead to stratification of society, don't forget what I wrote earlier about the tribal nature of society.

It is likely that captains of trade and fishing ships, and other educated specialists would be respected elders of the tribes, but not outright civil leaders.

If "some time in antiquity" was long enough ago, you may find evolutionary changes in the human body. (Blue eyes are only about 20,000 years old, for example.)

The current average human body can be trained to hold the breath under water for 5-6 minutes (the average recreational freediver can do this) and professional freedivers (such as pearl divers) can be down for 20 minutes or more.

Small evolutionary changes in oxygen efficiency could produce human beings who can dive for as long as dolphins can.

They will most likely be limited to living in groups of 150 or less (as all humans did before agriculture), but these groups can assemble for short periods of a month or so every year if everyone brings enough dried fish and seaweed to feed themselves.

Assuming intelligent human beings spending a lot of time hunting and gathering under water, there would be a lot of inventions based on using water, assisting swimming, etc.

Using fire to cook might be tricky, but an alternative could be soaking food in an enzyme bath that pre-digests it, or neutralises poison or bitter tastes.

Selective breeding of sea creatures could produce living "tools" - fish with sharp "swords" that can be used to cut things (whether by domesticating the living fish, or by killing it and harvesting the blade). Sea creatures now excrete acid, produce electric shocks, squirt ink, etc, etc, etc. All these resources could be harnessed by creative humans.

They may live in close co-operation with dolphins, much like land humans with dogs. There is a lot of scope for imagination, here!

You may interested in learning about the Aquatic Ape Hypothesis: it may have happened already. Some physical adaptions of the human body (hairlessness, subcutaneous fat, shape of human hands and feet) can be explained be a semi-aquatic period in human evolution.

Not the answer you're looking for? Browse other questions tagged alternate-history sea .

34
What could cause humanity to migrate from land to water?

5
How would a world with an extremely high water level and only a small land mass differ from Earth?
8
Corrosive oceans and seas - how would this affect our world?
2
What would be the consequence of higher oxygen level in water
34
What could cause humanity to migrate from land to water?
4
What are the effects of building an artificial land bridge connecting Britain to Europe?
22
Is this coral lagoon geologically possible?
4
How would a corrosive sea not erode the foundations for islands?