Is it possible for a temperate forest/freshwater area to form within a desert?

I am imagining a temperate forested area with freshwater lakes, rivers, small mountains, and rolling grassy hills. This environment is situated within a very large explosion crater. Outside this crater is desert for miles in every direction. Under what conditions could such an environment develop and how would it be maintained (i.e., stopping the desert from "taking over")?

Assume that there is no artificial environment/dome within the crater area.

It's probable given the right circumstances

The most important thing here is water. Now there's actually quite a lot of water in most deserts, but it's in general hidden beneath the ground. Thus assuming your meteorite/explosion crater had a big enough impact, there's a fair chance that there's now a lake in the center of that crater, fed by underground reserves even.

Lakes? > check (well at least a big one in the center)

Now that we've got water we need to ensure it does not just evaporate and get carried away from our crater-oasis. Assuming a big enough impact we should have walls/sides tall enough to force at least part of the evaporated water to fall in the form of rain again. Thus we get a distribution of the water over a bigger area as needed (alas unless it's been a truly tremendous impact, some of the water will be lost and carried away permanently..)

Rivers? -> probably (there will at least be streams and brooks)

Now the mountains and hills thing is something else. As this is a crater made by an explosion, it will resemble a huge bowl most likely. So tall hills and little mountains will be restricted to the rim of it, alas these walls could be as tall as you manage to get them, so there's your mountains.
Additional thoughts thanks to @Zxyrra: As we've got a weather-cycle going, we can add more lakes & ravines coming from the crater sides towards the central recess; thanks to erosion.

Mountains? Hills? > well, we have crater walls. That counts for something, right? sure!, just make the whole thing old enough.

So there you go. Having a forest & grasslands inside a huge crater is definitely probable; Though the real question is how you got that crater in the first place?. You know, without blowing the planet up or at least destroying all life on it.

There is also a fairly common effect where you get a hill/mountain in the centre of the crater lake, because the ground "splashes" up after the impact. (This is Manicoagan Reservoir in Canada. You can see a little of the crater rim in the top right corner.) 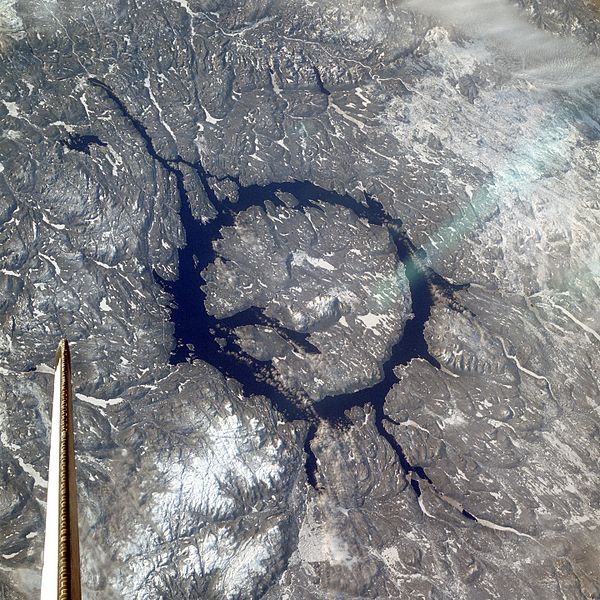 Not the answer you're looking for? Browse other questions tagged science-based environment climate .

4
How could a very strong impact on a planet create deformations on the opposite side?

13
The shortest possible distance between a boreal area and a hot desert?
3
What would be the major weather patterns on this map?
7
Constructing a desert area
4
Desert Planet Realism - Minimum possible hydrosphere
6
Can a planet have warm or temperate climates within its polar regions?
10
Time estimate for converting desert to savanna/forest
4
How to explain the presence of tropical rainforest and temperate forest at an equal latitude near the equator, in a fictional world?