An Australia for Egg-Layers (No Marsupials)

Without a doubt, the most iconic mammals of Australia are the pouch-bearing marsupials. You can find less than 250 species in that one island-continent. 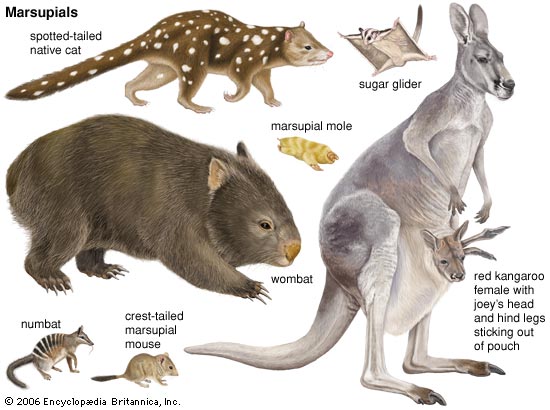 Marsupials have been around for 65 million years, and they are all that's left of a much larger clade called Metatheria, the entire bag of pouch-bearing mammals.

However, Australia is also home to a smaller, more ancient order of mammals--the monotremes, the only extant mammals to retain their reptilian ancestral trait of laying eggs.

In this alternate history scenario, the metatheres either never existed or have been extinct for tens of millions of years, leaving the monotremes as the next best thing. Once there, considering that monotremes were never ecologically popular (only 16 species so far identified in the group's 210-million-year existence), will the egg-layers radiate into a vast diversity of shapes, sizes and characteristics? Or will they just be incomprehensibly alien variations on the platypus and echidna themes?

If the marsupials didn't exist, monotremes would be able to occupy these niches.

There was also marsupial megafauna when human beings and dogs arrived in Australia about 50,000 years ago, so there would likely be monotreme megafauna unless a large predator species arrived in the ecosystem.

If you don't have a large predator species, you will also have other species occupying the "lazy" ecological niches that are not viable in the presence of animals like cats and dogs, as they did in New Zealand - lots of slow-moving, flightless birds and big lazy lizards.

Of course, you could evolve a monotreme large predator. A megafauna Tasmanian Tiger with the poisonous foot-spears that the platypus has would be fearsome indeed! Or one based on the echidna ancestor that can shoot its spines like some porcupines can ...

You could potentially also evolve fully aquatic monotremes - they would just need to evolve some arrangement for carrying their eggs with them in the water. Since they already have a pouch, all it would take is an extra skin fold to direct the newly-laid eggs into the pouch.

It looks like you're wondering about the course of the monotreme's evolution. For a short answer? Yeah, if the monotremes were the dominant species in Australia, their evolution would explode with variety.

The first monotremes appeared in Australia about 123 Ma, and it was called the Teinolophos trusleri.

The first metatheres appeared in China some time before this, however, the first Australidelphia, which are the marsupials of Australia, would not appear until 55 Ma (the Djarthia).

In this beginning, the monotreme's evolution was formidable. In 105 Ma, the Steropodon galmani were around, a species of monotreme that was as big as a cat. This may not seem like much, but for the time period this was massive!

However, in 105 Ma, dinosaurs still roamed the earth. In fact, the T-Rex hadn't even appeared yet! It wouldn't be until the Cretaceous-Paleogene extinction event in 66 Ma that mammals would inherit the Earth.

If you had the great extinction wipe out the potential for the Australidelphia along with the dinosaurs, then you'd be set for humongous monotreme growth.

When you asked whether there would be a massive diversity of monotremes, without competitors to stunt their growth, the answer is a definitive yes. The marsupials came in and essentially stole the resources from the monotremes, stunting their evolution and causing most of them to die out. If this never happened, then monotremes have the entirety of Australia essentially to themselves.

With this in mind, the flourish of evolution that created everything from sugar-gliders to kangaroos, could have occurred to the monotremes instead. Sixty-something million years is a lot of time to create a vast array of shapes, sizes, and characteristics! (Just look at what the other types of mammals have accomplished!)

yes the egg layers would radiate into a wide range of niches and forms. The big thing is no whales or dolphins since they will still have to come out on to land to lay eggs.

Not the answer you're looking for? Browse other questions tagged evolution alternate-history mammals or ask your own question.

4
Prester John, Lord of Australia. How would he treat to the aboriginals?
4
Are there any outstanding factors that would prevent marsupials from evolving civilization?
5
Plausibility of seahorse-like marsupials where the male carries offspring?
2
Best Northern Australia location for a colony in 1700
9
Could Xenarthrans Be Ferried Outside South America?
3
The Fate of Marsupials in a More Southerly Australia
5
Could marsupials convergently evolve sapience?
2
Could an Ice Age Extinction Wipe Out All Marsupials?