I'm trying to build a semi-plausible world where there is native flora and fauna, but the world is subtly not quite right for human habitation. I thought that having significant amounts of copper in the water would allow for stunning visuals like this: 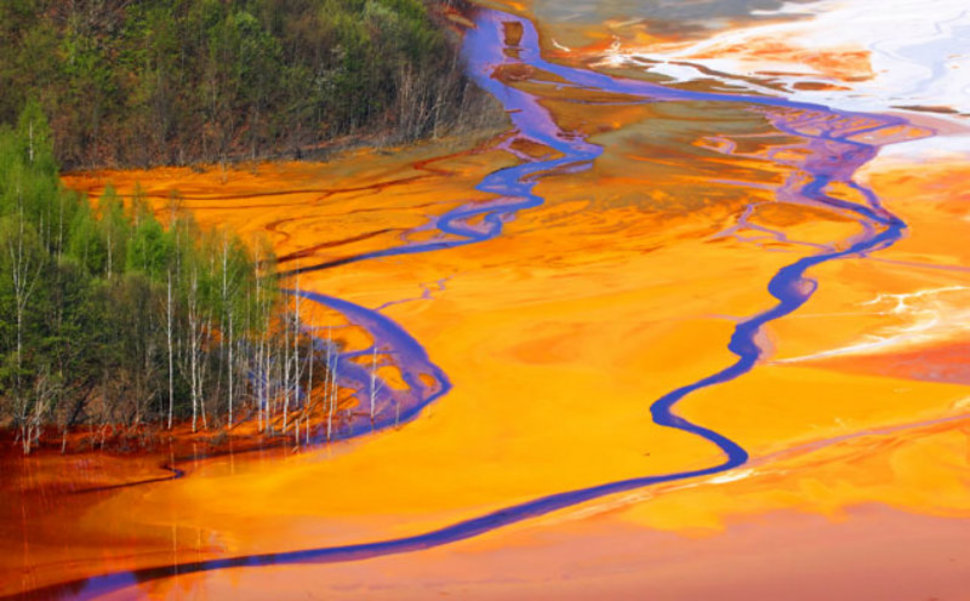 I'd imagine the trees would evolve to be slightly metallic or petrified, and the fauna would be able to filtrate the copper out of the water to survive. However there's just so much copper in the water and atmosphere (dissolved in the humidity) that it's too expensive for a high tech (but not post-scarcity) society to terraform properly.

Basically I want a world where people can move around but not fully settle. Does this premise pass the versimilitude test?

Copper is actually essential to biology, and in arthropods it is used to move oxygen in the blood, just like iron is in vertebrates. Once the native life started making oxygen in large amounts a lot of the copper is going to turn solid just like iron did on the early earth. You just won't have any in the atmosphere because copper is heavy and will get left behind during evaporation, it's the same reason we don't have iron in the air on our iron rich world.

So the native life would not be all that different than you expect on an earth like planet, the most notable difference is things would bleed blue instead red. so you life should have fewer reds and oranges, and more greens and blues.

As for humans the biggest problems will be copper toxicity so they will need to drink filtered water and eat crops grown in isolation, probably filtered hydroponics. Recycling water might be easier and absolutely no eating the native life. Good news is you don't have to worry about biomagnification, so they can have livestock as long as it eats the hydroponics too. Zinc supplements will be necessary since copper impedes zinc uptake. The biggest thing will be absolutely no aquaculture, fish and algae are far more vulnerable than mammals.

so yeah it's perfect for your premise, any settlement will have to be entirely self-contained, and food production will be expensive, so no real incentive to colonize other than to mine copper and study the life on the planet.

Not the answer you're looking for? Browse other questions tagged biology physics chemistry or ask your own question.

9
How does weather change on an earthlike planet with a denser atmosphere?
1
Water replacement on a world with a nitrogen-rich atmosphere
7
How would an ecosystem based around chemotrophs produce oxygen?
1
Secret Hangar Location Needed for Entropy-sensitive Nano-bots
3
Areas with high energy on an Earthlike world
13
Mass extinction because of too low CO2-levels
4
Is an earthlike planet with ammonia oceans even plausible?
6
Foraging behavior of a forest slime
32
Can we get rid of all illnesses by a year of Total Extreme Quarantine?