Feasibility of a Synthetic Buoyancy Bladder, Used in the Air

Many fish have specialized organs called buoyancy bladders which allow them to control their buoyancy - effectively rising or sinking in the water.

What if humans adapted this to use in the air? I'm picturing something like a balloon, strapped to the user's back, that filters specific gasses less dense or more dense than air to fill itself. It would be able to calculate what ratio of x to y was necessary to move the person up, down, etc.

A) Is there any reason this is not possible, and

B) If possible, what are the limitations / things to consider?

The issue is how are you going to inflate it.

A fish has it easy, it can just take some of the gasses dissolved in the water and pump them into its bladder with enough pressure to stand the exterior pressure. Since gasses are way lighter than water, it does not need a very large bladder.

Now, you have your humbird (human bird) with his bladder. The first issue is that it must be HUGE. Since air only weights slightly over a kilogram per cubic meter, the most buoyancy you get will be that 1.225kg per cubic meter (at sea level, less as you rise), and that assumes that the bladder is void.

But let's forget about that and guess that you are happy with that "humzeppelin" design. Then appears the issue of how to fill that gigantic space.

You may try to justify that your animal has some internal deposits of, say, compressed helium inside (again, compressing helium is not small feat for a living being), but the issue is again where will you get your helium from (free helium is light, so it goes to the upper atmosphere and goes into space; our supply of helium comes as byproducts of nuclear decay that got trapped in oil deposits).

Another option would be the animal producing hydrogen by some chemical reaction, that is feasible but is a great risk for the animal (not only because what happened to the "Hindenburg" but also because hydrogen is highly reactive with organic tissues).

Getting lift is the only problem. People are innately able to get to the ground from any height without external assistance. The ratios are well known.

B) One things to consider is that the difference between a human's density and their surrounding medium is significantly different than the difference between a fish's density and its surrounding medium. This means a fish can make rather subtle adjustments to change its vertical position, but a human needs to inflate a balloon the size of a shipping container. Additionally, while fish can swim at any height in the water, humans can't walk once they're four inches off the ground. Floating humans will just blow in the wind.

This idea was explored in Neal Stephenson's book Anathem. Humans in this book had spheres which increased their volume without allowing air or any other gasses to enter them. That is, they filled with vacuum. Which is an even better "lifting gas" than helium or hydrogen (marginally). If you're not restricted to hard science, I suggest you explore the vacuum lifting spheres, then there is no need to mess with filtering rare gasses out of the atmosphere.

Modern technology has no problems creating a device that floats thanks to LTA gas or is assisted by it. Evolution has created systems in animals that are even beyond our current level of technology, even very complex constructs have been found. I.E. the chameleon which uses nano-crystals to archive it's color change, something that could be very beneficial for modern displays once it is fully understood. There is no reason to believe that even a complex system to fly using LTA gas is impossible.

Evolution does create things "randomly", but if it turns out to be a disadvantage for the species it literally dies out, if it is an advantage, it will strife, if it is neither it might continue to exist in one form or another. So if LTA gas is something that is an essential part of a species, it has to provide some benefit to this species. There might also be species that have a 'left-over' version of LTA gas flight, that does not put them at a disadvantage, but doesn't necessarily provide any noticeably benefit either. 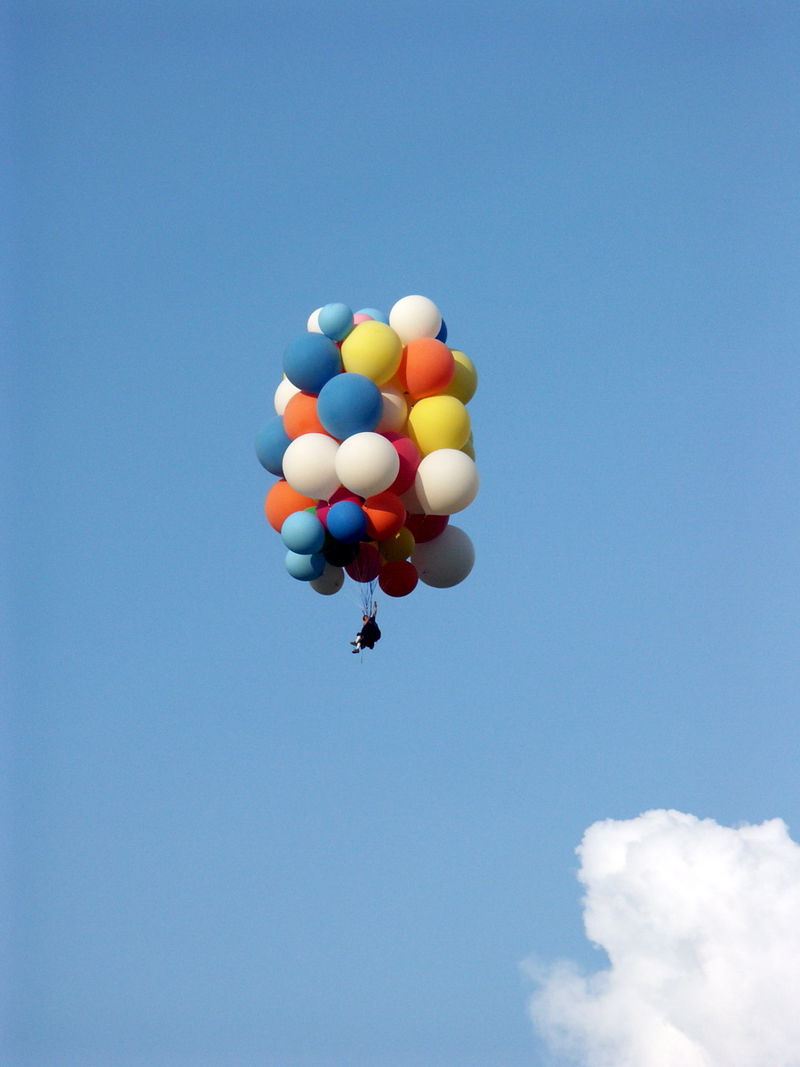 The amount of LTA gas required to cancel out gravity is enormous. Compare the size of the man in the picture to the volume of helium necessary to lift him up and consider that the amount of gas necessary to lift an even bigger species raised exponentially. Getting an animal the size of an elephant to fly with balloons would require so many, that the elephant would look tiny in comparison.

Any larger species that uses LTA gas as their main system of lift would have to look massively bloated. As friction raises with the surface area (drag), such a species would be either very slow, or it would have to have a body that would reduce friction. A flying squid would barely be able to fight the force caused by wind on his body, a flying Manta could however be very maneuverable. Water-based creatures serve as good examples here, as they have to fight the same issues at a smaller level.

Further issues caused by LTA gas like flammability, leaking, producing gas reserves are no relevant issue, because if such a species would exist, it would have already been solved in a clever manner, otherwise they would have died out at some point and it wouldn't exist. Gas sacks would be sufficiently covered by dense tissue to prevent leaks from predator attacks, and even rare gasses could be created by that species organism at a sufficient rate. There are bacteria that turn iron into gold, so why shouldn't there be an organism that somehow produces helium?

So why are there no LTA gas flying species around here?

The main reason would be that evolution favors simpler creatures, as they can adapt to environmental changes easier than complex creatures that require a very specific Eco-system to exist. Additionally mutations do not happen instantly to something completely random, but gradually, so there had to be a base creature with an air bladder that slowly evolved step by step into a flying creature with LTA gas, which may simply have never happened, or the creature died out on the way.

Huge flying creatures that would benefit from the lift of LTA gas bladders could have evolved, but such a species would require more food thanks to it's size, and therefore it would be more dependent on a vivid Eco-system to get that food. A simple drought could have killed such a species or it's ancestors before it became widely spread, similar to how dinosaurs died out from a sudden change to the Eco-system.

A species flying with the help or entirely based on LTA gas bladders is possible, but unlikely to evolve by natural cause on this planet, as it is complicated yet provides no substantial benefit over simpler alternatives. This could be entirely different in entirely different Eco-systems, or with magically accelerated evolution. So a creature flying thanks to gas bladders is entirely possible in a different world, but not necessary.

That's exactly what you're talking about - a hydrogen or helium balloon. Of course, it can't be nearly as compact as a fish's swim bladder because air is so much less dense than water. To get enough of a difference to lift a person, you need something the size of a balloon.

Not the answer you're looking for? Browse other questions tagged technology physics transportation .

14
Is there a reason a flying species can't use lighter than air gas to help provide lift?
4
Biological Flight With Lighter-Than-Air Gasses
72
Are flying plants possible?
5
Vacuum instead of light gas?
7
What is the sack-to-ship ratio?

9
Semiliquid atmosphere - Is my premise/conclusions correct; and will it get the result I want?
14
What would a steam locomotive look like if steam power became yet again the main type used in rail transportation?
1
Non-Enclosed Boat/Backless Boat?
5
Materials for an ancient hot air balloon
28
What would birds look like if they used buoyancy to fight gravity?
5
Feasibility of sourcing fuel from air
5
Which physical laws or attributes would have to be changed to increase the buoyancy of an airship?
3
How much sand is required to create a fluffy barrier?