Here is one of my ideas for when my Kepler Bb civilization gets higher level technology. It is Solar Powered Transportation.

Anyway, there is more sunlight on Kepler Bb than on Earth and more opportunity to gather that sunlight in the form of electricity for 2 reasons:

2) Every time unit except the second is lengthened but names are kept the same for simplification and to make it even simpler, I kept the ratios of daytime to nighttime for any given latitude the same as ours.

When the people on Kepler Bb get high enough on the technology ladder(I kind of view it as a ladder from ancient technology(simple bow and arrow, baskets, etc.) to modern and postmodern technology(calculator, solar power, hydraulic machines, etc.) with some overlap along a timeline(in the case of Kepler Bb, considerable overlap(communicators are developed long before lightbulbs and solar power grids)) 1 milestone towards modern and postmodern will be these solar powered vehicles.

"Gas engines pollute the air so much, so I don't want gas, even biogas is a no-no." This was the first step to getting my idea, taking pollution out of the equation.

"Electrolytic engines waste water, Even if a combustion unit is added to form water again, it will still have been wasted." This was the second step, not allowing the wasting of water.

"Solar power is perfect, No water wasting, no pollution, 100% electric, Yes!" This is the result. Solar powered vehicles and in fact, everything powered by renewable sources(hopefully 100% solar or 50/50 Solar and Wind(Not sure about Water power and Geothermal energy is already used as a natural heat source in the cold months))

So here are some images of what would result: 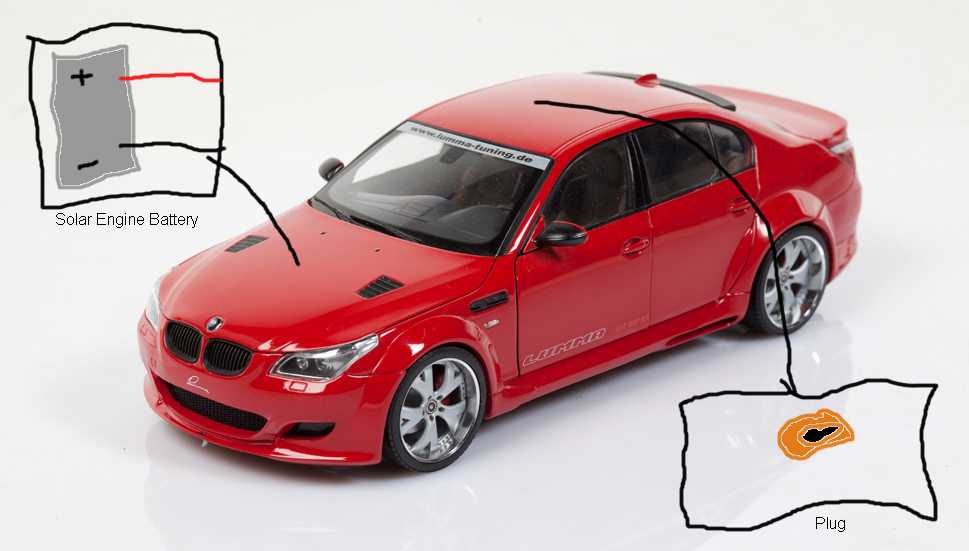 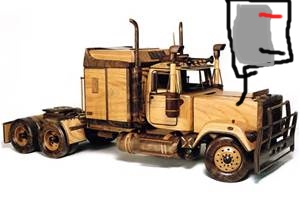 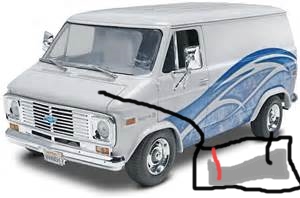 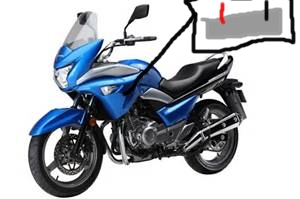 That is for the vehicles. Now as for recharging, it can happen(and most likely will happen) at home. The battery gauge would look somewhat like this: 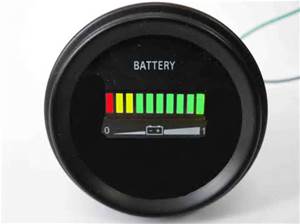 This is a picture of a rechargeable battery gauge. It is basically a voltmeter in constant use. The lower the voltage, the shorter the amount of time before the battery goes dead and needs recharged ASAP. Of course it isn't just use that can lower the voltage but in a battery, that is the most common cause.

I was thinking for recharging there should be Solar Charging Stations in cities and rest areas between cities.

So what do you think of this solar power idea? Anything I can change to make it better but still solar with no pollution or wasted water?

And what if the solar battery is dead and the humanoid driving the vehicle isn't anywhere near a solar charging station? For motorcycles it isn't much of a problem because they are light enough vehicles for the humanoid to carry, even a long distance without injury. But a truck driver probably couldn't even push the truck forward with all his/her strength so he/she would literally be stuck on the road. There has to be a backup system for these drivers so that they don't get stuck on the road because of their battery but what backup system?

To be honest, I'm not really sure what the question is here!

With enough investment in infrastructure (and maybe some improvements in technology) this system would work on Earth. We already have

So it would be fairly feasible even if you didn't have 4 x the sunlight.

As for a backup, the obvious answer here is a solar panel on the car (which will of course only work during the day). Indeed, it'd work as a booster too and - if it charged when the vehicle wasn't running during the day - may well completely remove the need for charging stations at all.

The biggest issue with your scenario that I can see is the effect of 4 x sunlight on everything else - not least humans. I can't find any figures for sunlight intensity distribution on Earth, but I'd take a rough guess that most of your planet would be uninhabitable to humans without technological intervention.

EDIT: Going by the inverse-square law, a planet with four times the sunlight would be receiving the equivalent sunlight as if the Earth were twice as close to the Sun as it is now - ie orbiting somewhere between Mercury and Venus. I'm not convinced that the planet would actually be inhabitable at all.

While the question as worded is a bit vague, any vehicle which needs to be driven directly from solar energy will either be extremely small and light, or have unreasonably large solar panels. (Modern vehicles decouple the energy from the vehicle, and store it in a battery pack, but due to the low energy density of current and projected batteries, you end up using a ton of batteries to go only 40 miles, whereas the same vehicle [Chevy "Volt"] gets a 300 mile range from 8 gallons of gasoline). 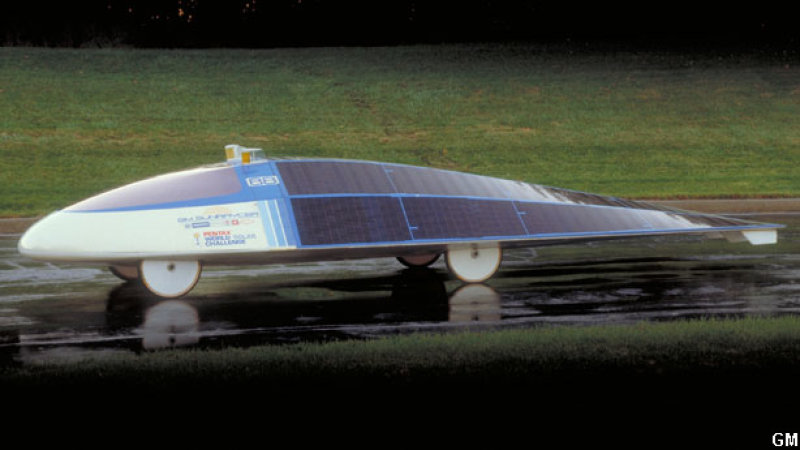 This vehicle took one driver across Australia in 44 hrs, spread over 4 days during the daylight hours. Matt Bowyer's comment puts it in perspective, with @ 10m^2 of collecting area, the vehicle received >10Kw, enough to propel a small vehicle with essentially racing bicycle wheels and carrying only one person.

So while using solar charging stations to collect electrical energy to charge batteries is possible, using on board solar panels to power anything larger than a very small and light vehicle is impractical at best.

You can calculate the energy required to move mass (your car plus occupants) and that will tell you the amount of solar energy that needs to hit your solar panel. Of course even if you assume 100% solar energy conversion and 100% frictionless movement, you will find that there is no way to power a vehicle directly by solar power. The best you can hope for is solar CHARGING, which would require a lot of charge time for a short operating time.

But having the car directly being charged while you drive it, ain't gonna happen, even if you coat it with solar paint, at least not in an earth-like environment.

You cannot power a solar vehicle with solar power alone; you need a battery. Unless it's a concept, really light vehicle and you drive it on very flat surfaces.

A car with around four square meters of exploitable projected surface, double the sunlight, double the panel efficiency, ends up with no more than 3.2 kW of power from the Sun (on Earth we can get 200 W/sq m, so you can aim for 800).

An electric car will require about 1kWh per 4-20 km, depending on the speed and performances. The Tesla S has 300 miles highway-speed range on 80 kWh, so that's around 6 km per kWh.

This at highway speeds; but if you go slower, you consume less, and a fully solar Tesla S on your planet could make perhaps 50/60 km/h, weather permitting, without the battery discharging (if you limit yourself to these speeds you can also use a much smaller and lighter battery, increasing performances and top speed. Of course then you can't travel by night or with cloudy skies).

The faster you go, the longer you must stop under the sun to recharge, and the larger battery you need.

Of course you can have solar sheds at regular intervals along the roads, with swappable charged batteries inside.

Honestly, I think you need to reword your question. Your not using solar powered cars, your using electric cars that are charged using power network that is run on solar.

If you wanted just a solar power car, that wouldn't make any sense, because it would need to be extremely light weight and be covered in solar panels. It would also fail to operate on rainy days (after your battery is drained), in cloudy weather, in the dark or at night, and be terrible frail since it has to be so light weight and streamline.

Any sort of heavy vehicle running on a single battery, which is recharged by solar will barely be able to move. Your getting roughly 1KW/H per Square meter from solar, so assuming you could get 4x that power and convert it efficiently, your only getting 4KW/H when you would need roughly 50KW/H (this is a super rough estimate, I saw in a google link description).

What you've done in your question is literally describe a world with only electric cars, with a solar powered grid. For your designs I would suggesting looking at current electric cars, bikes, trucks and so on. With high enough technology and investment, we would also be able to do that here on earth.

As for the dead battery problem, electric cars usually use a lot more than 1 battery to supply their power. So a single dead battery won't affect the running of your car, but will limit your maximum speed/load.

There is nothing wrong with electric cars run off solar power... but they aren't the same as a solar powered vehicle which has the solar panels on it and runs directly off those solar panels with the small battery to supplement the power.

Unless you are talking about cars that are directly powered by light (like from a panel on top of a car), the problem you have is not the collection of energy, but the storage. The lack of good enough energy storage is the reason we don't have electric cars today. If you have that, you are set. Couple it with some more advanced solar power generating tech, throw in maybe hydroelectric power for the main grid, and you have electric car - utopia.

Not the answer you're looking for? Browse other questions tagged power-sources vehicles or ask your own question.

14
What are the power options for intelligent humanoid robots?
16
Imagining a Solar-Powered Economy
2
Underground City Design: All Solar Electricity
13
How do you power a cyborg?
2
Feasibility of electrically heated steam engine
28
How can spacecraft manufactured on the moon be powered?
22
Rain powered transport
5
Post-Apocalypse EV Effectiveness
3
What is a plausible combustible fuel on a colony planet?
3
Would redox flow batteries be good for the development of all-electric armored vehicles?