Entropy of the afterlife

My world is based on the concept of afterlife, with a twist: people who died in other worlds are resurrecting in mine. Once in the afterlife world if they suffer another lethal injury or condition then they resurrect within the very same world, being unable to escape.

However, I try to stick to the standard laws and rules of physics for this world, as if it was happening to our very own universe.

I was not dealing with the entropy side of this concept, but now, after watching some great videos of MinutePhysics in the matter, I became interested.

So the question: if people start to be formed sporadically and randomly across the universe, with a possible conservation of matter and energy (=afterlife people are "spawned" by the transformation of inorganic material), then how does it affect the entropy level of the Universe?

Their body act upon as an energy transformer, so at one side, they speed up entropy increase - but on the other side, their bodies are much more ordered, decreasing entropy.

What is the case?

The question of what happens when we die is an important question in most of our lives, so it doesn't have very many easy answers. Even if we just focus on the laws of thermodynamics regarding life after death, the discussion is more complicated than we might think it should be. So let's get to science and start breaking this one down!

The issue comes from the definition of entropy within thermodynamics. It's a tricky word, on its own, with many meanings, but one of those meanings is particularly calculable. For this definition to work, we have to split up the potential universe into "microstates." These are states which are the smallest building blocks of the system we care to observe. Consider a system consisting of two boxes side by side with an opening between them. The opening has a door so we can choose to isolate the boxes whenever we want. Inside that box are a few particles. This should sound familiar to anyone who has explored entropy before: it's the basic setup for Maxwell's Daemon. We'll use it for a moment to make sure everyone is on the same page before plunging down the rabbit hole. 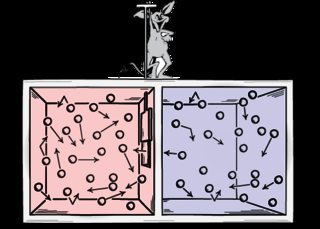 Now we can define this system to have many states. We can treat each different position each particle can be in, and every combination thereof as a state. However, that's not too helpful for any practical purposes. In Maxwell's Daemon, we really can only rely on the energy of each particle, and which box it is in. These define our "microstates." They are the states which we are willing to consider when we try to define entropy, and they contrast with macroscopic states in that we may never actually observe a specific microstate, but rather we treat them probabilistically. We discuss the probability that any one microstate occurs. We can then use an equation to calculate entropy:

Now we can go down this line of reasoning quite far, but this is a good time to point out the limitations of this approach. What if we can't define the probability of a given micro state meaningfully? What if there are uncountably infinite micro states? Surely these things do not happen, right?

In many cases, we can use what is called a "local equilibrium thermodynamics." In there cases, we accept that the overall system is not at equilibrium, but small pieces of it are. In most cases, this is an effective model, but there are some systems which do not simplify this way. Chaotic systems, for example, are notorious for causing small measurement errors to blow up into gigantic ones, so such approximations are not always useful.

Life, in particular, is notoriously difficult to model well using local equilibrium thermodynamics. This means entropy is actually a really tricky little topic when it comes to the afterlife. Of course, much of the body is well modeled using local equilibrium assumptions, but is our body really the "living" piece that one talks about when talking about an afterlife? Usually one talks about a soul or some other ephemerally transient yet tremendously durable concept when talking of the afterlife.

Many reasonable scientists will scoff and say "there are no perpetual motion devices," but those scientists will also have a great difficult in proving that they cannot possibly exist unless they first assume equilibrium thermodynamics. Granted that's a far cry from proving that you are a perpetual motion device, an eternal soul, but at least the unknown should leave some interesting potentials to explore.

So that's the science lesson. Moving souls from one world to the other wont violate the laws of thermodynamics because the law being considered only governs equilibrium states. However, you also create bodies for these souls to inhabit. That will call for energy. Where does it come from? That's up to you. Maybe it sucks it from the old universe. Maybe it uses the energy from the local sun to do it. Maybe it's plain ol' magic. That's up to you. However, if you want to talk about quantities, I've got you covered. Most of the energy pent up in the human body is well described by local equilibrium thermodynamics, so we can measure it. In fact, conveniently, if you use locally sourced materials (atoms), the energy content of the human body is mostly that of its chemical energy.

This makes it easy to figure out how much energy we're talking about with each new soul moving on to the afterlife. We just set all the people on fire and watch them burn.

Did someone cackle manically? Surely it wasn't me! No, never!

In all seriousness, the chemical energy released via burning is a pretty darn good metric for the total energy you'd use to make a human shell for your souls. Thanks to the internet, I don't have any excuse to do the experiment myself, because someone's back of the envelope calculation is good enough for us: about 750MJ.

Modern estimates suggest there have been about 107 trillion people that have ever graced the face of the Earth. Multiply these together, and you get about $8\cdot 10^{22}J$. Turning to one of my favorite pages on Wikipedia, Orders of Magnitude (energy) we can get ourselves a reference point for this quantity of energy:

So recreating all of the bodies of every human who has ever existed would take about the amount of energy that reaches the Earth every 5 days, give or take.

So yes, you will violate entropy by creating all of those bodies. But in the grand scheme of things, the fact that you proved the existence of an afterlife is going to have more impact than a handful of Joules stolen here and there.

If they form on face of a planet by quick recombination of basic elements into molecules, then you increase entropy. This is a violation of second law of thermodynamics.

But this is not happening on its own - there is some magic involved - so this process probably decreases entropy in the magic field - and as in other process by higher amount.

To your note about person working as entropy increasing machine - there are no real laws/observation about long-term entropy behaviour - it just increases from moment to moment. And in theory such created person can increase the entropy in long run after quick entropy increase, but that is not guaranteed:

You are transferring entropy from one system to another. The universe where they "die" gains entropy as it loses the person who has died. The "afterlife" universe loses the same amount of entropy.

It is unlikely the process is 100% efficient so there would also be some waste as extra energy is generated in the process.

Essentially your afterlife is working like a supernatural refrigerator, heating the afterlife by creating more souls in it and cooling the outside world by sucking the heat out and into itself. In doing so inefficiencies mean that the total entropy in the whole system is likely to increase though. In other words the pre-death world will cool down more than the post-death one heats up.

In effect the afterlife is "feeding" on everywhere that the people are coming from, which may even explain how this came about.

Dying within the same world and then resurrecting is actually harder to explain, but essentially it means you need to sacrifice entropy somewhere else to pay for the resurrection. Note though that from a purely physics point of view a person with a knife through their heart has no more or less entropy than that same person just before the dagger plunged home.

Not the answer you're looking for? Browse other questions tagged science-based physics energy universe or ask your own question.