I don't trust anyone when I conduct my special line of business. I do my thing, face-to-face, verbally. I hand over a sealed envelope of cash and I'm done.

This can be powered by a publically available power ducts.

This is future-based, so we're not restricted to modern-day 220/240 volts.

There's a lot of question about the size and purpose of this device. If by "portable" you're envisioning something that will give you privacy in, say, an airport... no.

By using it you give yourself away.

Fundamentally the two requirements are in opposition. Actively suppressing surveillance and electronics is a privacy Catch 22. Using it reveals your presence.

There's the movie cliche of the hero shooting out the security camera. This is like that... except the guards aren't dumb. As soon as the camera goes blank they'll investigate. But it's far worse.

You turn on your device and what happens? The lights turn off around you. Security cameras pointed in your direction mysteriously go blank. The coffee machine stops working. Microphones and cameras, even in personal cell phones, stop working. This is going to draw a lot of attention from people nearby. Security and maintenance will notice the disruption and someone will come investigating.

For the real world version of this, watch How Governments Have Tried To Block Tor. Tor is a way to get private communications over any network. But using it suggests you have something to hide, so you'll have increased scrutiny. The government can even make its use a crime. So Tor has done its best to be indistinguishable from normal encrypted web traffic. The cat & mouse game between Tor and governments trying to detect Tor is the subject of that video. It will be enlightening how far this goes.

By using it you're committing computer crime.

You're probably committing multiple computer crimes by interfering in so many electronic devices you do not own. People in prison don't get a lot of privacy.

It can be defeated with a film camera.

A $5 disposable film camera can defeat your device. It has no electronics. It's purely mechanical and chemical. Maybe the flash won't work.

It can be defeated by eyeballs.

A couple agents watching you, or even just people nearby, will foil your device.

"I looked over when the lights suddenly went out around one table. I saw Mrs. Doe hand an envelope to Mr. Criminal and receive a package in return. Then two guys in suits walked up and arrested them."

If you can do that, why not just take over the world?

Your magical device needs to suppress observation from the outside. That means the cameras and microphones on everyone's cell phones, the security cameras across the street, the body cameras on police, and even the directional microphone pointed at you from a block away in the FBI van investigating your fishy activities.

If you use a blunt device such as an EMP, you're gonna be noticed. You'll need to know what observation devices are directed at you, intentionally or not, and target them all individually. Maybe you can knock out the cameras with carefully directed lasers, but you have to know they're there first and track them with precision. Microphones are going to be much harder to direct noise cancelling at.

Again, this doesn't seem practical and it's going to get you noticed.

If you can somehow "hack in" and edit yourself and your partner out of the image or audio... why are you messing around with this as a privacy device? You can control any electronic device around you! Take over the world!

Such a device harasses the people around you.

You'll pay any price for your privacy... including interfering with the lives of everyone around you by disrupting all their electronics and electricity. And if they have a pacemaker? Self-driving car suddenly goes dead? Traffic systems go dead? Oops.

Sure, you can do it, but it's morally bankrupt.

No fancy tech necessary, just meet somewhere away from technology and people. Pick an isolated spot in a large national forest and meet there. If someone follows you you'll easily spot them because nobody should be out there; call off the meeting.

A small, quiet surveillance drone makes this more difficult, but that assumes you're already being actively tracked.

@Vaesper and I had a chat about it and worked up a "practical" solution.

Use a van or small truck. Fit it with audio insulation and a Faraday cage to stop outside audio and electronic observation.

There are two doors, one for you and one for them. Their door has a strong electromagnet in the frame to wipe out and fry any magnetic storage. It also has a body scanner like in an airport. They're also searched by hand to make sure they don't have anything EMP hardened or hiding in its own Faraday cage. EMP hardened devices are larger than normal and easier to spot.

If you want to get extra paranoid, and they don't have to see your face, instead of one room there's two rooms separated by a solid wall so they can't see you. You can, of course, see them via a camera. In the wall is a speaking tube like on a ship to talk through. For passing items there's a drawer like a bank teller has.

While this is "practical" from a technological sense, such restrictions and paranoia will probably insult and drive off anyone wanting to do business with you.

Simplest solution might be a couple of face masks wired each wired to an earpiece. Make the face masks cover enough of your face so that you can't be lipread; add noise cancelling/ random noise generation / multi skinned mask (so the outer face is separate from the inner, so no reconstructing audio by bouncing a laser off the inner face), so what you say can't be heard from outside the mask. Do the same thing for the back of the earpiece. Now you should be pretty safe from anything electronic - no room for anything in the other person's ear, and the only way you could record anything you were saying is to put a recorder in the speakers mouth - which only gets you a record of what the speaker was saying...

Much simpler to avoid recording by making sure there's no space for a recorder than trying to stop one working.

If you're worried about X rays peering through the mask or watching tongue movements, just add suitable shielding around your head.

If you don't want to be observed... tricky. Or use them inside an opaque tent - but that doesn't stop someone observing you and mr X going into or leaving the tent, so there isn't really a solution for that...

I think the Portable Cone of Silence from the TV show "Get Smart" might suffice, if you were to make it opaque rather than clear. Obviously, you would need to add some kind of EMP device to disable recording etc. 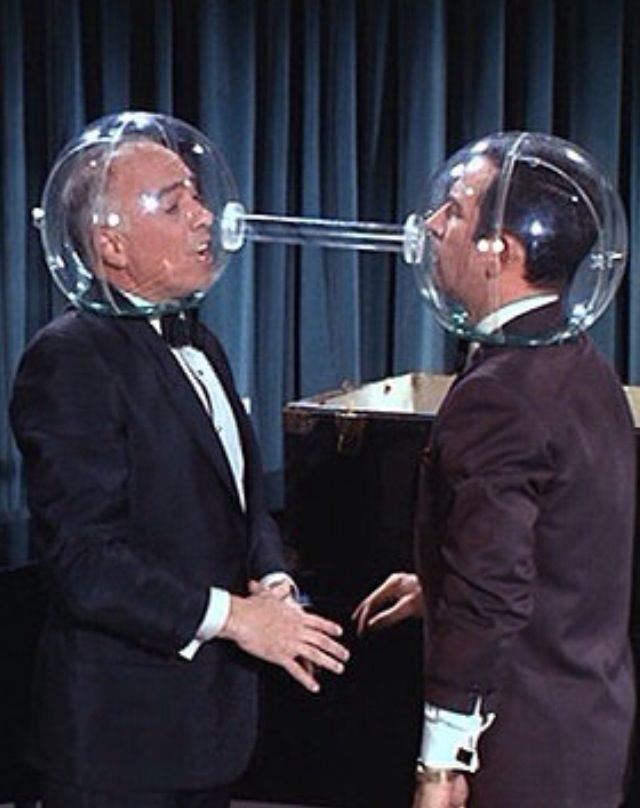 It looks like you're looking at the following requirements:

No electrical equipment inside

Fry them with a strong EMP pulse. From what I have been able to scrounge up on google, it seems like the human body is far less sensitive to EMP than any electronic systems might be. There might be future tech with superior anti-EMP shielding or genetically engineered "life 2.0" kind of tech that works as a recording device though, so this solution depends on your tech level being low enough for it to work.

Additional idea from my chat with @Schwern:

Build an x-ray scanner into the room. Any potential bugs could be spotted without making the faux-pas of boring your business interest with manual searches.

This boils down to preventing any possible signals from leaving the device. Complete decoupling of any internal systems from the outside power grid (at least while the device is in use), as you don't want any possible leakage of information through the power line.

If there is anything I have missed, let me know. The main thing that I am unsure about is how portable you need this to be. If it's installed in the back of a van/spaceship, is that portable enough?

With sufficiently advanced technology, without being too absolutely futuristic, the answer has to be metamaterials. You and your client step inside a "shroud" made of several layers of different metamaterials.

The deflection and distortion of light doesn't to happen on all frequencies of light just more than enough to thoroughly obscure what goes on inside.

The second metamaterial layer works acoustically by bending sound waves so they are confined to the shroud and directed into an acoustic damping trap where all sound is cancelled out.

The third layer of the shroud doesn't need to be made of metamaterials. This is a bog standard Faraday cage to prevent any electromagnetic signals entering or leaving the shroud.

To prevent recording devices the shroud will need to incorporate high-sensitivity EM sensors to detect any such devices. Upon their detection an internal electromagnetic pulse is generated to "fry' any such devices. The sensors will automatically shutdown to avoid being fried too.

Old-fashioned recording devices like the Minox camera won't be detected because any electronic or electrical activity. Mechanical and photochemical recording devices don't have any such activity. The shroud will be equipped by sufficient scanning technology to detect concealed devices of this kind.

The metamaterials used in this answer aren't currently available in shops, stores or supermarkets nor can they be purchased online. This answer does assume ongoing progress with the development of metamaterials both for light and sound. The sensors and scanning technology involved are straight forward extrapolations of existing systems. With the ongoing miniaturization of technology and some well-designed folding systems the whole "shroud of silence" could be carried in a standard brief case. With one press of a button the whole thing can be open and enshroud two persons.

There is technology that exist that can do what you want.

Muzo - a portable device that creates a "bubble" around the vicinity in which the people within it can only hear what is being conversed.

11
Real deflector shield
5
Realistic Captain America Shield
15
How to shield my spaceship against all that deadly radiation?
4
How does privacy work if govt can access every camera throughout the city?
0
Killing a magnetic shield
20
How to create a seawall with medieval technology?
7
How can I create long fall boots?
2
How to create a volcano?
4
Venting Fusion reactor plasma to create a plasma shield?