Cameras replacing human eyes after an accident: Is there a limit to how high resolution the brain can process?

Let's say my eyes were ripped out in some horrible accident, and were replaced with cameras. Over the years, the cameras get better and better... 4k... 8k... 16k... etc. Is there a limit to how high of a resolution our brains are able to process?

Yes, there is a limit.

The camera would have to use the same communication protocol that the natural retina uses to feed into the optic nerve.

The optic nerve isn’t just a wire like a USB cable. 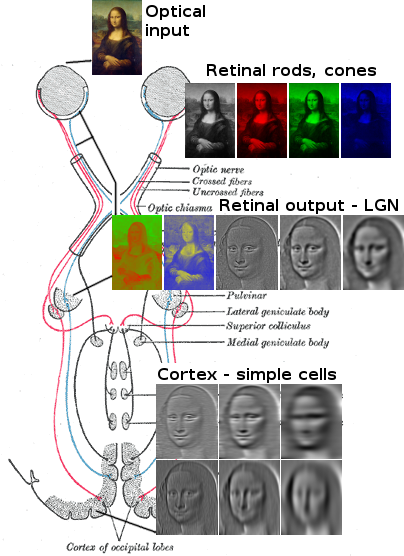 Rather, it is a processing pipeline. It is actually part of the brain, just arranged in a long strip so that the work that needs doing is performed in the physical space that needs to be filled.

We receive not pixels but more like a vector description with perception tags.

But maybe we can use higher resolution anyway?

What if you replaced the optic nerve and as much of the visual processing cortex as was needed, too?

The result of the whole process might be, for example, to “see” (meaning to perceive after analysis) that there are two edges next to each other. The original retina could not resolve that there were two different edges so the analysis only finds one thick line.

But the high-resolution prosthetic eye, with updated analysis circuits to match, resolves two close-spaced features and dumps that information (“there are two closely spaced parallel lines at such-an-angle relative to other features”) to the visual cortex.

But maybe science isn’t ready to replace these brain structures. The different (better) retina replacement can have its own processing internally, which then is used to generate fake data compatible with the optic nerve input. Maybe you'll “see” the two lines pre-enhanced or the separation exaggerated; with a general smart zoom feature working to fill your visual input with what’s interesting.

The high-res sensor could zoom by taking a subset of the spatial extent rather than subsampling all of it. It could provide a movable fovea; the brain can't handle more data, but you could select which area is the region of interest.

Also, note that the retina has cones and rods randomly arranged, not lined up in a neat 2D grid! This is important because it reduces aliasing. If the machines are neat grids, you might need higher resolution to achieve the same effect. To provide compatibility, the processing in the eye would clump real pixels to emulate randomly-positioned (larger) pixels. And, it could be auto-adaptive to even better prevent artifacts and improve perception of real details.

We simply don't "see" in the same way that cameras do. What we actually see in any instant is a very small amount. Our brains do an incredible job of filling in the gaps of our instantaneous perception and giving us a vision of the whole.

This is why we're so prone to optical illusions and explains why they highlight how our perception works.

Cameras vs the Human Eye

We are able to: * Have an almost infinite depth of field * Instantaneously "see" a scene with a huge range of tonality (say you're in a dark church looking out of the door into blazing sunshine) * Have a huge range of sensitivity - we're able to sit in an almost dark room and still see enough not to walk into tables.

If we were to replace our eyes with high definition cameras, our brains would probably not be able to process the added information. We'd have to completely relearn how to see.

Bandwidth limits abound. The human optic nerve is estimated to be capable of carrying about 8.75Mb/s, give or take. Our "flicker rate" of about 30fps would give us about 291kb/f for each image. Using 8 bits per channel, that means we have 36500 pixels to work with. That's a far cry from the millions of pixels in a modern camera.

The human brain and optical channels are brilliantly designed to maximize value out of the whole system. They're not designed for raw data input, they're designed for finesse.

We could replace the optic nerve with wires to get more bandwidth. Obviously the brain has more bandwidth to play with than the optic nerve does. However, it's not clear if we could really leverage it. We already spend 20% of our total metabolism on our brain. Doing calculations costs energy. While the calculations on a full camera image are simpler than they are on our organic images, they'd still rapidly swamp the brain. They're not the kind of decisions the brain is good at.

Interestingly this energy cost is so pronounced that we actually divide our retinal gangelons into two classes. A small fraction are designed to catch rapid motion, and are updated at a high rate, while the majority are "sluggish," designed to update slowly and catch the whole scene.

From Wikipedia we learn that the visual field for one eye is (from the centerpoint) about 60° up, 60° towards the nose, 75° down, and 110° away to the side and for two eyes it is 135° vertical and 200° horizontal. We also learn that 1 arc minute is a reasonable resolution, for the purposes of calculation, why not make that 0.1. I'll leave it to you do do the math(Ed note: about 97 MPixel, close to eye physical limits ).

Of course, this ignores response rate, the ability of the lens to focus at different distances, the ability of the iris to increase the amount of (intensity of) the light hitting the retina, the sensitivity of the retina and the color differentiation of the cones & rods. I've forgotten the number, but it was about 3 or 4. The brain SENDS 3 or 4 times as much data TO the eye as the eye sends back to the brain.

In other words, vision is a very computationally dense process. I've seen two things in my lifetime which have amazed me and which are relevant here, I think. I knew a guy who could read a traffic speed limit sign at a distance where the sign (rectangular white) was little more than a dot to me. He had incredible resolution. I knew another guy, (I've noted it in several) who could (and did) "take in" an entire scene in a single glance. Meaning, for instance, he and I would be walking by a room where a meeting was going on, and we'd both glance in. I'd recognize a couple of people and a few other details while he could tell me who was there and what exactly the powerpoint slide of an excel worksheet being shown had on it. (not everything, but an amazing amount of details). In the first case, the resolution is physical (most likely); in the second case he had to have both excellent eyes, and a neural system which was able to process all of that information a lot more efficiently than I can.

The take-away from all of this is that there are all sorts of limits on human vision. Some of this is due to the physics of the eye, some of it is due to the processing in the optic nerve, and some of it is, no doubt due to the efficiency of (effectiveness of) the visual volume/area of the brain. One thing to keep in mind is that the processing power of the brain is limited. The more information you extract from one "instant" of stimuli, the fewer "instants" you'll be able to process (everything else being equal). This implies the perfect system would be one which only focuses on the stuff you want to retain. The downside of this is that while focusing on the strawberries, you miss the leopard in the tree.

Not the answer you're looking for? Browse other questions tagged science-based reality-check humans or ask your own question.

34
How would prolonged use of augmented-reality combat gear affect soldiers?
3
Recording Human Vision

68
What would be left of a civilization founded in dinosaur times?
7
Humans with 360 Degree Vision across IR, Visible, UV and XRay?
6
How do I create a societal collapse with ruins, while the tech can make Ridiculously Human Military Androids?
2
Can you have brain uploading without having solved the binding problem?
4
How can high-level awareness resulting in telepathic radar be made possible in the human mind?
3
What would the experience be like for a human transported to 4 dimensions?
1
How can I speed up the evolutionary process in humans?
5
Can a Robotic Eyeball Be Created that Perfectly Replicates Human Vision?
4
How can I cool the body of a human such that it can see Long wavelength IR light without its eyes glowing