Anatomy of a living, tree-based spaceship - What's it made from?

I've always liked living spaceships, but it seems to me that the animal kingdom would make far inferior spaceships to the plant kingdom. With that in mind, what does this tree-ship have to be made from to:

Ignore everything else about trees in space (nutrients, air, etc.).

I'm only interested in the chemical makeup of the tree that will let it and its passengers survive things like extreme radiation and (in the case of the passengers) vacuum.

If it helps when thinking about it, these trees evolved on a normal Earth-like planet, and were bioengineered to survive in space.

The vacuum of space probably isn't a problem. A layer of bark with tightly bound dead cells with thick cell walls would resist vacuum well, assuming it could be grown in a relatively uniform exterior layer. It would also be an excellent insulator, which would be a problem, the plant would need some method of shedding heat via radiators. There would be a need for some flex as there would be differential heating on the side exposed to sunlight. As you can read here most bark is designed to regulate tree temp within an atmosphere, using air pockets, shadowy ridges, etc to circulate or trap air as necessary. But if the bark on the space plant is uniform in thickness and relatively smooth it ought to allow for vacuum protection and temperature insulation.

Radiation protection would be another matter. The water content of the inner bark, plus perhaps heavy metals within the cellular structure, would be a good option to block solar radiation. Wood itself doesn't really block radiation, but with a high moisture content, thick enough walls, and perhaps water reservoirs in the wooden hull, it would suffice. You would need several FEET of water depth all around your hull to block a significant percentage of incoming gamma rays (here is a nice technical article about it. Or you could construct a metallic inner hull for the human areas. Of course the tree itself would suffer radiation damage, unless it were grown and then killed, leaving just the wooden frame for the spaceship (which seems to negate the value of a living ship for self repair/additional growth, unless you just didn't have access to other construction materials). What you would need is a protected inner tree that continually regrows the inner and outer bark, which are the areas getting all the radiation damage. Kind of like skin, so long as the bottom cell layer is intact, the outer layers of skin can regenerate and heal quickly. There is a possibility of creating a magnetic shield for the ship, which would eliminate the need for a thick water logged hull, but that would also require a substantial non-organic component to the ship.

There would have to be non-organic parts of the hull for sensors, access, and attachment points for whatever engine you are using. I doubt a tree could withstand much acceleration and the mass for strength ratio would be very unfavorable (especially with all that water) but if you had magic engine thrust tech, it may not matter.

Otherwise a tree would be fine for a ship. Having interior passages and spaces with breathable air wouldn't be an issue, though obviously the living space/tree ratio would be low, much lower than in a conventional ship. But if the tree could handle life support and computational tasks, perhaps even sensory and drive management tasks, you could eliminate a lot of the space needed for equipment in a regular space craft. There could even be a symbiotic relationship with the humans onboard, the tree needs their CO2 and waste, they need the O2 and glucose. Not sure how well photosynthesis would function in a vacuum (regular leaves probably couldn't retain moisture) but that's out of the scope of your question.

Polymath Freeman Dyson came up with this idea as a means of colonizing comets with a minimum of machinery and investment. The tree roots itself in the comet and draws water and nutrients from the comet's core, and encloses the space around the comet in a shell of leaves and branches which are optimized to live in vacuum and collect the relatively weak sunlight available in the outer solar system. Due to the microgravity environment, there is really little limit to how large the tree could become. 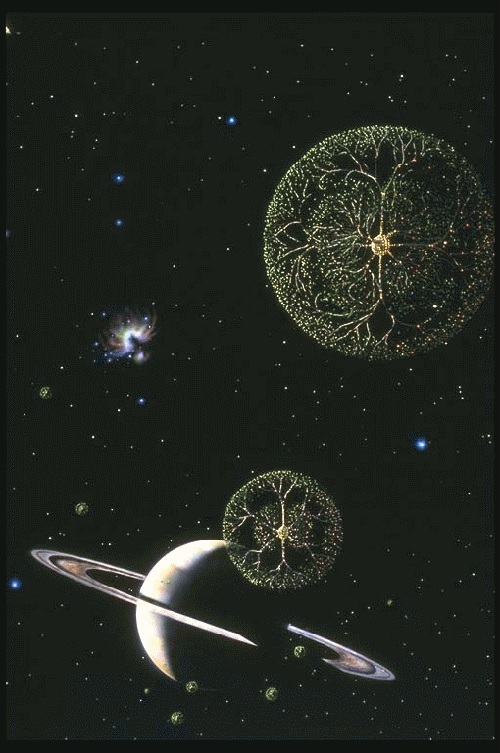 Humans and indeed an entire biosphere can live sheltered inside the tree trunks. If the foliage is dense enough and the genetic engineers have done their jobs, the leaves might form an impenetrable shell to keep an atmosphere inside between the canopy and the surface of the comet as well.

This would make for a small colony capable of housing a few hundred humans and their associated biosphere. The wastes of the humans and any animals would fertilize the trees, and the trees in turn provide a breathable atmosphere, fruits and even (if carefully harvested) wood for building.

Dyson tree colonies would most likely remain in orbits around the sun, since venting any of the cometary ices for thrust would be releasing critical supplies that keep the tree (and by extension, the people) alive. Under some circumstances, the leaves might be able to serve as a solar sail to provide some, very slow, movement across the solar system, but reflective leaves will not be available to harvest the sun's energy to support the tree's life processes, so the area of the canopy used to manoeuvre the tree would have to be carefully regulated. 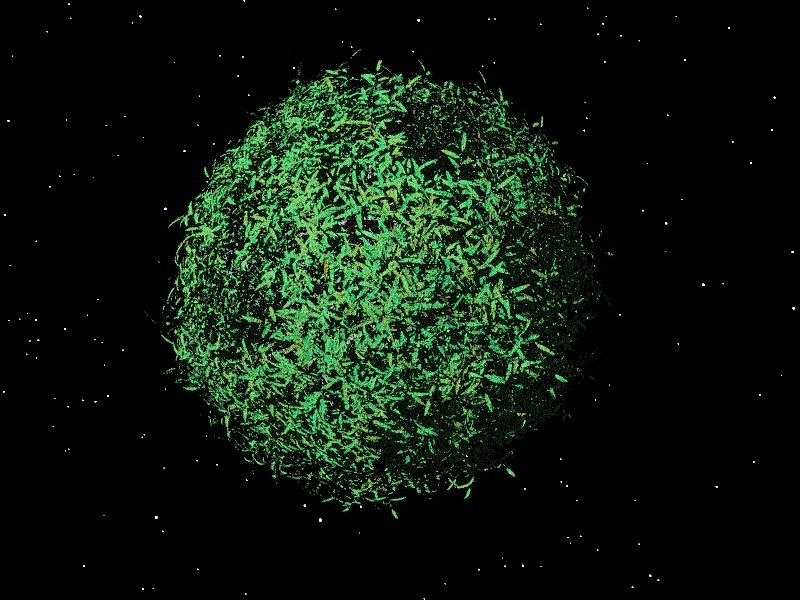 Dyson Tree. The vast canopy is needed to gather the very dim sunlight in the outer system, and too much of the surface devoted to reflective leaves might cause the tree to die

Living in such a colony would be akin to living inside a tropical or temperate rainforest, since everything between the canopy and the "ground" would be trunks and branches of the tree itself. Colonists would have to be well versed in arboriculture, in order to assure the health of the Dyson trees making up their world, and trade would be heavily tilted for the import of trace nutrients which are vital to the life cycle of the trees themselves.

Not necessarily maple, or oak, or whatever, but one that is much more dense and able to withstand significant pressure and impacts (like this one on Earth, but stronger... that should be a good starting point to find chemical makeup and whatnot). The bark should also be quite strong, and should be less fragile than the trees we have on Earth.

Under the assumption that this kind of tree would be able to withstand pressure and impacts, it would need a very high tolerance for radiation, or be able to very quickly heal itself from radiation damage (or, even better, feed off of it... some species of bacterium already do that on Earth, so translate it to a plant ability).

To survive vacuum, it would (obviously) need to be air-tight. The problem with that arises in the form of "how do passengers get in and out of the spaceship?" If you had some kind of rigid-yet-malleable and very durable leaf-like growth from the tree that can be used as doors, that'd be best. Plants even have small openings they use to breathe that you could consider the doorways.

There's one more important factor that is often overlooked: energy flow. To sustain life, you pump energy through the system, with energy exiting the system in less useful way.

Take a look at this picture: 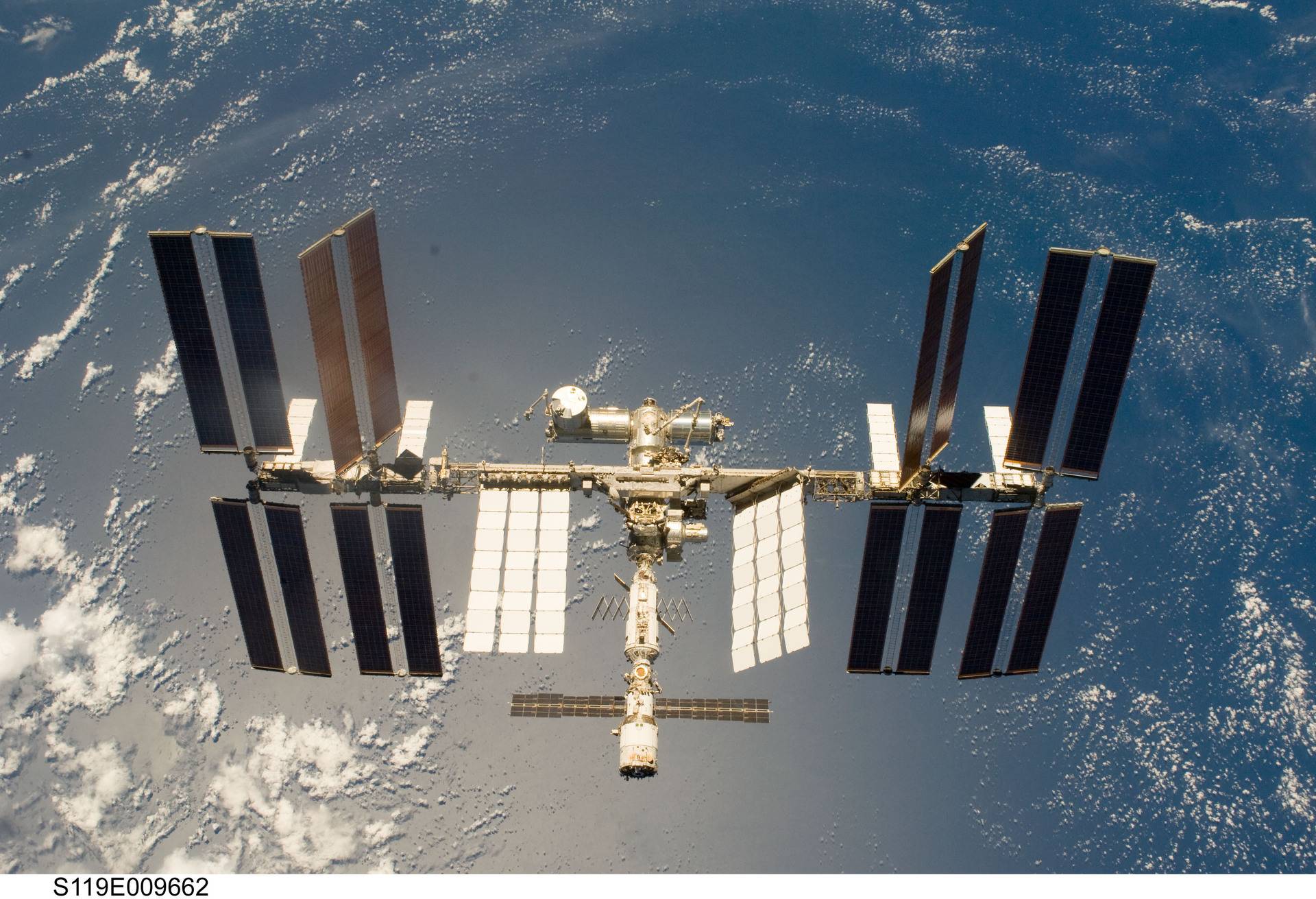 You can see solar panels, but there's actually more than that. Solar panels are ones that are sunlit - well, that's how they work.

Dark panels placed to be not sunlit ever are radiators. They're as important to the ship as solar panels.

If you simply place something in vacuum to harvest sunlight, it will get hotter and hotter - until it glows hot enough to lose as much heat as comes in (which, depending on distance to nearest sun, may vary wildly).

Even if you don't harvest sunlight and only use energy you got stored in some way - guess where all those Watts go if you do, like, anything? They heat the ship up. Your ship must have means to lose excessive heat or everyone will be killed by heat as a byproduct of life support systems running - or simply by heat of their own bodies.

If you have a ballpark estimate of energy flow through your system, this little formula will allow you to see how big/hot radiators you would need.

Of course, you are not limited to radiators only. If you have a matter to spare, your ship could sweat with it - that would double as propellant, too!

However, I'd suppose using pretty much the same design you'd use for your solar panels (leaves?) to use for radiators, too. Wasting matter is only a good idea if you have solid means of getting more.

6
How can I achieve 1.5 mile (or even 300 foot) wide tree branches?
8
What is required to make a Dyson Tree a feasible space habitat?

8
We finally have a weapon to win the war against the aliens. We don't know how to deploy it
9
How would a giant, living, flying island evolve?
43
How large can a water bear become before it loses its abilities?
15
Evolution of a tree-based predator that threatens to kill/eat prey unless prey feeds it?
9
Given an apparent solar brightness of <30% Sol from Earth, how differently would plants evolve?
8
Safety equipment to survive decompression
8
How much can you learn about a planet while in its orbit?
4
What modification would make literal fire trees be able to grow?
4
Could a world exist without autotrophs, but have heterotrophs?
3
Designing the most plausible space "dwelling" planimals