Is a binary system of two planets with a common ring possible?

I want to have two planets orbiting each other, and there is a ring around both of them, is this possible?

I know rings are formed inside the Roche limit, so if the ring lies outside the planets, the material of the planets should be far harder than that of the ring, is it correct?

And a more important problem: can a binary system hold a common ring if a suitable substance is available?

No, it's not plausible for binary planets to be inside each other's Roche limit, no matter how hard the substance they're made of. Anything on the surface of one planet would be lifted off the surface by the tidal force when the other planet was overhead -- that's what being inside the Roche limit means.

Mike is right that the kind of rings we generally think of -- like Saturn's -- are only found within the Roche limit. This is so close to the planet that ring particles don't grow.

Now, it's possible to imagine a binary planet on a relatively short orbit with a moon or two orbiting both planets. This system would have to be far enough from the star to have a large Hill sphere. This is kind of like Pluto-Charon, which are almost the same size and have several other small moons in orbit.

Imagine a collision between two small moons in this system. If the objects are weak (maybe small icy bodies), they may shatter into lots and lots of pieces. The pieces would quickly be smeared over the moons' orbit, creating a ring of debris. This is not the same as Saturn-type rings. Since this debris is beyond the Roche limit, it could re-grow into a larger body. So it would only be a short-lived phenomenon (say, 100s to 1000s of years as a ballpark guess).

Here is a pretty picture of an asteroid disintegrating. This is the kind of object that could create a short-lived ring. 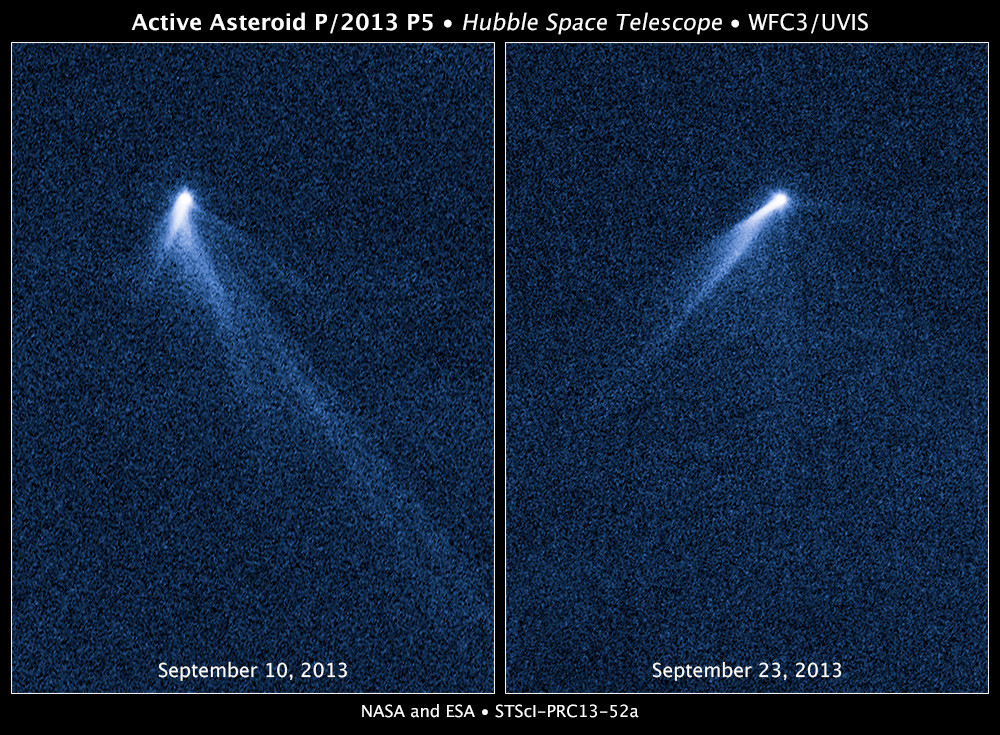 I highly doubt that it is possible or plausible: binary planets or stars can only exist outside of each others Roche limit because otherwise the tidal forces would break one or both apart. This means that they can't have one shared ring-system around both.

Placing them distant enough from each other, they each might have a ring system that luckily is smaller than their distance to each other and is aligned on the same plane they rotate around. The distance for the two, near same mass, planets here would be at least 2 Roche limits.

What might be possible though is closing in this system until the Roche limits of the binary planets overlap a bit to quite some, creating some sort of 8 figure around both planets at once with a few 'shared' items.

Possible, but not stable. It's a temporary thing that can last a couple million years at best.

In short, planetary rings may happen by two means: 1) a moon appears under the Roche limit altitude, and is torn apart by tidal forces. That forms a stable planetary ring.

2) some other means demolish a pre-existing moon; say, an asteroid that arrived from outside the galaxy and moves at speeds approaching relativistic. It would break up the moon/planetoid and form a ring for a time, but the ring will eventually coalesce into a new moon again.

Since case 1 is out of question, because the planets don't tear each other apart with their own tidal forces, you're stuck with a very improbable and temporary - but not entirely impossible option 2.

Unlikely additionally due to instability of the original orbit. The more spherical the central body, the more stable the moon's orbit. If there is no central body, any moon will be quite "temporary" as well - a captured asteroid will linger for some time, but the gravitational anomaly will either eject it again or make it crash into one of the planets. So not only did your binary planet system acquire some new moon recently, that moon had a bad misfortune of being hit by an object of a class so rare it only exists theoretically for now.

Also, I hope you're not planning for any life to have developed on these planets. The unstable gravitational field would make them quite an asteroid magnet, and the recent cataclysm resulted in a metheoritic rain so hard the whole surface turned to magma, and it's only solidifying currently.

5
Could Two Planets Form A Binary System?
1
How Close Are These Two Planets?
6
About how many planets are plausible for this binary-star system?
7
Is it possible for a planetary ring to exist beyond a planet's Rochelimit?
11
Are Trojan Planets Possible? Are Habitable Trojan Planets Possible?
2
Reality Check - Collision of a Moon prevented by turning it into a ring
12
How close to each other can Earth-mass planets plausibly form from the protoplanetary disk?
5
Could a binary planet system have a shared magnetic field?
2
Can adding mass to a ringed planet cause a huge chain reaction?