How small can you make an antimatter generator?

Reasonably speaking, I mean. I know that, theoretically at least, there probably isn't any reason you couldn't build a crude generator the size of a bacterium, but if we extrapolate from today's technology a little more conservatively, could we expect man-portable antimatter generators/batteries at some point in the far future? Could they be made so small as to fit inside a Duracell battery or a bullet? If so, how much antimatter could these miniaturized generators produce?

I ask because I had the idea for a futuristic weapon that outwardly resembles contemporary firearms but which fires bullets containing a tiny disposable antimatter generator. The generator would, in the scant milliseconds the bullet travels through the air, produce up to a few nanograms of antimatter that annihilates with the target once the bullet mushrooms on impact, breaking the trap. The result is an explosive round with a yield of a few megajoules, like an assault rifle that can fire tiny grenades at mach speeds. Is this realistic for a society with hundreds of years of scientific development on us?

I don't think this makes any sense. The problem is that current methods of creating antimatter require far more energy than you get from the matter/antimatter annihilation that results. If you have that much energy, why not just pack it into a bomb, or kinetic energy weapon?

First, to create antimatter, you squeeze a bunch of energy into one place. If done properly, the energy converts to mass according to $E=mc^2$. Half that mass is normal matter, the other half is antimatter. So the best case scenario here is that you put a bunch of energy in a bullet, use it to create a matter/antimatter pair, then recombine them to generate the same energy you already had in the bullet.

Second, you need a lot more energy than that. Of all the energy that goes into that tiny place to generate the particle/antiparticle pair, there's loads more that went somewhere else. The CERN website has some information here (it's related to the book Angels and Demons, but appears to be written by scientists at CERN, not the author of the book). It says that for every million collisions, you get 4 matter/antimatter pairs. That's about 500 thousand to one proton to antiproton. Further, each of those particles is energized with about 30 rest masses worth of energy. That is, we've dumped enough energy into a proton to create 30 protons if we converted all the energy to mass. So we're dumping about 15 million antimatter masses worth of energy into the creation of a single antiproton.

Third, there's even more energy used to do all of the above. There are magnetic coils, electricity to run the computers, etc. CERN estimates

About 1 billion times more energy is required to make antimatter than is finally contained in its mass.

You've got better luck here, but it's still going to be difficult.

The proposed methods of containing antimatter involve magnetic fields to keep the antimatter from interacting with normal matter until you want it to. I don't know how to calculate this, so I'll leave that for someone else to answer.

In general, however, I think you can make it about as small as you need. This paper on using antimatter pellets to start a nuclear explosion considers the possibility of a 1mm chamber to hold 1 µg of antimatter. The paper says

the levitation of a frozen $\overline{H}$ pellet within a 1 mm diameter cryostat at the heart of a complex thermonuclear device is a tremendous challenge for materials microtechnology. However, if metastable states of $\overline{p}$’s in Li−, Be− or possibly C−DT compounds are discovered, much simpler designs could be considered."

Since the antimatter reacts with normal matter, you'd have 2 µg worth of energy from the reaction, which gives around 180 MJ. From Wikipedia, an extremely large bullet (the 14.5 × 114 mm antimateriel round) has 32 kJ of kinetic energy. The .50 BMG round (still a very large round for a hand-held rifle) has about 15 kJ of kinetic energy. More typical rifle rounds have between 2 and 4 kJ kinetic energy.

This means a single microgram of antimatter could unleash about as much energy as 60,000 rifle rounds. Further, that energy would tend to explode outward from the contact point, so you're not just making a really clean hole through the guy, you're shredding/melting/plasmafying him to bits.

From here, they estimate 800 kJ energy released from a typical hand grenade (and point out it's not a safe assumption, so do your research). That means your bullet packs as much punch as about 200 hand grenades.

In general, you may want to scale the power down quite a bit to avoid killing friendlies and civilians and destroying the entire building. But I think your concept is workable here.

Generating antimatter is a very difficult thing to do. MichaelS has done a pretty comprehensive job with today's technology. You could make things physically smaller by using a "Wakefield Accelerator", but the fundamental issues remain.

The only other way to generate antimatter using what we understand about physics is to make use of quantum physics. It is thought that the vacuum is full of "virtual pairs" of particles, where a particle and corresponding anti-particle come into existence and disappear in an instant. We obviously do not understand this fully, since some calculations indicate that there is enough energy in a coffee cup sized volume of vacuum to boil all the oceans of Earth, yet this is obviously not apparent.

Using the idea of virtual particles, Stephen Hawking developed the idea of Hawking Radiation, which gives us an idea of how to get antimatter. 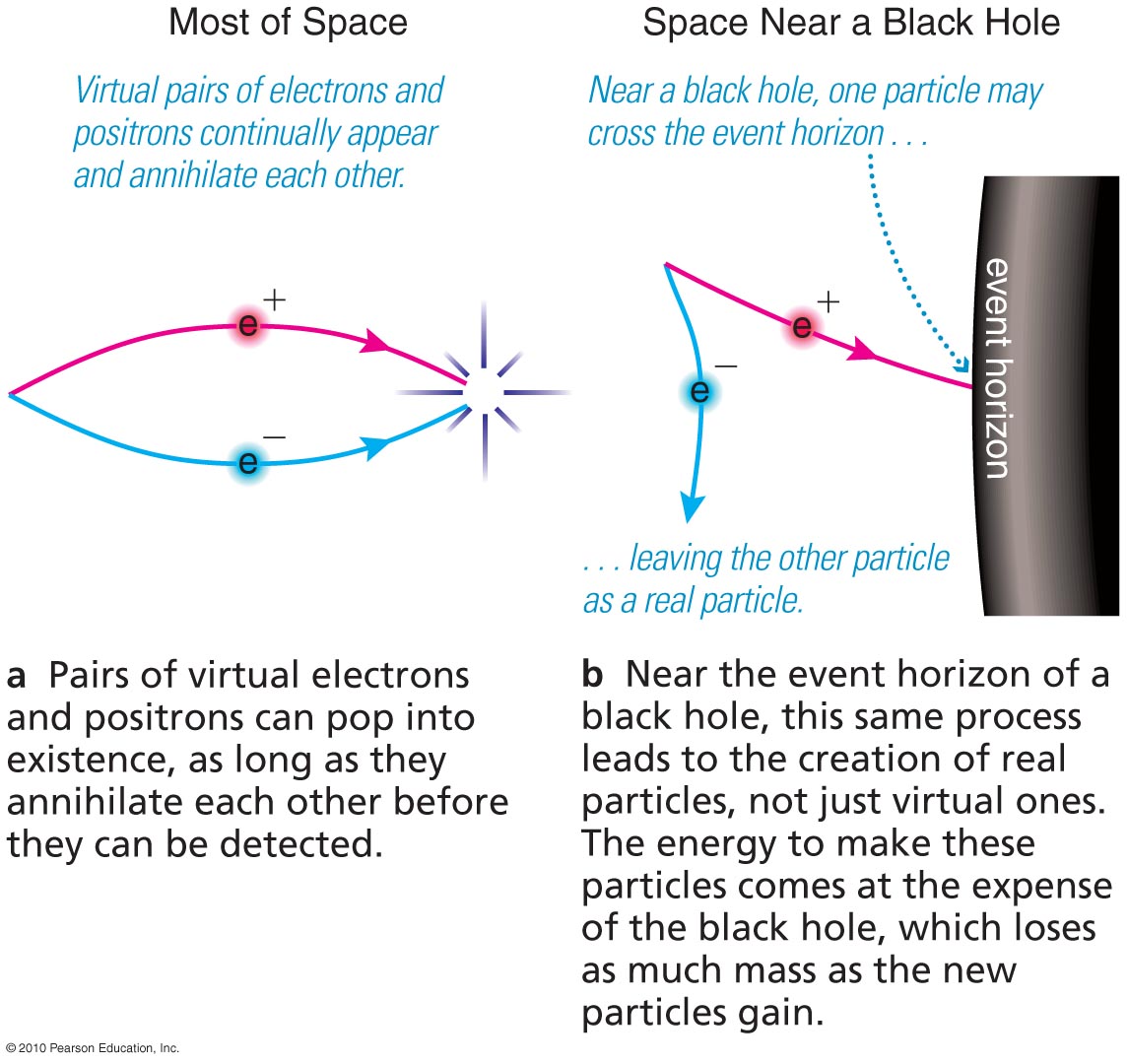 Virtual particles appearing near a Black Hole would be affected by the intense gravitational field, and some of the particle antiparticle pairs wold be separated, with one going down the event horizon of the black hole, and the other escaping to free space. (The Black hole loses the mass of the escaped particle, the process is described as "Hawking Radiation")

From this very loose paraphrase, we see that if a sufficiently strong gravitational field is available, we can collect the particles being ejected into free space. Statistically, half should be antimatter.

Of course, using microscopic black holes to generate antimatter comes with other problems. Smaller and smaller black holes emit Hawking radiation at higher and higher energies, eventually evaporating in a blinding flash of energy. This site allows you to do the calculations: http://xaonon.dyndns.org/hawking/

Not the answer you're looking for? Browse other questions tagged antimatter .

8
Anti-matter containment
6
How can I make an anti-matter "rod" warhead for interplanetary delivery?
6
Ideal size for a relativistic generation ship?