Effect of impact of a pure gas comet?

I'm not even sure if gas comets can exist naturally -- feel free to comment on that in the answers. But assume that somehow a large block of frozen hydrogen/helium/oxygen/nitrogen is tumbling through space and approaches earth. As it nears earth, it melts, then boils, but I presume it still holds together as a mass from gravity. Now it hits Earth. What happens? Everything I've read about comet impacts assume some sort of solid core -- ice, stone, metal. Would a gas comet hit us like a big wind, generating a high-pressure region and dissipating? Lots of heat? Or does is there some size where it would have enough coherence that it could still make a crater?

Ugh. I know this link is a wall of text, but please bear with me as I attempt to summarize it up.

In our reality a comet is defined as being made up of "A mixture of non-volatile grains and frozen gases." so NO, a pure-gas comet doesn't exist in real life.

Okay, that's the first bit done, now for the infinitely more complex of the two. Firstly the size of the comet; In our world, "Their average diameters usually range from 750 meters (2,460 feet) or less to about 20 kilometers (12 miles)." so they can get pretty big, however they're not very cohesively bound

"Their tensile strength (the stress they can take without being pulled apart) appears to be only about 1,000 dynes/cm^2 (about 2 lb./ft.^2). You could take a big piece of cometary material and simply pull it in two with your bare hands, something like a poorly compacted snowball."

As a comet approaches the Sun, it heats up and the frozen Gas starts to Sublimate, evaporating outward from the comet as a tail (Actually a comet has 2 tails, one directly away from the direction of travel (mostly dust) and the second in opposition of the direction of the Sun (mostly an ion trail))

So our icy ball of gases is slowly decreasing in size as it approaches us, let's say it manages to survive this and hits our planet, what would happen?

We've never encountered a comet strike full-in-the-face, in fact the closest we've come is passing through the trail of a comet called Comet Swift-Tuttle, a 133 year NEO comet famous for producing the Perseid Meteor Showers, so we can't draw from experience, but as the Comet's core would interact with our atmosphere and heat up, it would start evaporating and sublimating very rapidly.

Too small a comet, and it would burn up with no relevant effects on Earth at all (minus adding a few gases to our atmosphere)

If, however it is large enough to punch through our atmosphere, well in the link's terminology a comet's core is, and I quote; "The nucleus of a comet, which is its solid, persisting part, has been called an icy conglomerate, a dirty snowball, and other colorful but even less accurate descriptions." So, a giant, dirty snowball. Not really that dangerous. Might crush a city or flatten a few houses, but not really going to have a major impacting crater like an asteroid would.

This is the photo of the wood around the Tunguska event. 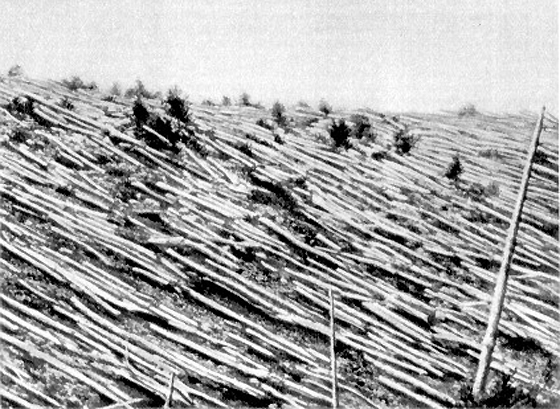 Gas comets cannot exist because either the comet is far apart from the sun and the low temperatures in space will sooner or later solidy any substance (helium is too volatile and extremely rare, hydrogen will solidify) or it is too near to the sun and will evaporate.

Nearing the Earth itself does nothing to the comet. It only gets rapidly interesting once the comet enters the atmosphere. The atmosphere of Earth is noticable in 1000 km height because of the high cosmic velocity (mostly like 30 km/s).

Once the comet hits the atmosphere, the air before the comet gets very rapidly compressed. Compression means heat and radiation, the comet gets extremely bright and it creates a massive shockwave in the atmosphere. What now happens depends on the dimensions and the material of the comet. Smaller ones will evaporate (shooting star), middle ones will desintegrate in mid-air (still causing massive destruction), big ones will hit the ground and cause a big crater, very big ones will cause an extinction event.

In case of Tunguska the comet exploded with the force of a several megaton hydrogen bomb in 5-10 km height and disintegrated so no crater was found. This is the same way a comet consisting of mostly volatile components will react. People described a light much more brightly than the sun (burning them) and being thrown by the shockwave even 40 kilometers away.

If glaciers can have pockets (/bubbles) of water and 'air' then surely comets can have [possibly large] pockets of eg methane gas; if such a comet entered our atmosphere, its gaseous content might become exposed and the friction (/ heat) of entry might causing a blast similar to that Tunguska Event (Siberia, 2008), which squished a large area but left no substantial debris for scientists to analyse...  I doubt a small 'pocket of gas' surviving entry (c/o a once huge comet) would do much damage upon impact; it would be released into our atmosphere and [safely?] dissipate [ perhaps fueling global warming].

What exactly is the difference between a comet made of nitrogen ice and one made of water ice? Just a different boiling point, no?

The typical dirty water ice comet gets close enough to the sun for the temperature to be above the boiling point, but it generally doesn't evaporate unless it's small or breaks into small chunks. The reason is thermal conductivity: the outside gets hot, but the melting & evaporation of the outer layer cools the rest and shields it from solar radiation.

The gas that does boil off the surface doesn't stick around, because the comet's gravity isn't strong enough to hold it. (You have to be a gas giant to do that :-)) It boils away. Nitrogen or whatever ice is just going to do it a bit sooner and faster than water ice.

So you aren't going to have a "ball of gas" comet hitting the planet, just a chunk of solid ice, which won't act any differently than any other solid body.

37
Deadly, Heavier than Air Gas
12
Interstellar comet hopping
0
Size of asteroid/comet compared to effect on impact
5
Fantastic gas, part 1: could a gas be 'polluted', 'rarified', or otherwise react negatively to electricity, excluding methane-like explosions?
2
Fantastic gas, part 2: what would be the source of a subterranean gas that's not organic in origin?
6
How long would an array of mass drivers take to terraform Mars by transporting CO2 from Venus?
2
Nonflammable flight gas
0
Gas lighter than air
2
Gas behavior in geosynchronous orbit