Is there a plausible way to exchange matter between spatial dimensions?

Assuming humans live in dimension 3+1; 3 spatial dimensions, length width and height, and one dimension of time,

This question is similar to mine, but the top answer only describes grafting a three-dimensional space, for example, onto the second dimension in order to have interactions.

I want to know if it's possible to convert matter between spatial dimensions without just isolating it in a bubble of its relative geometry, and if so, the methods with which this could be done.

I really like your [spatial dimensions]+[time dimension] notation, so I'll use that.

Generally speaking, if additional spatial or time dimensions were possible, it is not possible for 3+1 matter to exist in either a 2+1 universe, or a 4+1 universe. There's a graphic that has been used on other Q&A sites, and will be useful here: 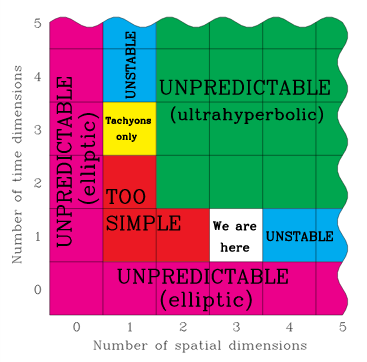 This chart shows how orbits will look in the various n+m dimensional space. as you can see, orbits become unstable in 4+1 space: this applies not only to the orbits of masses in space, but to the "orbits" of electrons around the nuclei of their atoms.

Prof. Max Tegmark has a more technical discussion of it on his website, and there is an analysis by Dr. Stein on Quora (including maths that I do not have the expertise to parse), but the long and short of it is that any 3+1 matter that was introduced to the 4+1 universe would either have to have some form of shielding containing 3+1-space for it to exist in, or it would immediately turn to plasma, due to the instability of the electrons in their "orbits."

I think this is going to remain implausible. The premise supposes an extra dimension exists that we don't yet know about, and that all the $3+1$ dimensional matter we see day-to-day is really just $4+1$ affixed to a common plane on one of those spatial dimensions.

Which is fine up until you realise that matter not on our common plane has mass too, and we should feel the gravity of that matter.

But we don't. And it'd be hard to imagine a world where we would feel this extra gravity and still have relate-able experiences.

But what if the universe was mostly empty in the extra dimension?

Well that would fit suitably, but it implies there's something special or different about that dimension. It's not a normal spatial dimension.

Let's forget about that for a moment though. Let's pretend we have a $4+1$ space, and for whatever reason, matter is all on one hyper-plane of that space.

Gravity feels exactly the same in this as it does in 'normal' space. In fact, mathematically, it's impossible to observe the difference.

By definition, there's no extra stuff in the extra dimension, so we can't mine it for valuables.

Transportation is basically wormholes, but gravity leaks through - in both directions! You could be tempted to hop off the conventional hyper-plane to travel in a straight line from $A$ to $B$, but there would be no ground to prevent gravity from sucking you down into the centre of the Earth.

Another question I have relates to light. If the fourth spatial dimension is behaviourally, the same as the other three, light should travel through it just fine. Anything that produces light in our dimensions should also produce light in that one too!

Quantum mechanics gets interesting here, as mass curves space, and light follows that curvature. Squint your eyes and look at this from a funny angle and you could justify this as an explanation for quantum tunnelling.

And here's where it goes to hell. Electrons have mass, and electrons are also very well known to exhibit quantum tunnelling. Following the idea of photons, electrons are temporarily venturing off our hyper-plane to tunnel around solid matter. Protons and neutrons do this too. Small atoms do it. Large atoms do it. Small molecules do it. There's an unspoken contest within the physics community to demonstrate larger and larger objects exhibit quantum mechanical effects.

There's literally no reason why mass shouldn't be everywhere in this extra dimension.

I think you want a dimension that doesn't follow the 'normal' physics rules.

Not the answer you're looking for? Browse other questions tagged science-based reality-check physics alien-geometry .

46
What would the periodic table of a 4-Dimensional universe look like?
3
Geography in a universe with 4 spatial dimensions
3
Can quantum spin be converted to macro systems?
6
Spatial dimensions with non-equivalent dimensional eigenvalues
2
Is there an effective difference between distances in 3d space and higher dimensional space
5
When universes collide
12
How would a higher-dimensional being enter a lower dimension?
4
Could one create an artilect capable of perceiving more than three dimensions in a simulation?
2
How could 4th Dimensional "pockets" of space form in a 3D world, and how would 3D objects entering and exiting this space appear to observers?
4
We actually live in 4D space and everything we know about all below a certain tiny scale is a conspiracy: who needs to be in on it?