Meeting other sides of a cube world, cheapest method?

Lets say that somehow a cube world came into being, on an axial tilt around its sun, four of the sides are in-habituated by intelligent life, one of these sides (relatively) quickly realized that their world is cubic and wondered what exists on the other sides. After thousands of years they have decided (in a space race-esque fashion) that they must reach the other sides. But they are still at the drawing board, looking for the cheapest method.

They obviously have a lot of choices, from traversing the high gravity and inhospitable edges to building a rocket to just plain digging. Assuming that they have the same technology as us, what is the cheapest method of reaching other sides of a cube world?

The dimensions of my cube world are 7000 by 7000 by 7000 kilometers, the gravity attracts everything to its very center point

Building on daveyfaherty’s answer, I suggest building a train track (for pressured trains with cogwheels; i.e., toothed wheels) most of the way up to the edge.  Then dig a valley (cutting a notch into the edge of the cube) like this: 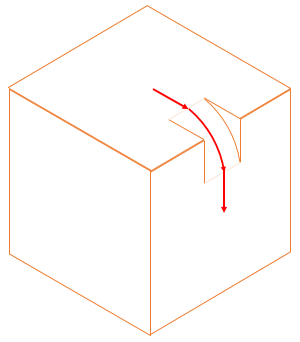 and run the tracks through that and down the other side.  The illustration is not to scale; the valley should be deep enough to make the track bend as much as one going over a hill, rather than 90°, as if it were going over a mountain peak.  This shouldn’t be much harder than digging a tunnel through a mountain, or digging the Panama Canal.

The first thing to remember is how gravity would work. It wouldn't be perpendicular to the cube faces; rather, it would pull toward the center of the planet.

This is close enough to gravity on a spherical planet that our intuition for Earth can help. Let's imagine that your planet started as a sphere, with radius 3500km. This is a little over half Earth's radius, so if it's made of the same materials as the Earth, its mass will be about one-eighth Earth's.

Now build up the edges. Add material around the outside of this proto-planet to turn it into a cube. You're effectively creating the most enormous mountain range ever seen. On Earth, these mountains would be 2640km high; for comparison the Kármán line (aka the upper edge of the atmosphere) is at a measly 100km. And that's just the edges. At the corners where the edges meet, the peaks would soar to 4664km above Earth's surface. The International Space Station would crash into the side, less than one-tenth of the way up.

The volume of your cube-world is now significantly increased, but still less than a third of Earth's. Whatever atmosphere it has will be pooling in the middle of the faces, with the peaks in hard vacuum. With nothing protecting it, the surface would be stripped bare by direct sunlight.

But could these mountains be crossed? Yes. The cubeworld's inhabitants have an enormous advantage in their "space race" that we didn't: there's a solid surface underneath them the entire way. They could create an insulated and airtight "train" of sorts, then push closer and closer to the edge, laying out more tracks with each expedition. The slope would go up to effectively 45 degrees (assuming you aim for the middle of an edge), so toothed wheels and tracks would be necessary to keep the train moving. But unlike a real mountain, the ground remains flat all the way to the edge, without any change in slope you could point out. It seems to get steeper and steeper, but in actuality you're moving in a straight line while the ground moves away beneath you. And straight lines make train tracks much easier to use.

Each group of explorers could get farther and farther into the desert. Without an atmosphere, solar energy would be more efficient, and the astronomers could build their observatories effectively in space. But some people keep trying to explore farther, toward the clearly-visible end of the planet. Unlike on Earth, the horizon would actually get closer and closer as they drew near the edge. Until one day, the expedition would eventually reach the top, and look out over the edge of the world.

I propose pressurised, radiation-shielded trains with an oxygen supply. Crossing the edge involves many of the difficulties of going onto space, but never leaving the source means the journey can be made a lot more efficiently than leaving and re-entering atmosphere on earth.

Tracks with a gripping capability would be safer than free-roaming vehicles, as you don't want to be rolling downhill for several thousand kilometres in the event of an accident.

No that causes more problems than it solves.

Maybe a carriage flipping mechanism at the very corner to set the carriage straight for the other side.

Regular wheels wouldn't work, you'd need some sort of toothed mechanism so they can really climb/hang as they travel.

Big disclaimer, I don't know crap about physics, but:

As you approach the corner, the gradient approaches 45% to horizontal. Assuming earth-like volume, the atmosphere would be "bowled" in the center of the square sides, so it would be extremely cold, no atmosphere, at the edges. Imagine if Mt Everest was 100 times higher.

Easiest crossing would be at the equator, at the corners would be much harder - more climbing, more time outside the atmosphere.

Maybe the middle 2/3 of the cube would be habitable, with the outer 1/6, at the shortest distance across, being outside the atmosphere. As such, it would take a long time to figure out there's anything over the edge, never mind to try and cross it.

An adventurous type could use long-range remote controlled vehicles with recording equipment to find out though, and it would be hugely cheaper than a space probe, to get into action. There could even be an X-prize like "How far" competition, egging people on. The kind of people who make supersonic cars might be the likeliest candidates.

Digging isn't an option, as they will never penetrate the 'crust'.

So the cheapest option would be to build a 'stairway' over the edges. Depending on how plate tectonics are lied out, this will probably be a miracle of engineering though (though doable)

I’ll answer from the point of reference of my own cubeworld megastructure which has inspired my current novel effort.

There are access hatches and maintainance corridors beneith that some residents may find, even corridors to connect the faces. That would be the cheapest by far, if available to them.

There is also a travel infrastructure based on magnetic flux pinning. A resident who manages to access an engine, gain access to the command system and figure it out, could simply be whisked off to any point on the surface of the cube or interesting places nearby.

But, rather than the underlying megastructure providing access, it may be actively working to hinder the resident’s exploration.

In this case, the solution is not to put brute force into it. The megastructure can always destroy your effort with overwhelming force, or simply make any such expidition or unauthorized launch “disappear”.

Instead, they would have to be clever. Work to hack the system, convince it to let you out and turn the awsome power to your desired goals.

Others have suggested a giant train - Good luck excavating that track! As you got nearer the edge, any disturbed rock would roll back down the enormous mountainside, causing enormous landslides and destroying your track.

Workers on skyscrapers tether their tools and supplies to them and wear hard hats, as a screwdriver or nut dropped from 20 stories up can be deadly. Your workers would have to worry about bulldozers which slipped and overturned rolling for miles down the tracks!

We'll ignore natural landslides, as your edge mountains must be made of something which doesn't suffer from this problem. If natural landslides happened, they would eventually wear down the mountain. You might build it in a giant spiral, or go at an angle and do switchbacks (with artificial cliffs and plateus built above the track to stop landslides from the next track up).

Honestly, I think a rocket would be easier.

Also, if you did meet someone on the other side of the cube world, they'd likely be somewhat like you - and building a train to the edge. If you had a lot of excavating equipment up there, it would be easy to destroy their train by cutting out enormous spherical boulders and rolling them down the hill.

Not the answer you're looking for? Browse other questions tagged science-based reality-check nonspherical-worlds or ask your own question.

23
How would a civilization that has been living on a “cube” Earth differ from one on a “spherical” Earth?
3
Gravity on a Cube World
5
Faux-natural barriers between environments in a world-sized zoo

4
Is a spherical core and magnetic field possible in Cube world
6
Celestial arrangement for the Cube World
4
Can a cube world have magnetic poles?
5
How would weather and climate be different in a world that always receives sunlight from all sides?
5
How can I prevent a cube world from going spherical
8
Would aliens evolve a method of communication other than speaking?
107
Would planets be cubic in my “cuboverse”?
3
Is there other similar/better method like TENS units for external control of human muscles?
14
A clothing material or other method to slow free-fall descent down walls