How would a creature produce and store Nitroglycerin?

This question began due to a certain fictional monster. Where it was stated to be able to secrete explosive goo activated by its saliva, which would coat its boulder-like arms and explode when smashed against the ground (or human whichever works best).This creature has nothing to do with the question, it is however the origin.

Which led me to contact explosives and Nitroglycerin. Okay, so Nitroglycerin isn't exactly the most safe substance to transport even by modern standards but I insist that it should be Nitroglycerin (Think of the possibilities, nitroglycerin-propelled spikes and bombs).

However, what would allow a creature to produce Nitroglycerin and then store it for future use?

The biggest problem might be storing such a volatile substance, as funny as it might be to have creatures that explode when they walk it doesn't make for a feasible real creature.

I only need a biological way for a creature to store this in its body and to produce Nitroglycerin, there is no need to work out other things like how it might have evolve and additional organs that would allow its use in one form or another. It is a nice bonus of course.

How to make Nitroglycerin

So I actually did this with some friends in high school (with stolen supplies, right after Columbine, got suspended for weeks, fire department searched my house for explosives, etc.) and it did in fact go bang, so I can confirm that the process is not super hard, if done in beakers. In an animal, this process would be tough.

Okay I'm going to stop there. Getting the three ingredients is really not feasible in a biological organism. If you were able to get those three, you could pretty much just mix them together a few seconds before discharge and then shoot them at someone and they would end up part exploded and part covered in horrible acids. So it would be an effective weapon, but storing all those toxic ingredients in a body isn't really compatible with Earth's carbon and water based biochemistry.

Short answer: The creature would most probably not store nitroglycerin. And if it did, it wouldn't grow old.

Because I don't want to type nitroglycerin a thousand times, I will call it "nitro" from here on.

Let's first examine Nitro closer (for chemical properties, Wikipedia is usually a safe source). Nitro is highly volatile, and will go off if shaken, heated, or exposed to any kind of shock or friction. No creature could store this stuff in pure form in its body. It will not detonate from body temperature (as its auto-ignition temperature is 270°C), but it might be sufficiently agitated if the creature falls, jumps, or anything.

Nitro can be diluted down with other substances, making it safer to store. But these substances would need to be removed to "arm" it again, which I think makes this idea not feasible for our creature.

Nitro also becomes more stable if cooled down to below its freezing point (about 13°C). Now THIS could be a thing. If your creature lives in arctic areas, it could have pockets on the outside of its skin or fur, where the temperature is always quite low. When there is danger, it could "pull" these pockets back inside, where the nitro thaws, and probably detonates soon after. I could also imagine a pocket of tissue that is flooded with blood to "arm" the nitro.

Actually, a strange alien creature with long antennae-like tentacles on its back might work. The tip of the antennae might hold a little nitro, and they could arm them and smash them at their enemies, sacrificing the limb in the process.

Now, if there is ever some serious global warming, or your creature cuddles with its loved one, it will have a problem.

But don't be fooled. Nitro burns at over 5000°C, so these self-detonating devices are absolutely devastating for the creature using it. At least the limb that stored the explosive will be lost for good, even it was only a small amount of nitro.

I have spent some time trying to think of a way to biologically fabricate this substance, but I am no expert on this area, and you asked for science-based. Therefore, I decided to leave this part of the answer to other users that are more well-versed in this.

You don't store it as straight liquid nitroglycerin. You're an animal! You need to be able to run, jump, fall, etc. without exploding body parts. So, what do you store instead of nitroglycerin?

First, let me introduce you to guncotton, aka nitrocellulose. It is chemically very similar to nitroglycerin, but a lot more stable. It was even, for a long time, the primary military explosive substance.

If you mix nitroglycerin and guncotton, you can get a double-base explosive powder. Aka, modern smokeless gunpowder.

The advantages of storing your nitroglycerin mixed with guncotton as an explosive powder should be obvious. Explosive, yes, but stable under ordinary conditions. Ignition temperature is hundreds of degrees. Can be shaken as much as you want.

Unfortunately, figuring out how to create double-base explosive powder is beyond my chemistry knowledge. If I remember tonight, I will try to google around for it, but searching "how to make gunpowder" at work seems like it might not be the best idea.

I think biological systems will not make nitroglycerin in the manner used by chemists, as detailed by kingledion. 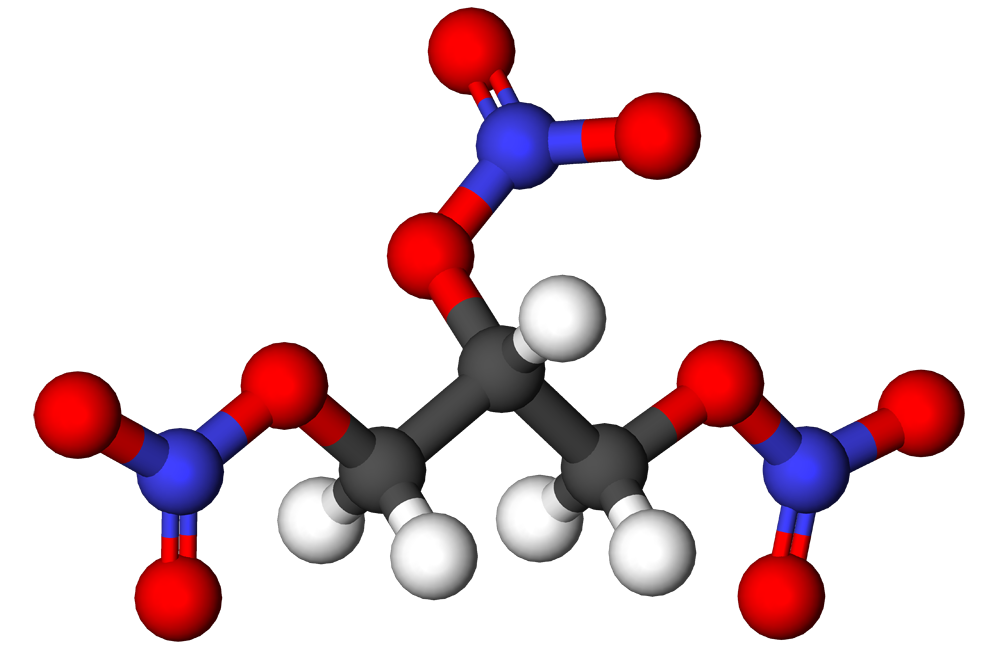 Rather, the atoms will be stuck together individually from smaller groups or modified from a similar molecule, using a series of catalysts. As Wikipedia notes, “Chemically, the substance is an organic nitrate compound”. Nitrates are naturally occurring and are processed by bacteria as an important part of the ecosystem.

So, suppose that some bacteria figures out the trick of making nitroglycerin. Then the animal will use a symbiotic colony of these. Note that bacteria are the go-to for novel metabolic reactions, and are the original source of mitochondria and chloroplasts as well. This symbiosis allows animals to digest different food sources. So, there is precedent for this concept.

Now the secreted nitroglycerin will not be stored as liquid, but will be passivated as in the manner of dynamite etc. by keeping the molecules stuck to the surface of another material. This can be used like dynamite and still fill your requirement. Or, the matrix material can be removed by another process: say it evaporates quickly once exposed to air: the animal can excrete a blob of material and then withdraw as it becomes more unstable over the next few minutes.

My chemistry is nowhere near figuring out a pathway. I will say that the answer that rejected it based on the required acids not being in biology isn't enough, though—life can often use pathways that aren't practical in the chemistry lab.

As for storing it, take a look at dynamite. That's nitroglycerin that's been absorbed by something. It's much safer to handle. My understanding is that what you really need is to avoid any possibility of it sloshing around or otherwise being subject to a concentration of force, though.

If my understanding is correct this suggests a way a creature can work with it—the organ that makes it consists of a whole bunch of tiny sacks in which it is produced. Make the organ spongy and capable of regeneration. So long as you keep the density low enough a blast can't propagate even if one sack somehow comes to be detonated. To weaponize it the sacks empty into a chamber.

What to do with the boom is another matter, though. It is going to be extremely hard to use offensively. I doubt a creature can make a safe means of throwing it and if it works by striking with an explosive tip that's almost certainly going to be more energy expensive to replace than the value of its prey.

Thus the only use I see for it is defensive. In this mode I can see two options:

1) Lets look at some lizards that can sacrifice their tail to escape. Consider the boom-lizard: it has a nitro organ in its tail. The chamber it is concentrated in contains a structure to make it more sensitive, once it's been triggered a tail slap results in detonation. Unfortunately, hitting the target with its tail won't be anything like certain.

2) Instead, how about a creature with several nitro organs in its body. It has no means of releasing the nitro, though—rather, the death of the creature releases it. The chambers are designed so that they will detonate if crushed. This is akin to a poisonous creature—it doesn't save the creature but it teaches predators to leave it alone. The advantage of nitro over poison is your predator won't evolve an antitoxin.

This idea is troublesome for at least four reasons:

Here are some thoughts on how nitroglycerin might be stored in such a way that it would become activated only once outside the organism's body (changing from a dilute to a concentrated form, most easily achieved by evaporation of the solvent.)

Nitroglycerin owes its exceptional explosive power to largely to its near optimal oxygen index. The idealized explosion reaction is as follows:

As you can see, there is an almost insignificant amount of free oxygen left after the explosion.

Compare this to the decomposition of ammonium nitrate for example. This is a poor explosive alone but the decomposition produces a lot of oxygen. Combining it with fuel oil to take advantage of the oxygen gives a much more potent explosive. At the other end of the scale we have TNT, which is a less potent and safer explosive than nitroglycerine because it is oxygen deficient. In the idealized explosion reaction, most of the carbon remains as unburnt soot:

Nitroglycerine (and its lower molecular weight analogues ethylene glycol dinitrate and methyl nitrate) can be stabilized by cooling or by dilution with inert material as explained in wikipedia. They are not particularly water soluble. Nitroglycerine is absorbed into the mineral kieselguhr to form dynamite in order to make it safe.

Nitroglycerine also dissolves in organic solvents (ethanol and acetone being the two most likely from a biological point of view.) in the absence of oxygen to burn in they can be considered as "inert." As they have lower boiling points than nitroglycerine, they would tend to evaporate leaving behind the more explosive pure nitroglycerine as a residue.

Not the answer you're looking for? Browse other questions tagged science-based biology biochemistry or ask your own question.

11
How did the Booze-Rat evolve its defensive mechanism?

2
Would an alien species need to produce waste?
3
How could the earth produce more oxygen?
7
How would an ecosystem based around chemotrophs produce oxygen?
10
Could a cow produce bottled milk?
3
Creature to retrieve criminals and imprison them
18
Could a living creature produce graphene?
6
How to produce milk that's similar to blood?
6
Could a living creature produce silicon carbide?
4
How would a creature like this work?