This, unsurprisingly, is also related to mermaids.

Spearguns using rubber bands and the like are popular underwater weapons, so slingshots would be useful to mermaids. The problem is, these require(?) vulcanized rubber, which was invented in the 19th century.

I'm wondering if there is any way you could get this, or a similar material sooner, or stumble onto it someway. This may be more plausible than it sounds.

The legend goes that Goodyear, who was not college trained, accidentally spilt rubber and sulfur onto a hot stove, and noticed it become a strong material. He claimed it was no such thing, but if it is technically possible that could happen, any alchemist messing with sulfur and rubber might discover this, and mermaids may gain access to such an invention.

But, I really need a more expert opinion on this, to know if it's really plausible, or how it could come about. As a side note, rubber use in Europe appears to have started in the 18th century, not sure why there wasn't any sooner.

Effects on the Ancient World?

There is also, as a side question, how this would affect the ancient world if vulcanized rubber (and rubber trees) were discovered. But this is less important to me, as I mostly want to know about its plausibility for it to happen.

Assuming that you have access to rubber producing trees and a culture with some concept of technology and experimentation developing vulcanization is reasonably plausible. Elemental sulphur occurs naturally and has been known since antiquity.

This sort of discovery is helped by having a tradition of alchemy (or some local equivalent) which is the 'mix it up and see what happens' school of discovery and while not in itself science is a good starting point for chemistry and materials science to develop from.

It is also worth noting that even 'accidental' discoveries rely on the person making that discovery to be of the right turn of mind to a) notice that it might be useful and b) be able to follow it up and work out how it happened and how to reproduce it.

A good example of this is the development of the metallurgy of steel. Blacksmiths were able to produce heat treated steel tools long before the actual mechanism of hardening and tempering steel was understood in a scientific sense. This is helped by the fact that blacksmiths were among the first specialist artisans and as such spent their entire careers working with metal. This represents a middle ground between properly rigorous scientific research and the implausibility of accidentally discovering a complex technical process.

Rather than rubber or other material that stretches significantly, use a tortion spring like a Roman catapult. 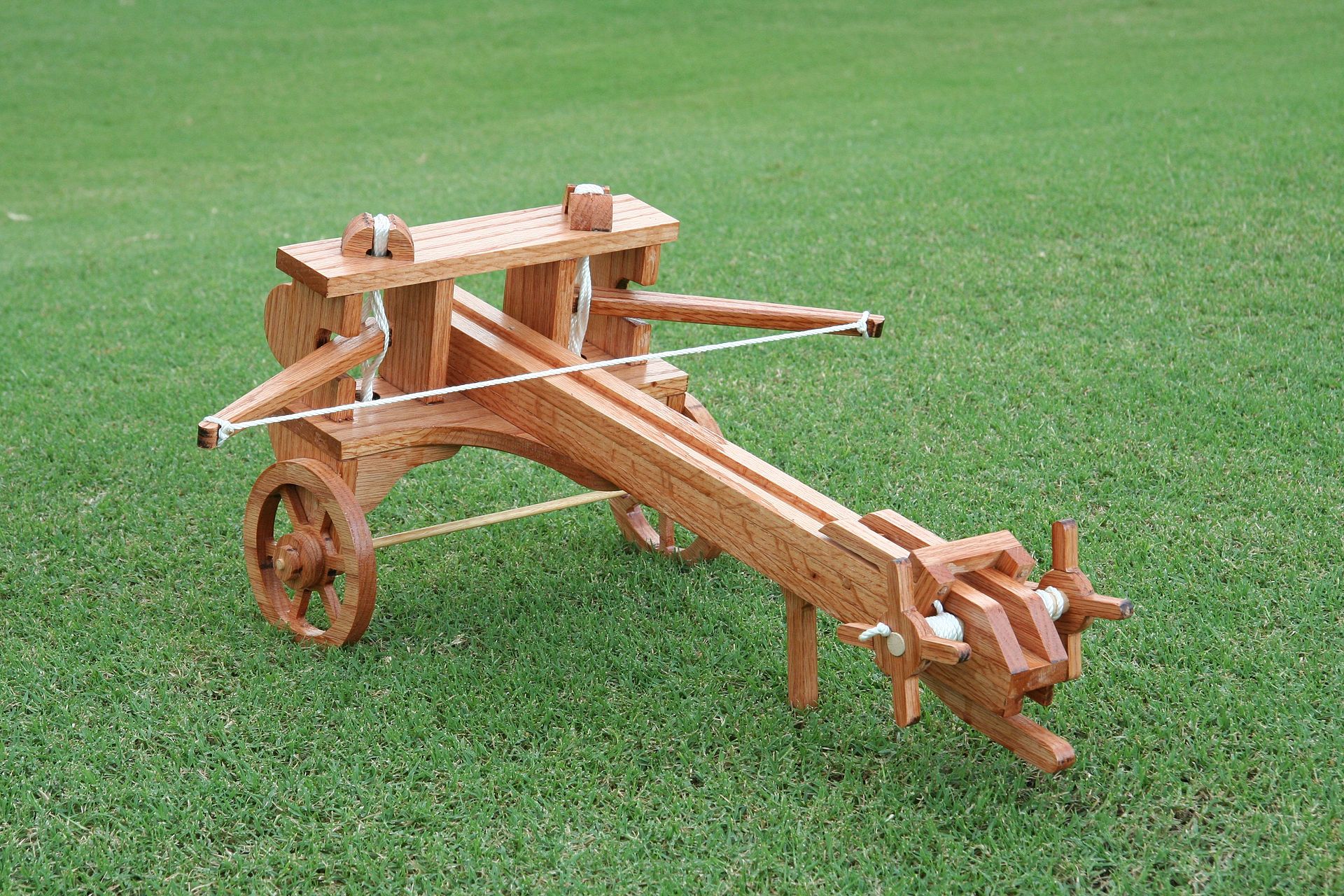 In the photo you can see that this is made from ordinary rope. It only stretches a tiny amount when twisted. They used line made from the archilles tendon of cattle. Anything that functions as rope will work to some degree, but may wear out quickly.

More generally, see that you don’t need ellastic like in a modern speargun. Any kind of compressive, tension, or bending-moment can be bent [pun intended] to the task, by using simple mechanics to couple the energy storage to the desired motion.

Maybe they’ll use the bending of chiton shell material to form a bow, inspired by the mantis shrimp.

All in all, the merfolk should find an alternative elastic to provide mechanical power for spear-slings.

Not the answer you're looking for? Browse other questions tagged science-based technology technological-development materials scientific-development or ask your own question.

31
Long-abandoned, yet still working ancient technology
8
How could an ancient civilization build a bicycle?
12
How can my ancient Roman civilization develop effective steam power for use in ships?
1
Can this world invent gas cylinders early?
7
Ancient Egypt - Primitive Blockchain Technology
4
Practicality of a ship-sized twisted-rubber engine
5
How to improve the speed of ancient mariners
1
Orbital tether snap like a rubber band?
18
Silver needs to make contact with the skin to be effective, but vampires are wearing armor. What now?