My setting is a habitable moon with freestanding water orbiting a gas giant. Originally I thought the gravity of the jovian world would tend to draw water toward the tidal bulge of the moon itself. The more I read about even relatively simplistic terrestial tides the more confused I've become. It appears a lot of the concepts taught to me in school are outmoded (hardly a shock there). The tidal lock should mitigate any coriolois effect. I'd expect any other moons in orbit of the gas giant would have some impact in the tides, especially if some of them are joined in a laplace effect. I'm thinking that would create some interesting tidal zones, but isn't my primary focus.

Currently my thinking is that there'd be a large ocean facing the gas giant, with a mountain range or large plateau caused by the Jovian gravity nearest that world. The far side of the moon, tidally locked, would never face the Jovian, but would receive sunlight from the sun, and if the orbital period there was sufficient that could even be every ten to twelve hours. It would be much colder, with an ice cap (tidally locked planets generally not having much difference in inclination to where they were captured).

Assuming a relatively close position (say similar to Io orbiting an even larger gas giant than Jupiter), are there any generalities we could assume from the primary gravitational force from the gas giant acting on the tides and overall formation of the bodies of water? I'm also assuming the world is tectonically active from the tidal forces on its internal structure, has a magnetic field, has about 40-45% surface water, 10-12% ice cover, and has ocean basins of similar depth to Earth.

Thanks for any help you can provide.

Rory's answer is nearly correct. You will see a tidal bulge on both the side of the moon facing towards the gas giant and on the side facing away. This is because the pull of the gas giant reduces as the distance increases.

However your moon is tidally locked. This potentially makes a difference. If the moon is not tidally locked then only the liquid (water in this case) has time to respond to the changing gravitational forces and you get high and low tides. However on a tidally locked planet you can expect to see the crust actually deform into the same bulged shape as the ocean would take. This would be especially true if the moon was still molten when the locking began but would gradually become true even without that.

In other words you may (or may not) depending on how much the crust of the moon has adapted to the tidal locking see deep oceans at the side towards and away from the gas giant. Either way the ocean there would be static, it would have winds and waves and weather but it would not have tides due to the gas giant. There would be solar tides (the interaction of solar and lunar tides is why we have bigger and smaller tides on earth) but they are much weaker.

This diagram from ck12.org shows where water ends up on Earth.

Yes, this is dramatically simplified, but look at the side away from the moon.

The implication here is that you will not only get an ocean on the side facing the moon but also on the opposite side.

Interestingly, because of the tidal lock, if the moon is in the same plane as the sun, you will find the area directly below the moon on your planet's surface may be a fair bit colder than the rest of the equator (as it will be in shadow for a period once a day) - which could lead to some interesting weather patterns and ocean current flow.

If the plane of the moon's orbit is inclined, then you can still get seasons as you would expect. 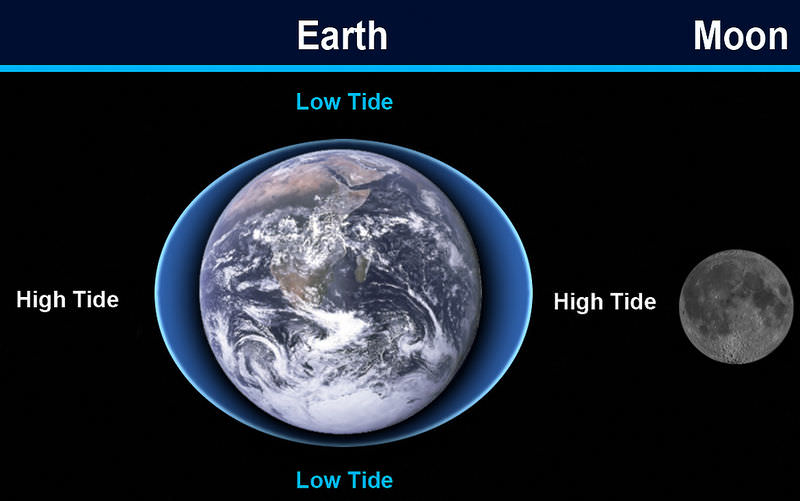 -1
Would An Earth-Like Moon Be Tidally Locked?
13
Scientifically plausible way to sink a landmass