What are the effects of constant daylight on plantlife

On a world I am building, the day/night cycle last 9 years, meaning that there are interesting forms of life. Plants are the most interesting of these living things, which have many interesting forms of keeping themselves alive. The problem is that I am unaware of what the effects of 4 and a half years of daylight would even do on plant life. Keep in mind that rain and storms do occur, just that night is absent.

Would they grow much quicker with constant food or dry out from the constant heat of day? What are the effects of years of daylight on plantlife

The effects will not be universal, for one. it will depend on the plant, and the adaptations that species has undergone to survive the day/night cycle.

Plants (in our world) rely on the day/night cycle to regulate their seasonal growth, among other things - without that cue, they may not adapt correctly. There are two kinds of plants, those that regulate themselves by the length of day and those that depend on the length of night. I recall reading about some experiments back in biology class, where the light or dark cycle of plants was briefly interrupted (a flash of light when it was "supposed" to be dark, the lights turned off for a bit when "supposed" to be light) - to figure out which part the plants were keeping track of. I think the results were that different plants kept track differently, depending on their purposes. Leaves will want to know about sunlight, flowers or pest control will want to track dawn and dusk, and so on. Some were highly dependent on the night-length, and whether it was shorter or longer than the day length, while others relied on different factors like temperatures.

So, if this world began with plants or acquired plants which were adapted to our world, any of those which relied on the day/night cycle would die off rapidly, irregardless of other factors, since they couldn't control certain kinds of responses. Day-neutral plants would have a better chance of surviving, though. I suspect desert plants, and tropical plants, would likewise adapt better to the daylight years - being accustomed to plenty of sun and warmth, though they would die back sharply in the night years, so annuals with an extra nine-year cycle. Polar plants would also perhaps survive well, being accustomed to long day/night cycles anyway - and the temps would likely be more, hm, stable at the poles. Temperate zone plants would not adapt well, though, I assume, since daylight cues would be all messed up, with much wider variances ("yearly" summers and winters will likely stack up on top of the "day" and "night" temperature variances, which will exaggerate the heat and cold).

Of course, if you're starting with plants that are already adapted to this world... they will likely be adapted, that is, it will be normal to them. I would expect big seasonal variations, as I mentioned, and there will be annuals (which will run rampant when they can, and seed and re-sprout when the temp is too bad), and plants which persist through all temp variances with slower and more steady growth, evergreen-alikes which stay alive and deciduous-analogues which hibernate through the worst temp changes. Just, they may have to hibernate through worst heat as well as worst cold, "day-summers" will be desert-like, night-winters will be frozen solid. Plants will need to store up food for the night-winters, especially.

I sort of expect that the "winters" will act more like nights (shorter periods of less productive, colder time) and the "nights" more like winters (long bleak periods where there's no food, and survival is questionable), for the plants. The planet's rotation is quite slow, if it orbits the star eighteen times before it has rotated on its axis once - it is very nearly tidally locked, yes? I expect the "dawn" and "dusk" areas will end up acting like de-facto spring and fall, months or even a year of warming up and cooling down the plant growth.

See (e.g.) Why Vegetables Get Freakish In The Land Of The Midnight Sun among others I found with the Google search alaska giant vegetables. 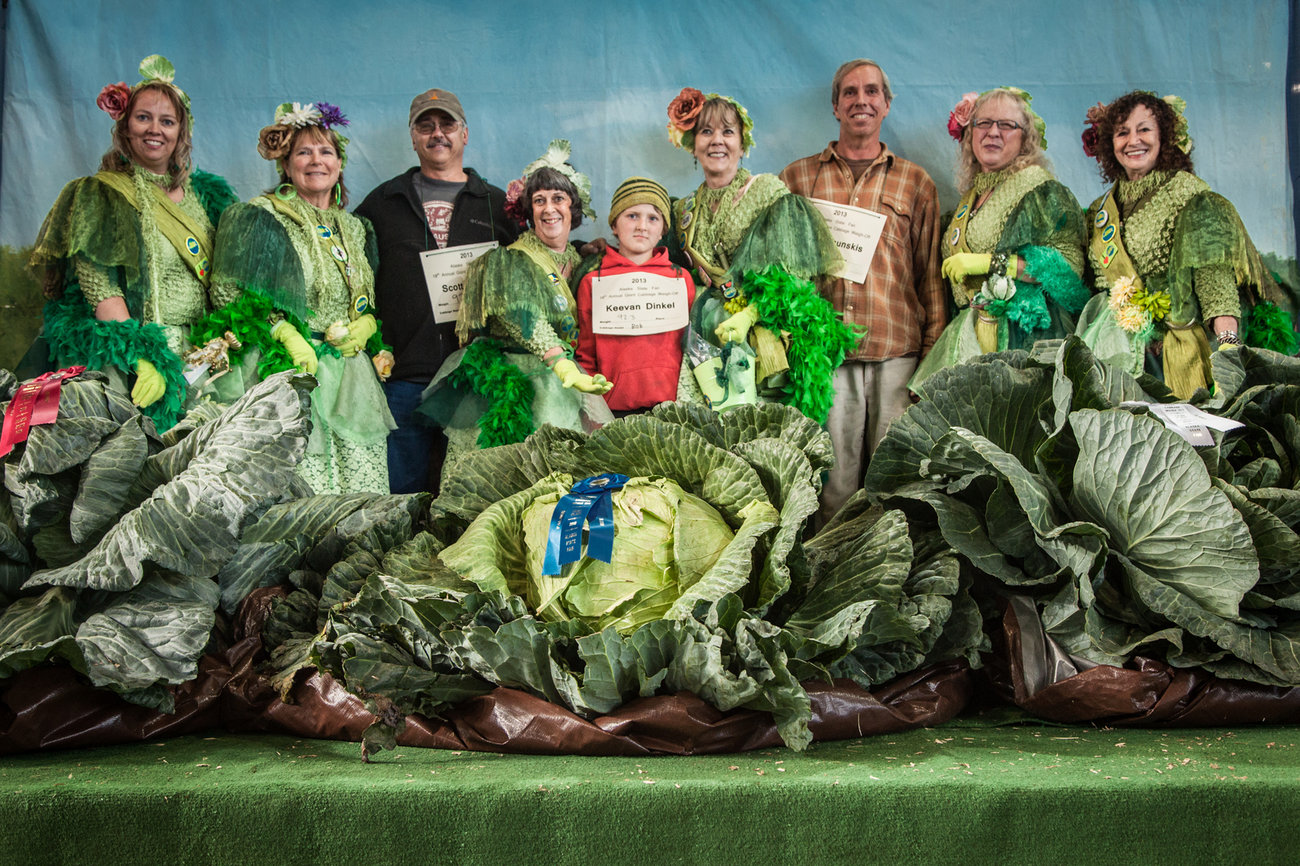 Giant Cabbage Weigh-Off 2013 winners (with placards, left to right): Scott Rob (92.1 pounds), Keevan Dinkel (92.3 pounds) and Brian Shunskis (77.4 pounds). The growers are joined by the cabbage fairies, a group of women who for 15 years have volunteered at the cabbage competition.
— Clark James Mishler/Courtesy of Alaska State Fair

Not the answer you're looking for? Browse other questions tagged science-based reality-check flora day-night or ask your own question.

5
How would plants survive an extremely long, cold night
8
How long could life survive The Night?
7
Thermal Energy Recycling from Daylight Operation to Power Night Time Operation of Volatile Computer Storage
6
Can you have reduced visibility (due to fog) but an atmosphere that is still breathable?
2
How would the people survive in darkness and be affected by the short periods of sunlight?
4
How would a 384 hour day/night cycle on a desert planet affect the weather?
6
What are the day and night fluctuations for a moon orbiting a planet the size of Jupiter?
5
Water & Nutrient Cycle of an upside down forest
25
What are the physical effects of a person living their entire life underground, and how would it affect them if they ever came up?