One of the inspirations for this was Tactics Ogre: Knight of Lodis, where I liked their depiction of slithering, combat-worthy mermaids.

I've been trying to develop mermaids who make pilgrimages to land cities, and have been considering mermaids with shore-side villages and towns. For this purpose, I've been trying to work out ways they can be more capable on land (not as capable as humans, but more so than a flapping fish).

For modes of movement I've considered... The main one would seem to be shuffling/crawling, since they likely can't slither. They could assist this motion with their hands, with their tail, and potentially with extra fins near the waist (the picture below has an interesting example of an elbow-like fin). 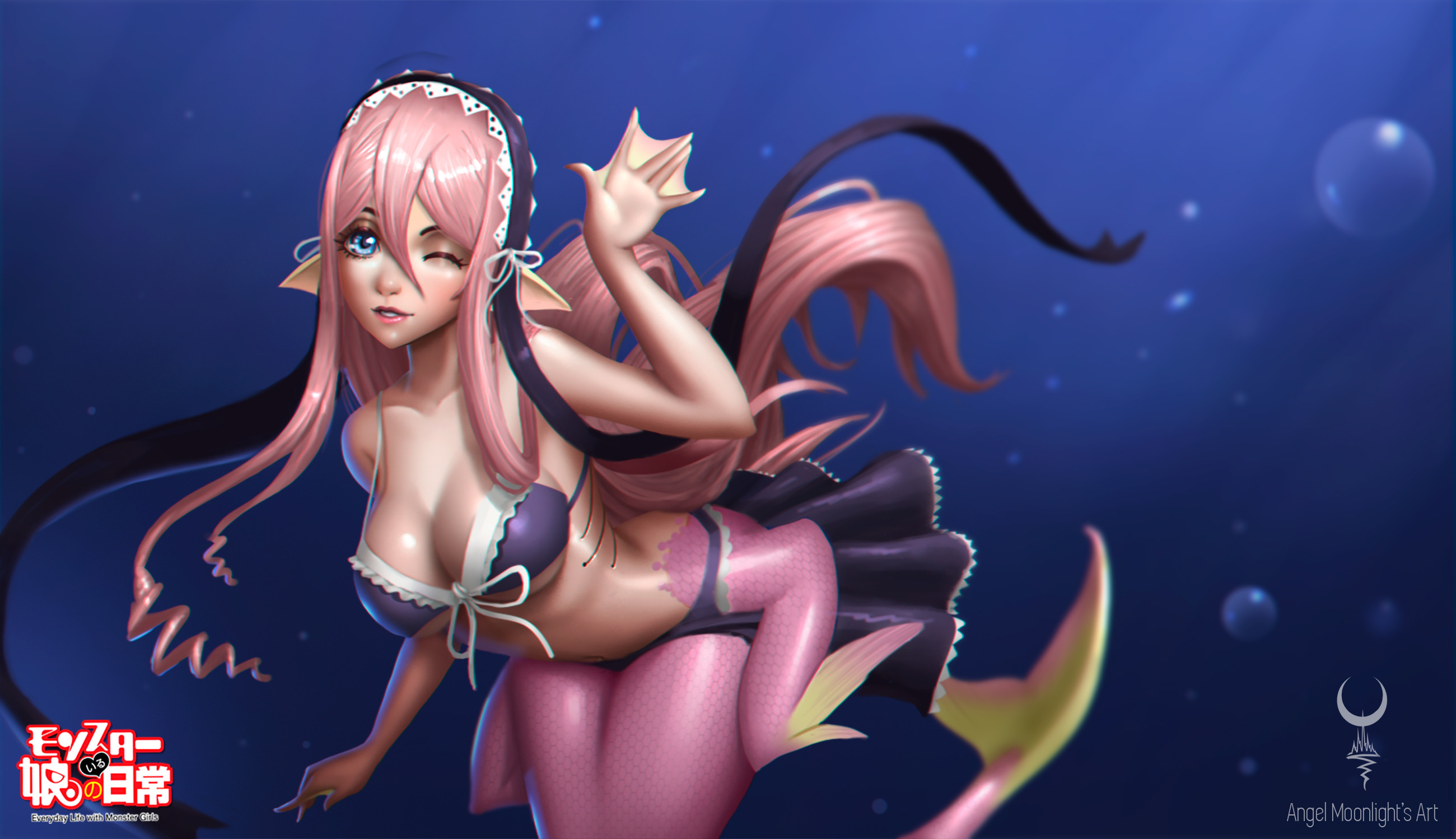 The main issue with this is if the mermaid is heavy. If they are light and flexible enough, skillful manipulation of these appendages might make them more able on land than seals. Trying to scoot on the floor is pretty painful,but a mermaid's tail should be tough enough to endure this (though long-term travel over hard ground, they may get chafed bloody). Rolling and springing up with a large jump also seem plausible short distance movement.

EDIT: Forgot to mention inch-worming. If the mermaid is quite flexible, then this may be a possibility for small movements and adjustments, as well as assistance in the crawl/shuffle.

Mermaids may need to bring salt water and sponges with them when on land, to dose themselves with. Unless they can convert to fresh water creatures quickly, then freshwater would likely be unpleasant to them. However, they could probably bring enough salt around to make fresh water usable for a sponge bath. Drysuits filled with saltwater may also become popular.

Human forms of transport, carriages and cars would work fine for mermaids if they can arrange them. Some sort of mermaid-bicycle using the hands or tail would be interesting to see... though wheel chairs may be the norm.

My question is to do with how to make the locomotion and daily life of mermaids on land plausible and feasible. Notably, you can expect they'll spend a lot of their time in the sea, even with their coastal villages/towns (pilgrims will have more trouble).

I also put some thought into mermaid land combat, but I'll save that for another day.

I would look at sea lions and elephant seals movement as their lower bodies are fairly similar to what a mermaid's would be, and they are sea mammals that spend a considerable lot of time on land. They sort of hop and scuffle with the lower body using their hands/ fins for assistance. I don't think weight would be a problem; an elephant seal weighs a lot more than a human and they navigate very well on land for a sea creature. If they need to visit land cites I could see them using some sort of rickshaw pulled by land creatures, perhaps humans or Dwarfs - this would make it easier for them to move about among land-dwellers .

As for combat, I could see them fighting in groups of threes with Spears. Why Spears? Because humans' better manoeuverability on land would make short work of any mermaid warrior. If they're going to have a chance fighting against land animals on land, then they're going to need a weapon that will allow them to take out their opponent before they can get close to them. A bow and arrow would be perfect, but it can only be used on land whereas a spear can be used on land and in water. Using their tail as a weapon would be useful in water but not very practical on land.

You need to look at real modes of movement for creatures that can do both land and sea. There aren't many creatures competent at both.

Mudskippers and seals aren't super graceful in the land. Sea snakes can't actually move on the land much either. Crocodiles and Hippos are better off, but four legged and I don't think that is what you are going for.

To preserve the ability to use hands, I think a snake form is what you want. Pythons, for example, are strong swimmers. Tonle Sap, a seasonally flooded lake in Cambodia, is swarming with swimming snakes in the wet season, so much that the locals 'fish' for them.

Assuming your mermaids are legless, classic half-human with a fish tail, their towns could be built with many pools and canals. They could also place aids (stuff like handrails and climbing bolts) everywhere, for arm-assisted movement.

If they have very strong arms, they could be able to balance their entire bodies on their arms - I've seen images of exceptional animal amputees (dogs, goats, pigs) that are able to balance on their front legs this way. If the mermaids have long, heavy tails, they would probably have to curl them up over their bodies, with tail fins pointing forward (somewhat like a scorpion's tail).

For long travels, they would surely use some form of vehicle. Chariots mounted with large tub-like water vessels are the obvious choice. I can also picture a mermaid "riding" a tamed giant hermit crab, her tail resting over the giant shell. 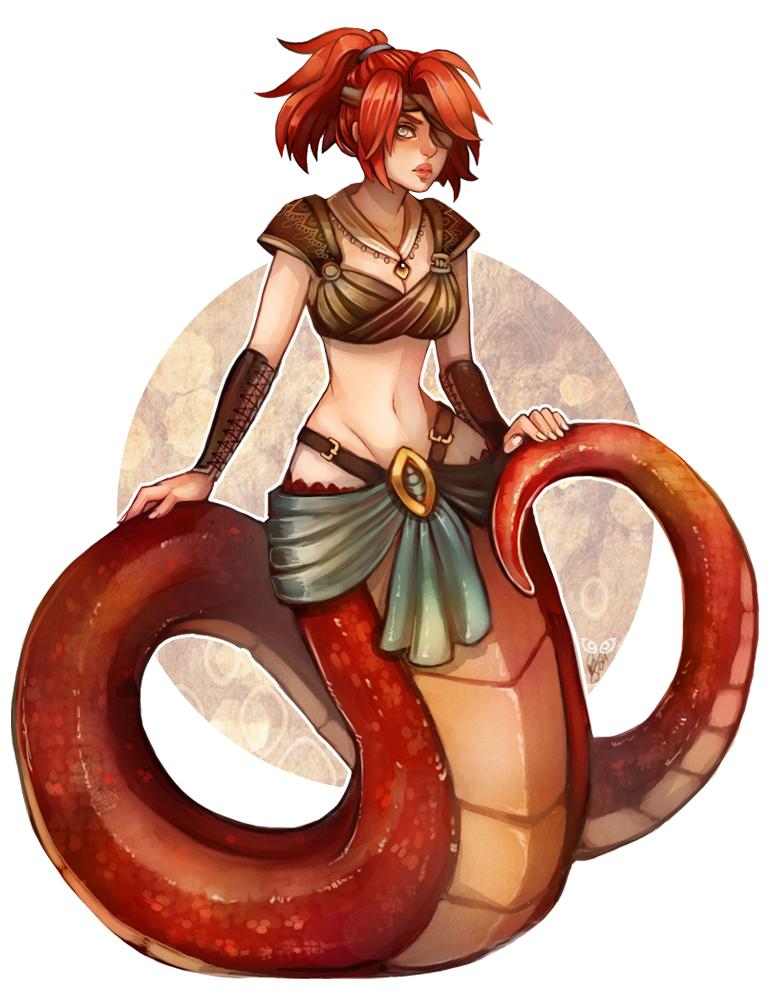 If the mermaid is able to slither on land just like the naga, she should have no problem going around on most surfaces. Might be slow, and might need constant hydration though.

If the fish side of the mermaid is more related to eels than whatever it is that Disney's Ariel is, then this becomes even more feasible.

What about having them stand tall, and take small steps on a T-shaped tail, like you'd move around if your ankles were loosely bound together? They'd look a bit like a wobbling penguin but still be very graceful once back in the water.

It depends on how the spine of your merfolk normally bends. Does it move from side-to-side (like a fish), or up-and-down (like a dolphin)?

Most merfolk are depicted with up-and-down motion, and these will be easier. Seals can crawl on the land using their bodies to propel them, but if you want your merpeople to be more agile on land, look at sea lions. A sea lion can use its tail almost as a third leg, and unlike seals they can actually gallop this way, attaining speeds comparable to humans (at least over short distances). They can do this because they have the ability to control their back flippers independently, using them as "feet".

Merfolk running like sea lions might be funny-looking, but it would allow them to keep pace with human companions. Of course, they wouldn't be able to run fast and attack with weapons at the same time, so they probably wouldn't be as effective in land combat overall. They could work as archers though, running into position and then firing from a standstill.

If the motion is side-to-side, your merfolk will be more limited in their land motion. They can move in a manner similar to snakes or Warcraft's Naga, with their torsos partially lifted off the ground. To keep their flippers out of the way, they could either lift up the end of their tail or fold them up. While this wouldn't be as fast as a galloping sea-lion merperson (even the fastest snakes are slower than a human running; belly crawling just isn't very effective for fast motion), they would be able to slither and attack at the same time.

Last night I saw a movie where a guy In wheelchair was trying to climb stairs. The scene was dramatic on purpose and the guy took almost two entire minutes climbing to the second floor.

Which is ridiculous considering the guy was an ex athlete and that any decent athlete can run in a handstand, do muscle ups and climbing without legs.

A trained human has arms stronger than the legs of an untrained person.

I actually tried climbing the stairs in my home using only my arms and dragging my legs as if they were paralized, it took me 6 seconds.

If anyone wants to see a demo, I can show how fast people can crawl on land by dragging their feet.

5
Would mermaids be able to sleep?
15
Mermaid Buoyancy: Oily Livers, Swim Bladders and Lungs
12
Mermaid Land (and Sea?) Combat
3
How do migratory mermaids work now?
5
Could Air-Breathing Mermaids Colonize Atlantis?
10
What would be the most comfortable position for mermaids and humans to engage in sexual relationships?
6
What would be an effective land based mode of transportation for mermaids?
4
Little Mermaids: Will They Survive?
8
Determining Feasible Mermaid Locomotion Methods (Land Edition)