Temperatures in an eccentric orbit?

We see plenty of seasonal variation on Earth, due to the large axial tilt, but the Earth follows an almost perfectly circular orbit, so we don't get much variation as a result of that.

What if we had a planet with similar axial tilt, similar conditions, etc., but in an eccentric orbit? What will that do to the climate, especially in terms of temperature variance? How much hotter/colder are the extremes going to be, and how much worse will things get when the two effects (eccentricity and axial tilt) combine forces to create even nastier extremes? For bonus points, what will temperature bands look like, given that an eccentric orbit will cause a specific latitude (somewhere between the tropic lines) to be very hot at perihelion, since the sun will be directly overhead on that line at the point of closest approach?

I'm hoping for answers with formulas that explain how one could calculate this, so that other people can build on the information and tweak it to suit their worlds. For the same reason, I'll offer a few sample orbits for people to use in providing examples.

Case A: eccentricity of 0.1, perihelion at the northern summer solstice.

Case B: eccentricity of 0.1, perihelion at the vernal (northern spring) equinox.

Case C: eccentricity of 0.2, perihelion at the northern summer solstice.

For the purposes of this question, assume that Earth is the planet following an eccentric orbit; it'll make things easier to understand. Answers that express temperature variance in proportion to what Earth faces are fine: if, for instance, case A is going to have a northern winter 20% colder than Earth would, that's pretty straightforward.

That's a difficult question to answer. Every formula, I don't explain is from Wikipedia. I'll try to answer your first question: How would an more eccentric orbit than earth influence the temperature on a planet which orbits around a star. However, since I still deem this to be a difficult question, let me make a few simplifications: (I will later discuss what happens if you don't make this)

How much power does reach the planet on every square meter? You have to calculate how much light reaches the planet.

Due to thermal conduction, the interior of the planet heats the surface and in the process cools itself down. The equation for the heat flow density is $q(\frac{\Delta T}{l}) = \lambda \, \frac{ \Delta T }{ l }$, where $\lambda$ is the specific thermal conductivity, $\Delta T$ the temperature difference, $l$ the length of the object (in our example the depth) and $q(\frac{\Delta T}{l})$ is the thermal conductivity as a function of the length and the temperature difference. Here I'm using 5., since the planet is smaller at a depth of $d$ than at the surface. For small $d$ this is negligible. The temperature at a depth $d$ only depends upon the temperature directly above and below. Therefore the energy flow at $d$ meters below surface can be calculated as $\frac{\mathrm{d}}{\mathrm{d}d}q(f(t,d))$. On the surface it is only half as much since noting is above the surface. Therefore, we get a power per square meter on the surface of $P_{flow} = \frac{1}{2}\frac{\mathrm{d}}{\mathrm{d}d}q(f(t,d))$.

Now let us assume, by magic the planet is suddenly on an circular orbit $2AE$ from the sun. That means that it gets only $\frac{1}{4}$ of the light. The planet will eventually cool down to about $203K$. However, that will take some time. How is it after say $180$ days? My calculation says, that up to 7 meters, everything is completely frozen, while below 8 meters the temperature is still about $288 K$. (Compare to permafrost where the ice never melts starting from a few meters below the surface)

This example tells us, that an eccentric orbit will only influence the surface temperature.

In the beginning I made a few assumptions.

So this problem basically has two parts. The answers so far have tried to answer the problems with evening heat out over the surface of the planet. I am working on a circulation model to do just that, but that is complicated and not ready. However, the other part of the problem is the question of insolation. How much solar energy is your planet really receiving? That I can answer with the approach I used here.

Zero time for this function is defined at perihelion.

Plot solar energy as a function of time

The second component is the seasons. Copying my work from that other problem I linked, I use insolation at 45 degrees north. Insolation as a percentage of maximum (maximum insolation of 1 unit being when the sun is directly overhead) is the cos(latitude - axial_tilt * sin(time)). Axial tilt is 23.5 degrees, same as earth.

Since this seasonal component is a percentage of maximum, we simply multiply it by the distance component to get total energy.

Here is the code that gives us some graphs:

And here are the graphs. Blue represents your planet's insolation, and Green represents the Earth, with the seasons aligned. 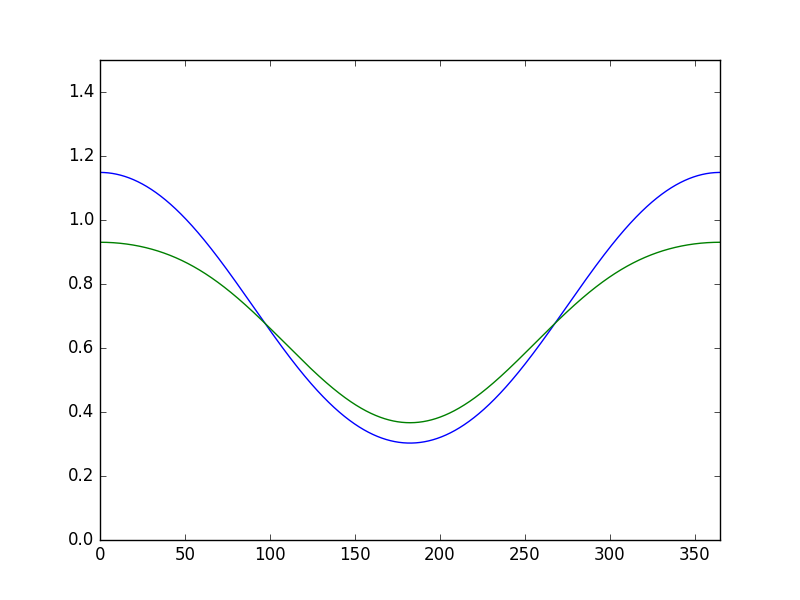 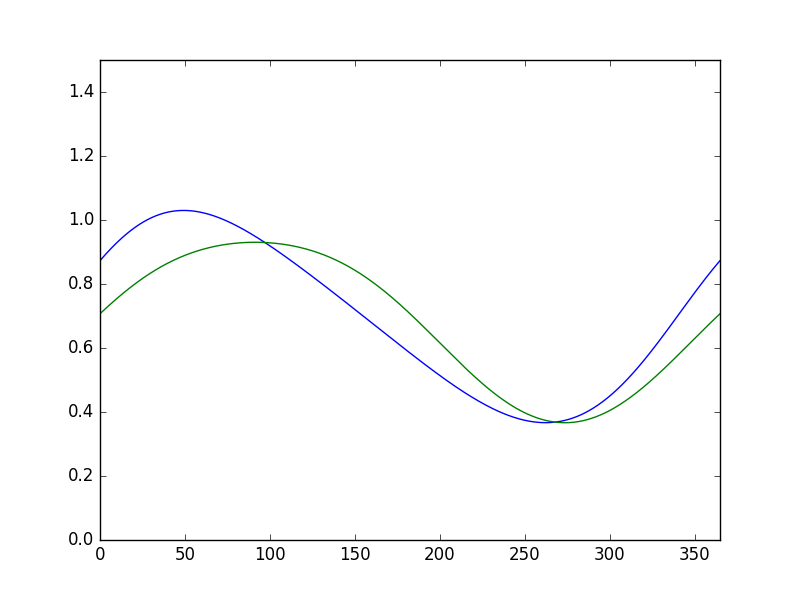 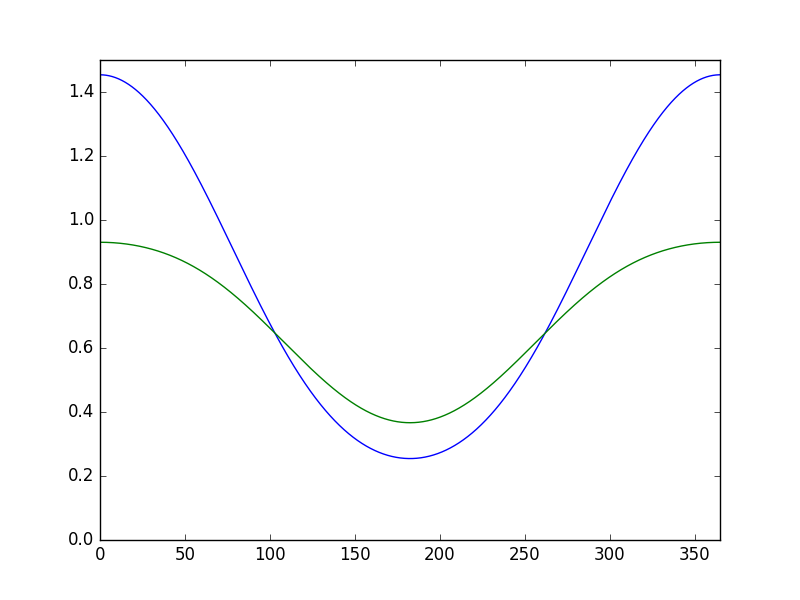 I added the python code so you can replicate or modify if you want. If you do use it, make sure you are in python3 and import from math and matplotlib:

While the seasons play a bigger role in insolation changes than the orbit does, the combination of summer at perihelion is significant: a 45% increase in solar energy. It is worthwhile pointing out that with Northern Hemisphere summer aligned with perihelion, the Northern Hemisphere on your planet gets significantly higher solar energy than the southern hemisphere. If the equinox is aligned to perihelion, then the seasons are equal in North and South.

If 1.00 is the amount of sunlight energy received in a year with the sun directly overhead at 1 AU, than on Earth 45 N gets 0.68 and the Equator gets 0.96 over the course of the year.

For your cases, the Northern hemisphere, equator, and southern Hemisphere get the following values:

You will also notice that you get more energy the more eccentric your orbit is. This is due to the sun's delivered energy increasing more for moving 10% inwards than for moving 10% outwards (inverse square law, and all).

As it's been a week without any answers offered, I think I'll share the results of my own further research here and see if people think it's close to the mark.

To get a basic temperature estimate for the planet, using the calculations for effective temperature seems like a good idea. The Wikipedia calculations, however, calculate it over the course of a year; to cover an eccentric orbit, I'm going to run the calculations based on perihelion and aphelion distances, compare those to the result at the mean distance, and see how big the gap is.

For anybody doing this themselves, units: L is in watts per square metre, D in metres. T is in degrees Kelvin (this is basically the Celsius scale, but 0 C is 273.15 K).

The basic formula doesn't account for the greenhouse effect, internal heating, etc.; it effectively assumes that the planet has no atmosphere, and produces a figure of about 255 K for temperature (-18 C), which is obviously far too low. For a simplistic approximation that lumps all of those extra factors into the greenhouse effect, emissivity can be altered: for the Earth, this results in an emissivity of about 0.612, mostly due to cloud cover. T then becomes around 288 K (15 C), a much more reasonable figure.

Now, to actually calculating some examples, where PT = T at perihelion, AT = T at aphelion:

If anybody can offer an answer covering how the extremes might be softened, that would be appreciated. Answers or comments covering how seasons might look different (what spring might turn into if perihelion is during spring instead of summer, for instance) are also welcome.

There's about an 20 W/m^2 difference in solar input when averaged over the curved surface and night/day but the effect of this goes largely unnoticed because perihelion aligns almost exactly with the N hemisphere winter solstice and its effect is conflated with the seasonal solar difference which when averaged over each hemisphere is about 280 W/m^2 in the N and 300 W/m^2 in the S. Notice the difference in seasonal variability in the S? In about 11K years, this will be reversed.

The planet behaves quite differently when perihelion is aligned with the N hemisphere summer because of the significant asymmetry between how the 2 hemispheres respond. This is evident in the ice core data which has local minimum and maximum temperature swings of about 2 degrees C that corresponds exactly to the periodicity of the precession of perihelion.

To put this in perspective, the solar energy increase that's equivalent to doubling atmospheric CO2 since pre-industrial times is only about 3.7 W/m^2.

Not the answer you're looking for? Browse other questions tagged science-based planets climate .

7
Season cycle that would occur on a habitable planet that orbits two suns?
4
Can a planet with 2/3 Orbital eccentricity sustain life?
7
The (Alternative) Reason for the Seasons: Highly Eccentric Orbit

7
What is the expected terrain for an arid highly eccentric Earth-like planet?
7
The (Alternative) Reason for the Seasons: Highly Eccentric Orbit
3
Sun/stars orbit and climate
5
Seasons without an axial tilt?
12
Would the tropic and arctic climate bands switch if the Earth's axial tilt changed to 60 degrees?
11
Weather with extreme seasons
2
Are these traits for my planet mathematically accurate? Could it support life?
1
The Orbit Of Cryomoreth
3
Life on a planet with little axial tilt