Can we make rain on Mars?

Farmers use dry ice(CO2) to seed the cloud on Earth, can we do the same for Mars? The acidity doesn't matter it can be any element or compound as long as we can recognize it as precipitation, as usual ban magic and FTL tech. (Actually I'm trying to do a selfie there with a rainbow in the background.)

Cloud seeding cannot make it rain if the air isn't already saturated with water vapor. Rain requires a tiny, tiny, tiny nuclei for the water dissolved in the air to condense around. This can be dust or tiny particles of ice. Cloud seeding artificially introduces those tiny nuclei into humid air to make the water fall out of solution.

For a dramatic demonstration, drop Mentos into Diet Coke. The Mentos contains many nucleation sites (microscopic nooks and cranies on the shell) and causes the supersaturated carbon dioxide in the water to rapidly exit the water. But if you drop another Mentos in nothing happens. The soda is flat. There's not enough dissolved CO2 left.

The Martian atmosphere is too thin, too cold, and made of the wrong stuff.

The atmosphere of Mars is very thin. The average pressure is 0.006 bars (1 bar is the average Earth atmosphere). Best we can get is 0.011 bars in the depths of Hellas Planitia. Martian temperatures vary from 130 to 300 Kelvin (you'll see why I'm doing this in Kelvin in a moment). It's 96% carbon dioxide with 2% argon and 2% nitrogen.

At these temperatures and pressures, there's no dissolved liquids in the Martian atmosphere to make fall out of solution. They will immediately sublimate, convert from solid to gas. To understand why we need to look at some phase diagrams: the temperature and pressures at which various substances are solid, liquid, gas, or other. 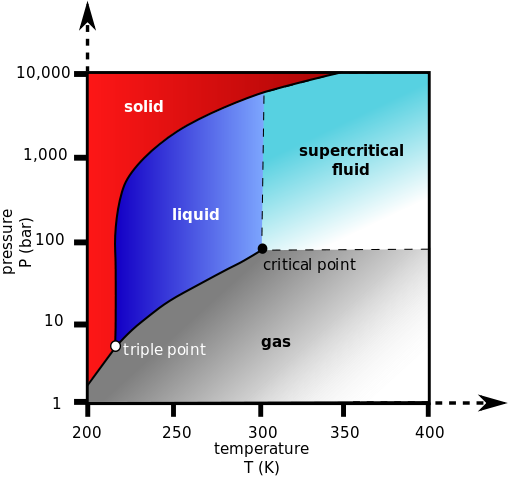 Martian pressure is so low it's off the bottom of the scale here. That means CO2 can never be a liquid. 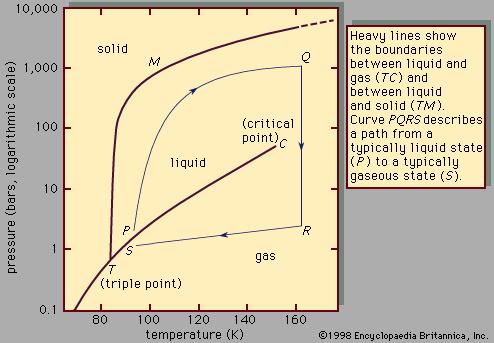 Argon is a noble gas and very difficult to liquefy. While Mars does get cold enough to make argon a liquid, again, the pressure is far too low.

(Sorry, this one is in Celsius). Again, the pressure on Mars is so low it's off the bottom of this graph. Nitrogen cannot be liquid at Martian pressures. It's also too warm on Mars for liquid nitrogen.

Liquids are pretty rare in the universe. Most substances have a relatively narrow temperature/pressure window in which they're liquid. They much prefer to be solid, gaseous, or plasma. You might be able to make it snow, but you won't be able to make it rain.

Divert a small comet so it impacts Mars. I’ve seen this idea used to make an atmosphere for the moon, and it ought to be applicable to Mars too.

Imagine that it rains quite a lot for a few years as things settle down.

The easiest way to get a rainbow though is inside a domed habitat. Perhaps it’s not a huge domed city, but just a domed park/garden attached to an underground habitat. Water is sprayed via irrigation and could be arranged to make nice rainbows viewed from a picnic area.

Not the answer you're looking for? Browse other questions tagged science-based climate weather mars or ask your own question.

10
Would it be possible to terraform the moon?

4
What species, if any, would survive this kind of apocalypse, and what would global environment be like?
4
How to make glowing rain/mist?
12
How to make it rain men properly?
5
Self-sustaining Mars colonization
43
Electricity free spaceship
5
Logical Location for my Secure Martian Datacenter
14
Mass extinction because of too low CO2-levels
2
Turning iron that is unusable by magic civilizations into an alloy usable by them
5
How to build a wormhole for FTL communication? [more Engineering than Physics question]
14
How can water magic destroy the world?