Where on a tidally locked planet with a 25 °C maximum is the 0 °C isotherm?

I am writing a novel. In that novel, humans have settled a tidally locked planet. That planet is positioned at just such a distance from its sun that the sun heats the planet to an average of 25 °C at the substellar point, that is, at the center of the side facing the sun. The planet is like our Earth in size, composition, and atmosphere. As that planet is tidally locked, the permanently dark side is much colder than the side that is in perpetual daylight, perhaps even freezing, with the coldest point on the opposite side of the substellar point.

How far around the planet from the substellar point is the 0 °C isotherm?

Looking at average temperatures on Earth, either for a specific month or the whole year, the distance between a place with 25 °C and a place with 0 °C always seems to be somewhere around 40° to 50° (e.g. from Mexico to Northern Canada in July). So I would suspect the 0 °C isotherm to be about 45° from the substellar point. 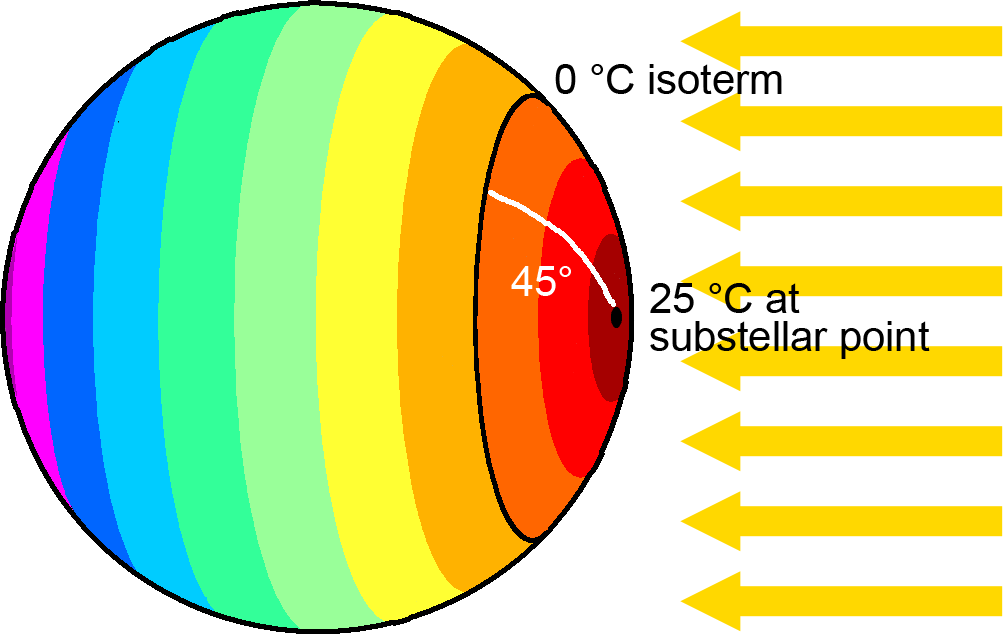 A very similar derivation of $(1)$ equation can be found here, although that $\theta$ is latitude, not the same as our $\theta$, and so $\sin\theta$ should be replaced by $\cos\theta$, leading to the above formula. A related equation is given such that the change in temperature from the greenhouse effects can be added in. I think we can do the same thing here: $$T_s=\left(\frac{\epsilon_5}{\epsilon_2}\right)^{\frac{1}{4}}\left(\frac{R_*}{a}\right)^{\frac{1}{2}}T_*\cos^{\frac{1}{4}}\theta+\Delta T_s\tag{3}$$ where we can compute $\Delta T_s$ assuming that it comes from radiative forcing: $$\Delta T_s=\lambda\Delta F$$ given the climate sensitivity $\lambda$ and radiative forcing $\Delta F$. I wrote about this in a lot more depth in this answer. To accurately calculate both $\lambda$ and $\Delta F$, we need to know a lot more about the planet, its atmosphere, and its crustal composition. Drawing from my previous answer, if we knew the concentrations of various greenhouse gases, we could use a table from the IPCC Second Assessment Report to calculate the relevant $\Delta F$s. However, that would require a lot of guesswork on my part.

The greenhouse eﬀect for tidally locked planets is much smaller than those for non-tidally locked planets (Fig.2d). This results from a low-level temperature inversion on the nightside of tidally-locked planets (see also Joshi et al. 1997; Leconte et al. 2013). The inversion is due to eﬃcient radiative cooling by the surface on the nightside and strong atmospheric energy transport from the dayside to the nightside (Merlis & Schneider 2010). The outgoing infrared radiation to space is therefore similar to the near-surface upward infrared radiation, resulting in a small $G$.

Here, $G$ is a parameter - a temperature difference - between the upward infrared fluxes at the planet's surface and at the top of its atmosphere; it's essentially $\Delta T_s$. The difference in how important $G$ is is shown in the author's Fig. 2: 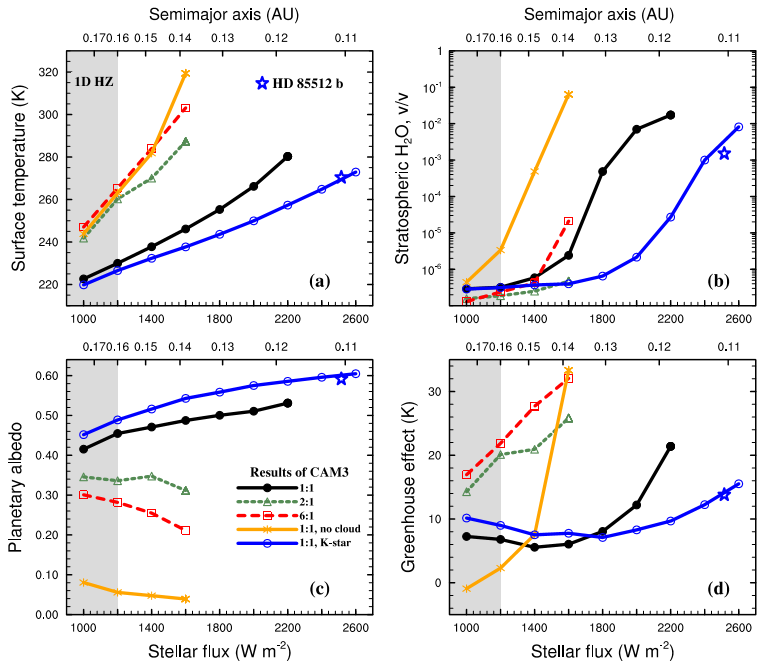 Perhaps, then, at most stellar fluxes, we can neglect the greenhouse effect on our tidally locked planet.

Take this answer (v1) with a grain of salt. It's only a really, really basic approximation.

As of right now, this is a partial solution

I set up a solution using a non-linear, non-separable first order differential equation. I ran out of brainpower midway through this post, and can't solve that right now, but I will revisit it later. If someone else can solve first, please edit this post. I wanted to post what I had, in case anyone can find errors now, and to re-type my notes more legibly.

Assume that heated air rises at the sub-stellar point and proceeds at high altitude equivalent to Earth's stratosphere towards the poles, where it enters the 'dark side', a cool, infinite heat sink and heat source. Cool air from the 'dark side' returns in the surface layer equivalent to our troposphere. It moves towards the sub-stellar spot, heating up along the way as it absorbs solar radiation.

We will calculate the energy balance of this surface layer of the atmosphere to calculate a delta-T as a function of angular distance from the sub-stellar spot. The angular distance where delta-T = -25 is the answer to the question.

Data on radiation and atmopsheric circulation taken from here. This reference will be referred to as Fig. X of data.

No land-sea interface; that is, the planet is either all land or all ocean. No heat transport from ocean circulation.

Insolation at the sub-stellar point is equivalent to earth's equator.

The 'dark side' is an infinite, constant low temperature heat source for returning winds.

Ignore effects of expansion and contraction of air when approaching and departing sub-stellar point.

From figure 1.3 of data, 0.67 of energy absorption is from surface, 0.33 by atmosphere, of which 0.25 is lower layer (by above definition) and 0.08 by upper layer. We will simplify that all absorption is in lower layer.

Assume solar energy absorption and radiation to space are the dominant means of energy transfer. Ignore heat transfer between upper and lower layers.

Simplifying Fig 1.7 of data, Outgoing radiation is 250 W/m^2*month at 0 from substellar, since temperatures are similar to earth's at the equator. By Stefan Boltzmann law, radiative heat transfer is proportional to the fourth power of Temperature. Temperatures must be calculated in Kelvin.

where $T$ is temperature in Kelvin.

We will model the expected strong, constant winds at 10 m/s and 20 m/s.

After attempting to solve numerically using an Euler method, I discovered that this does not work. My problem is ignoring the potential energy imparted to air molecules to raise them from the lower atmosphere to the upper atmosphere. This takes something like 5e8 W at the 10 m/s flow I calculated and needs to be accounted for. Still working.

I'll try a simple answer. I didn't see the call for hard-science facts, so i thought i can give it a try. I didn't do a master in physics, and i do neither have the time nor the possibility to program a weather simulation that would most certainly be required to give you a correct answer. Let me say this right away: this answer is not really hard-science, but i tried my best.

I will try to answer your question by following these steps.:

How is temperature distributed on a tidal-locked planet? Do we have real life examples?

Let's start by looking into planet that is close to ours: mercury. Mercury has almost no atmosphere, and the temperatures there range from 100K to 700K, while the poles are constantly <180K. Mercury has almost no axial tilt, and it is actually almost tidally locked. So Mercury gives us a good representation of how the temperature would distribute on our planet without an atmosphere. Mercury is smaller than earth, but since you haven't specified a size for your planet, we will ignore size completely.

How would your planet behave if it had no atmosphere? We could just put in your maximum temperature of 295K as a max, and downscale everything in relation to that. We would have a maximum of (logically) 295K with a minimum of 42K, and the poles would be at roughly <74K. Brrr.. that's fresh. Given that pluto has a mean temperature of 44K, a temperature where most gases just instantly freeze, our planet would be really really cold on the dark side.

How does having an atmosphere influence temperature distribution?

I googled a bit and found this document: Document

The document i linked suggests that if the temperature drops too low, the gases in the air freeze, leaving a vaccum. The low preassure causes the air from the warm side to expand, spread to the cold side, and freeze, too. So the planet wouldn't have any atmosphere. To avoid this, we require strong winds that help spreading the temperature so much, that the gases on the cold side can't freeze.

But there are no formulas available to me to estimate how EXACTLY the temperature would behave. That depends on the strenghts of the winds, geological and climating conditions, the exact distance from the sun, gravity, magnetic fields, the evolution of the planet etc.. But i know that the temperatures need to be high enough so our gases don't freeze, even on the dark side.

Which temperatures are required for a planet to carry life?

Our atmopshere is primarily composed of Oxygen, Nitrogen and Carbon dioxide. The freezing point of these are:

All of these should constantly exist as a gas, otherwise we might suffer from atmosphere drain (or life would change very VERY drastically), especially considering that Co2 is a primary catalyst of greenhousing and thus: warmth. We need that stuff in our atmosphere, if we want it to be able to keep our temperatures more civil.

Okay, so 195K seems like a good temperature to set as a minimum. Let's notch it up to 200K, just to be sure, and to allow fantastic "carbon dioxide rain" on especially cold nights on the dark side....just to be sure, 200K is still -73C, and thus VERY cold. This is the temperature we require at least on our dark side. It might be higher on your planet, thus changing all the results of my calculations. I dare say: your question doesn't have a definitive solution.

Where is our isotherm point?

I think it is safe to say we now have our three points of temperature we require for our calculations:

Minimum: 200K (as calculated above)

Temperature at poles: <212K (as calculated from situation on mercury)

Now, for the calculations. If the temperature was distributed "evenly", it would drop from 295(substellar point) to 212 (poles) evenly. It probably doesn't, but as i said, the strength of the winds, the unknown geology and other factors make it impossible for me to give a precise estimation. If the substellar point is at latitude 0, and the poles are at latitude 90, and we have above temperatures, our point of 0 degrees Celsius would be at a latitude of:

Just to add to the answers that are here:

I'm surprised that no one referred to this question.

Based on the above mentioned answer about atmospheric winds due to heating, it looks like there may be super-rotation, perhaps like a sub-stellar vortex. Lots of storms and a good deal of heat transfer. This suggests a quite active weather system, interesting perpetual winds and possibly a bit larger +0°C region.

I cannot comment on how much larger the +0°C region may be, but it seems as though, with a large area of the planet cold enough to collect ice over millions of years, that most of the water on the surface would be trapped and the result would be very dry air circulation and perhaps desert like conditions around the sub-stellar point and more likely some rain at lower sub-stellar-latitudes. I could foresee large circulating dust storms up to very near the sub-stellar point.

48
How would winds behave on a tidally locked planet?
16
How far could a planet be from its star and still be kept habitable by intense greenhouse gases?