I am writing a story that takes place in the sci-fi 50's with vintage ray guns. After watching several old sci-fi movies I have observed several effects of old ray guns when fired which I will list below 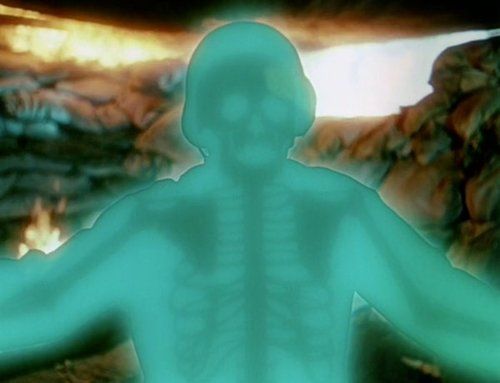 When Ray gun is mentioned , I mean any energy weapon, this includes

There may be more that aren't listed, but if any of these listed could provide the effects pictured above then use that as the definition and or one that hasn't been listed

The problems with actually achieving this effect with a real-science weapon are many. Some obvious points are that the density of gas is about thousandth of a solid, so a man would vaporize into a rapidly expanding cloud of man-gas, as opposed to just dissapearing. Also, any beam weapon carrying enough energy to vaporize a human (MJ at least, maybe GJ) would both ionize the air causing an expanding plasma ball and bore a hole right through the person in miliseconds, depositing the rest of its energy somewhere behind them.

I can think of no scientific basis for this answer but perhaps the "Ray" simply interacts with the large amounts of calcium in bones in the same way microwaves interact with water in a microwave oven.

Vibrating water molecules increases the heat of the substance (mmmm pizza bites); in your ray guns the weapons produce the same effect on a weaponized scale. The glowing bones aren't the effect of X-rays, the glowing bones are literally super heated material. This effect puts off a large amount of heat which vaporizes the target from the inside out.

It varies from work to work but the after effect is often a skeleton, so what we are seeing may not be x-ray so mush as all the non solid matter being vaporized. As the mostly water flesh quickly becomes a more transparent (possibly somewhat glowing) gas, the solid skeleton could be viable.