This is an answer I found while looking up random factoids. And it's gotten me wondering.
((If I should take down the picture, and just paraphrase the text, please let me know.)) 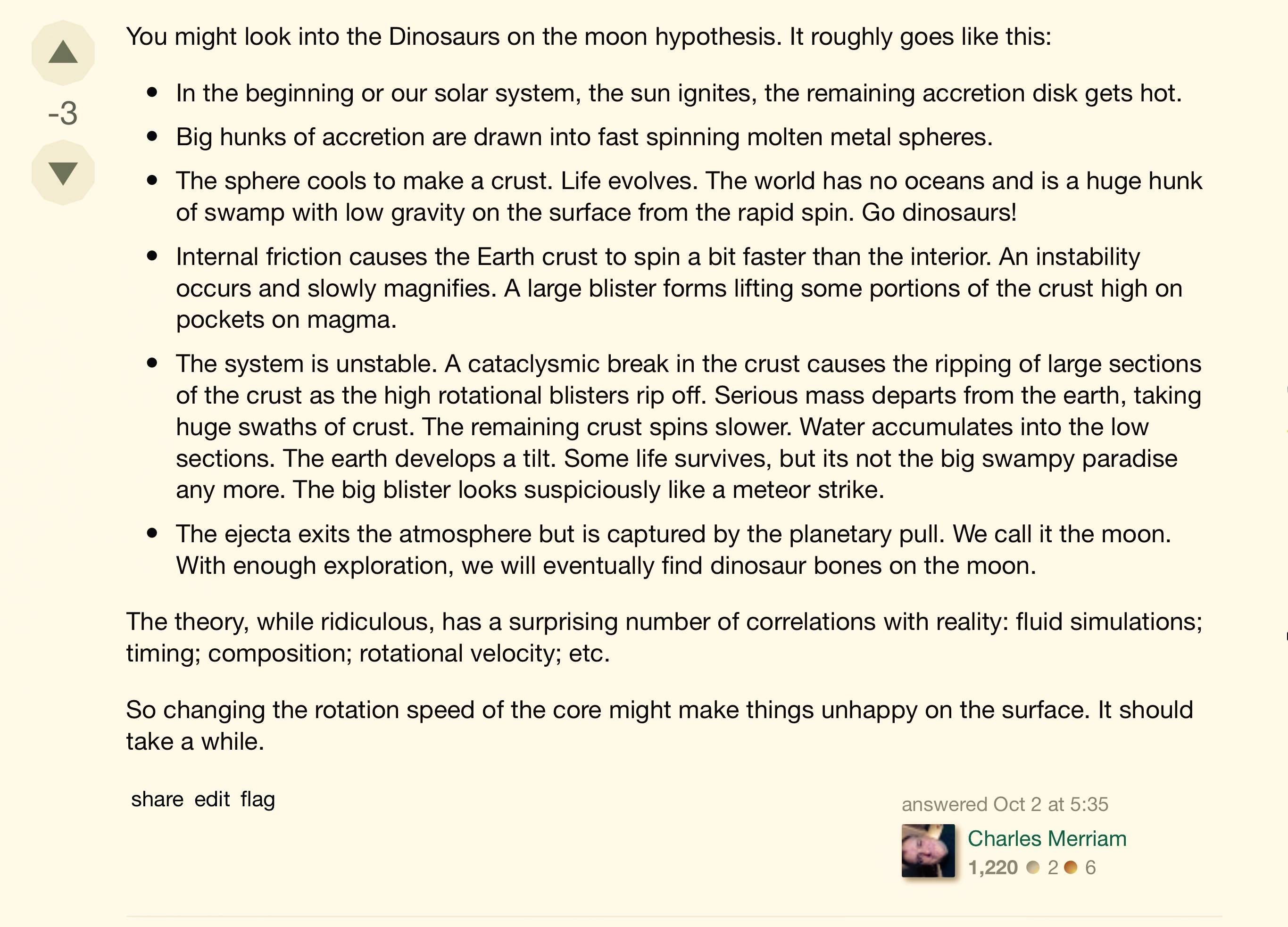 Charlie here is right, in that this is a fairly ridiculous theory. However, the sheer ridiculousness of the concept reminded me of something that, while not quite as absurd as dinosaur fossils on Luna, is very similar in some aspects: Panspermia.

For those who need reminding, Panspermia is the concept that tiny and simplistic microbial life forms can be 'ejected' from their homeworlds by way of impact ejecta, hitch-hike on these wayward meteoroids, and then spread to other worlds when their host meteor impacts another planetary body. Scientific experimentation on this theory (as of this date) has proven a bit iffy, but it's still a popular idea in sci-fi stories and video games.
That being said, let's look back at the lunacy (nyuk-nyuk) of the Dinosaurs on the Moon idea. Suppose an incident similar to this happened earlier on in this planets history - say, when only microbial life forms exist on the surface. As several documentaries have claimed, there are potential places where life forms can survive extreme heat, even in nigh-apocalyptic conditions.

Could a "Rapid Centrifugal Disintegration" event similar to this result in a planet and a moon with life forms derived from the same common ancestors? How could life survive it? Assuming they don't, could fossils of these microbial survivors even be found/survive to the civilized age?

No. The rapid centrifugal stuff is nonsense.

There are ways to blast rock off a planet though, including an incoming impact. We have found rocks that came from other bodies and fallen to Earth, so it happens!

See the extended quote I included in this answer for current thoughts on how could life survive it.

Not the answer you're looking for? Browse other questions tagged reality-check planets space moons orbital-mechanics or ask your own question.

9
Is it statistically likely and physically possible to have two civilizations in the same star system?

18
What kind of event, if any, would knock the moon off its orbit, without destroying it?
7
Seasons/Months on a Habitable Gas Giant Moon
3
What are the required proportions of a moon that allow it to orbit around a planet?
13
Moon occasionally appears much larger in the sky
0
Earth-like planet the size of Callisto with Io-like moon. Plausible?
5
The other side of the moon!
3
Lunar cycles for a two moon planet (one of which is smaller and orbits the first moon)
6
Geostationary moon
1
Is this planet-moon system possible?