Humans as batteries; how useful would they be?

If you were to hook up a human being to a sort of syringe sized water wheel to generate power using the force of their blood flow; how much power could they generate?

Consider a human in a medically induced coma on a steady drip of some kind of stimulant like adrenaline to speed up their heart rate and blood flow. Would this produce more power if the physical condition of the person didn't matter like permanent organ damage as a result of the process?

Nope. Not very useful in the way you proposed.

Just imagine using a tank on a treadmill as a battery to fuel a ship: you'll lose a lot of power, unless you have a zero-cost source of tanks and fuel for them.

Any animal (including a human) needs a power for his systems to be alive and running, so making a living organism into battery by using one of his organs (blood flow / muscle power / etc) is very ineffective, because a lot of energy is spent supporting all of the co-operating systems, UNLESS you have cheap means of producing fuel for his "reactor" - like some magical device, that can produce food from nothing, OR (e.g.) you belong to a race of aliens, that consumes photons and defecates proteins, fats and carbohydrates.

P.S.: There actually is in human history an example of "food producing magical device", used to power working horses/bulls/donkeys - it's called "earth". Basically fuel for these animals (grass) grows by itself and in some cases (summer-autumn) the human has to spend nearly zero energy to power these animals: just walking them throughout a field works fine - they eat the grass by themselves.

This dude estimates the work done by the human heart as 0.5 J/beat. Assuming a resting heart rate of 60 beats / min, that gives us 0.5W of power, or 43.2 kJ per day. Assuming a 115 lb person sleeping burns 42 Calories (which are kilocalories) / hour, that means you need to ingest about 1008 kilocalories a day to be an unconscious blood pump, or 4.2 MJ.

Even if you developed some mechanism for speeding up the heart, you would still have to increase the amount you fed this person, and the efficiency wouldn't change much, if at all.

I long ago designed exercise bike controllers.
Figures below are from memory and 'less than exact' but should give ballpark ideas.

Use a (conceptual) bike!

Rather than trying to harness blood flow and heart-pump which are not optimised for energy output, use a portion of the body which is - ie leg muscles with suitable electrical control signals for leg activation driving an alternator or equivalent. The "user" could be in any suitable position - on their back with legs bent to drive pedal mechanism would work well enough (bicycle position rotated backwards about 120 degrees. Or a "recumbent" posture. Many ideas here.

Various ideas of how maximal energy can be extracted over longer periods.
Note attitude of rear rider in tandem configuration. 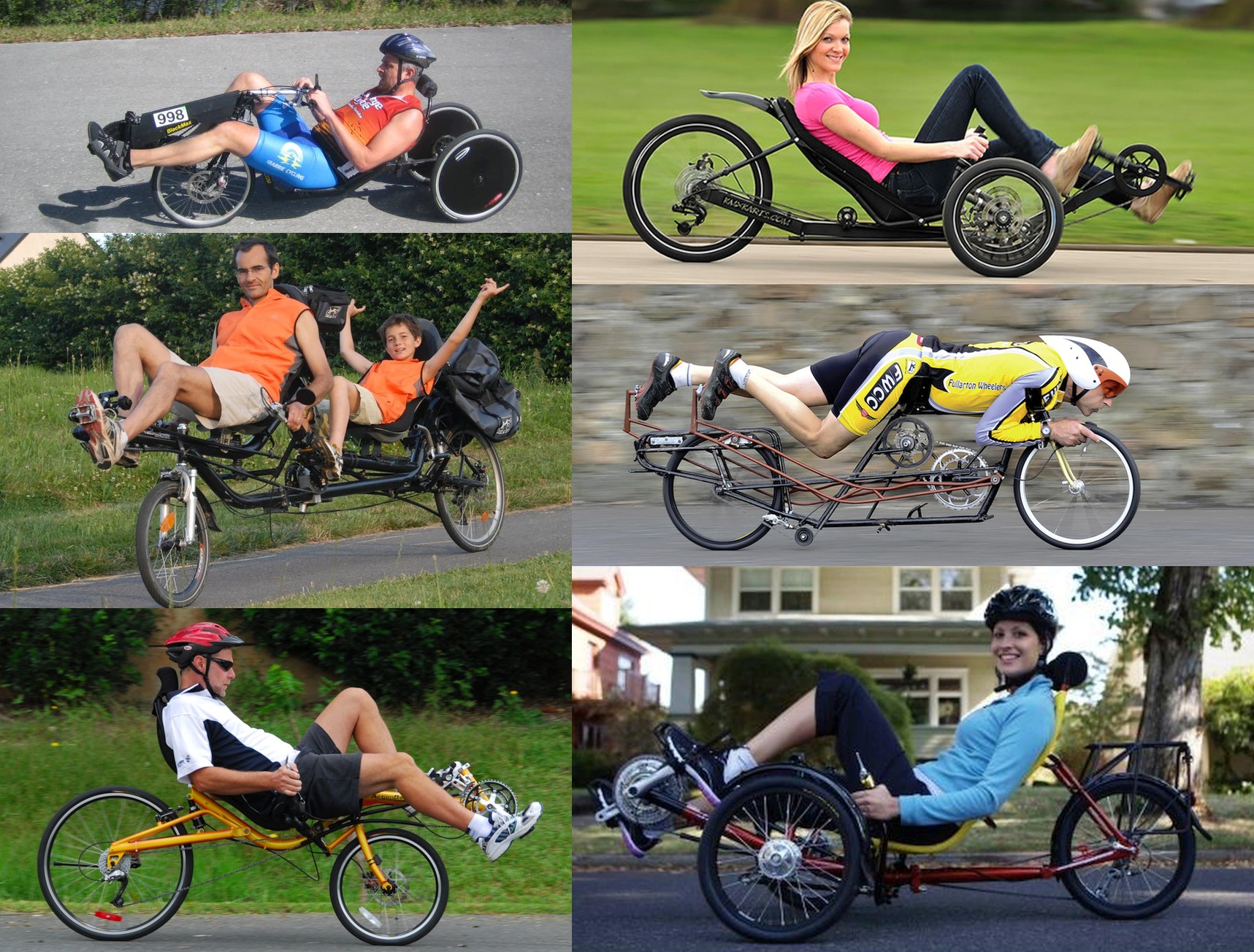 If you can extract 10% of total energy from user that's ~=1/4 kWh or 6c of electricity equivalent./day. More food = more energy and probably a greater % out but still small.

I could maybe do 100 Watts for an hour and be "rather tired".
Once I could do 500 Watts for about 10 seconds and then needed a good lie down :-).
To fly the English Channel under your own power takes 300-500 Watts for as long as it takes.

That makes the mechanical output about say 15-20% efficient.
Not bad.

On the level on a bicycle I'd expect 50 Watts continuous to give me say 4 to 5 kilometres per hour so that would take me about 60 to 75 km in a day :-)
Any hills would greatly reduce that.

Despite what people say here, I've long been impressed at how much work you can get from a human body on a kg or so of semi random carbohydrates. If you used solar heated ponds to grow "** Cyano-bacteria aka blue- green algae aka 'pond scum"** you may [tm] be able to run the energy production system on the output. Each person-unit is only running at 100 Watts say but 24 hours / day so that's equivalent to eg a solar panel's 4hrs mean sun/day year round in most areas. So a 100W person gives the same daily energy as a 600 Watt PV panel which has an area of about 4 square meters at current module delivered efficiencies of say 15%. A panel does not need algal fuel - but a person unit can probably fit in one square meter and can be stacked N high, unlike panels which must "see" the sun directly. Persons have to be plumbed (algal matter and water in, waste products out). The algal ponds take extra area - probably in excess of the PV panel area needs.

Overall it may depend on available resources - but PV panels sound like an easier task :-).

Unfortunately, there’s no exact way to perfectly describe the energy output of your imaginary blood-dam, but this equation easily suffices:

The average density of blood is approximately 1060 grams per meter cubed, and we'll go ahead and assume that your blood-dam is 100% efficient for simplicity.

Since we want to maximize your energy output, we’ll draw from the biggest vessels in the human body, which clock in with a blood flow of .4 meters per second and a volume of .0004 meters cubed per second.

Crunching all these numbers, you get about 33 milliwatts. Needless to say, this isn’t very much. This could power, say, a laser pointer, or a hearing aid. If you gave the person a stimulate like you're suggesting, you still wouldn't be able to break one tenth of a single watt.

Honestly, you’d be better off just burning the body and harvesting its bioenergy.

Incredibly little. Likely a net power drain when you consider the power required to maintain the set-up.

You could get more net power by just hanging a bag of water and putting your "syringe-sized water wheel" on its outflow. Even this would not give you a positive energy source, as you would have to use energy to refill the bag when it runs dry.

It's not very effective.

If you think for a moment about what an organism does and what it consists of, you'll notice that it has a large variety of organs that help it to function in various ways. You have a heart to pump blood, you have a whole system to convert food for energy(and other useful things). You have a brain (he's the killer, uses muuuuuch energy). The list goes on and on. You also have to maintain the proper temperature, stuff like that.

Now imagine a simple pump. It has a... pump. Maybe some engine, some things to make it work better. You don't need to do anything like maintaining temperature, digesting, getting rid of the waste or powering the organs you don't need. Human can also be bigger and harder to maintain(and maybe even replace) then a mechanical pump.

So no, you don't use humans for such things. Look at how we use animals; nowadays it's mostly for food. However, since we are now getting further in technological advance, and we are able to grow meat in the laboratory, soon(probably less than a hundred years or so) we won't need them for that, as we will be able to create the meat much cheaper - we won't need to clean, grow, feed and care for the animals and we won't need cages and place for them to live; we will simply grow meat, the only thing we want.

So yeah, unless machines want to use our brain for thinking hoping for some clever ideas or just like our meat and can't get it any other way, we're mostly useless.

What about heat energy? I don't have good source at hand right now, but I've heard several times that the body generates about 100W od heat energy. Now you only need some good device to transfer that to electricity. You could try something like Peltier generator or some other Thermoelectric generator. Trouble is that the efficiency is (according the wiki article) 5–8% But maybe that can be improved. And of course you still need to feed that body...

You can also combine this solution with the others.

3
How would an aquatic race of humanoids move as flawlessly as humans do on land?
1
What adaptions would humans obtain if they lived on Mars?
9
Would a base on the moon (military or otherwise) actually prove useful?
5
Would there be anything preventing a world where humans get energy by photosynthesis?
8
Would a magic-using society create living batteries?