I want to have a star cluster of main-sequence stars (yellow dwarfs [like our sun], orange, and red dwarfs) that are on a distance of 1-2 light years between each other, so interstellar travel is possible even with sub light speed. The cluster should be far enough from e galaxy core, beside that I don't care is it open or globular as long as it's stable, and there's a planets where life could form.

How to keep the cluster stable, since from what I read open clusters are very loosely bound by gravity? Globular cluster on the other hand are usually very old though there are exceptions like NGC 1818

How about having intermediate-mass black hole in the center of the cluster which the stars orbit like Messier 15 see video ? Would it help or it makes more problems then it solves since I want habitable planets on the stars?

Would having all the star to be orange or even red dwarfs help with keeping them closer together?

It seems that my setting though very cool, seems unstable. To finish on a positive note here's a link to NGC 6101 cluster with hundreds of black holes, if life ever evolves there their astronomers will know quite a lot about them.

Let’s determine some basic parameters of the cluster.

You say you want the stars to be 1-2 light-years apart. This is a little tricky because star clusters don’t necessarily have uniform densities. Globular clusters, for instance, have radial density profiles decreasing from some core density at $R=0$ to zero density somewhere further out. There are several density profiles used to model this. The Plummer model is easily the simplest, as analytic expressions exist for density and potential. The King model (see King (1966), the third in a series of papers) is more accurate, though the density must be solved for numerically, and the Michie model can be even more accurate (see e.g. this thesis), as it can account for dark matter.

I’m going to follow a modified version of the models of Bonatto & Bica (2014), who use a King profile (here applicable to open clusters). The fraction of the total number of stars $N$ within a radius $R$ is given by $$n(R)=\frac{x^2-4u\left(\sqrt{1-x^2}-1\right)+u^2\ln\left(1+x^2\right)}{u^2\ln u^2-(u-1)(3u-1)}\tag{1}$$ where $$x\equiv R/R_c,\quad u\equiv\sqrt{1+\left(R_t/R_c\right)^2}$$ with $R_t$ and $R_c$ being the tidal and core radii of the cluster; the cluster is truncated at $R=R_t$. The authors recommend a ratio $R_t/R_c\approx15$. Therefore, we just have to specify one of those two parameters (we also know that $u=226$). The tidal radius can be computed depending on the mass of the cluster and its distance from the center of the galaxy (see e.g. Wu et al. (2009)). That would require us to specify additional parameters, so I’ll assume that the cluster is average, and give it a tidal radius of about 10 parsecs. Thus, the core radius is roughly 0.67 parsecs. This could be an overestimate; Piskunov et al. (2008), for instance, surveyed 236 open clusters in the Milky Way and found that the tidal radius peaked at around 6 parsecs. Still, 10 parsecs is by no means unreasonable. At any rate, I’d prefer a more massive cluster, so more stars may survive for longer periods of time.

Some quick Mathematica gives me 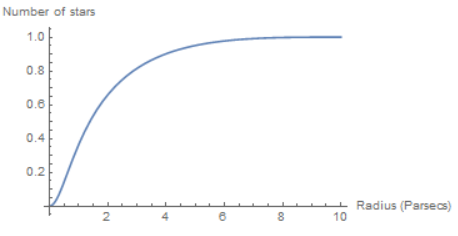 Note that the number density goes to infinity as $R$ goes towards the center (which we can check by simply evaluating the limit of $\mathcal{N}(R)$ as $R\to0$). However, we know that $n(R_t)$ is finite (although $\lim_{R\to\infty} n(R)=\infty$, which is why we truncated it). I played around with Animate for $N$:

and found that you can get extremely high number densities in the center, if you so desire, which makes sense.

To find the average separation between two stars, we calculate the mean interparticle distance, scaled correctly (i.e. the Wigner–Seitz radius): $$r_s(R)=\left(\frac{3}{4\pi\mathcal{N}(R)}\right)^{1/3}\tag{3}$$ We add another section of code:

and, plotting this function, get 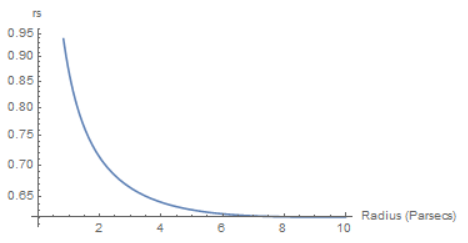 We see that $r_s$ is always greater than about 2 light-years for $0\leq R\leq R_t$. Towards the center. Therefore, the systems you’re interested in should be near the outer edge of the cluster.

Hold on a minute, though. This is a density distribution based entirely on a sphere of stars, with nothing else influencing them. We’ve guessed that this models an open cluster fairly well, but we also need to assume that the cluster, if left to its own devices, is unstable, and the stars will drift away. Let’s try adding a central object, like you suggested - an intermediate-mass black hole (IMBH). This isn’t terribly far-fetched; it’s an idea that’s been explored quite a lot in the case of globular clusters. In open clusters, we have problems because we need to explain how the black hole got there in the first place. However, we can ignore that for now.

If there’s a central, massive object in a star cluster, the cluster should exhibit a Bahcall-Wolf cusp. Within a distance equal to one fifth of the black hole’s sphere of influence, the density should obey a power law of the form $$\rho_{BW}(R)\propto R^{-7/4}$$ Number density, assuming a roughly homogeneous population (again, more on that later), should obey this power law: $$\mathcal{N}_{BW}(R)\propto R^{-7/4}\tag{4}$$ All we have to do is calculate the sphere of influence, find the number density there according to the King model we computed, and fit the two together.

Here’s the code I used to do the calculations and generate the plots (although you can play around with various parameters, like black hole mass and total cluster mass):

Well, we built a simplified model of an open cluster, and we made more assumptions than I’d prefer:

None of these, however, are fatal flaws in our model.

So, is this cluster going to be stable over long timescales? That, after all, is the question we’re trying to answer. Well, to start, there are several things in our favor:

Let’s do a more formal assessment (based on e.g. these notes). Let the mean mass of a star in the cluster be $m_m$. By the virial theorem, the speed $v$ of a star at $R\approx. R_t$ is given by $$v^2\approx\frac{GNm_m}{R_t}\tag{7}$$ The time it takes a star to travel $R_t$, the crossing time $t_c$, is $$t_c=R/v\tag{8}$$ and the relaxation time $t_r$, the time over which encounters with other stars begin to have an effect on the motion of a star, is $$t_r\approx\frac{0.1N}{\ln N}t_c\tag{9}$$ Furthermore, if a percent $\gamma$ of stars have a velocity above a certain critical value, then the evaporation time of the system is $$t_e=\frac{t_r}{\gamma}\approx t_r\times10^2\tag{10}$$ So, what critical parameters have changed now that we added the Bahcall-Wolf cusp? Well, we can safely assume that $m_m$ and $R_t$ are the same, as we specified them. It turns out, however, than $N$ has changed. Integrating over the piecewise density distribution gives $n(R_t)=0.89$, meaning that we have fewer stars in the cluster.

At the center of the cluster, there will indeed be some significant effects - and since the number density is much greater there, a large fraction of the stars should be impacted. I’m reluctant to draw analogies between stellar clusters and galaxies, but stars near the center should be influenced just like stars near the supermassive black hole at the center of the Milky Way, Sagittarius A*, orbit the black hole. The analogy is actually fairly good: Most stars in a galaxy don’t orbit the central supermassive black hole; they orbit the total mass of the galaxy. It’s a self-gravitating system, not a set of bodies orbiting one massive one. At the very center, however, stars are clearly orbiting Sagittarius A*. The same holds true for our open cluster.

Having lots of stars this close feels like a stellar nursery, not a stable cluster. Nurseries are highly unpleasant places: lots of dust and gas racing around, super novas as young bright stars merge and explode.

I don't see how a large black hole at the center of the cluster will help. Starting with a true glob, eventually, all the orbital material will eventually flatten out into a disk shaped spiral galaxy. Stars that orbit off of the orbital plane will eventually collide or have their orbits bent to an orbit more in line with all the other stars.

Dark Matter to the rescue!

An ordinary cluster will collapse on itself eventually without something to hold it apart. Since every star attracts all the other stars, the stars at the edge of the cluster will slowly creep in towards the center, compressing and collapsing the cluster. No more stars, but a gargantuan bang(!).

However, if there's an outer shell of dark matter that attracts the outer shell of the cluster, preventing them from falling into the core, the other stars might survive long enough to stabilize, form planets, host biospheres and hopefully intelligent life.

This is a fairly hand-wavey answer but it at least involves concepts we see in science publications now.

The half-lives for open clusters are gravitationally stable are for up to about 150 to 800 million years.

Clusters that have enough mass to be gravitationally bound once the surrounding nebula has evaporated can remain distinct for many tens of millions of years, but over time internal and external processes tend also to disperse them. Internally, close encounters between stars can increase the velocity of a member beyond the escape velocity of the cluster. This results in the gradual 'evaporation' of cluster members.

Externally, about every half-billion years or so an open cluster tends to be disturbed by external factors such as passing close to or through a molecular cloud. The gravitational tidal forces generated by such an encounter tend to disrupt the cluster. Eventually, the cluster becomes a stream of stars, not close enough to be a cluster but all related and moving in similar directions at similar speeds. The timescale over which a cluster disrupts depends on its initial stellar density, with more tightly packed clusters persisting for longer. Estimated cluster half lives, after which half the original cluster members will have been lost, range from 150–800 million years, depending on the original density.

Placing an intermediate mass black hole would act as a gravitational stabilizer if it was centrally placed in the open cluster. The OP is correct that the presence of a IMBH could have severe adverse effects on the integrity of the cluster itself and on any lifeforms inhabiting planets in the cluster.

Open clusters range from very sparse clusters with only a few members to large agglomerations containing thousands of stars. They usually consist of quite a distinct dense core, surrounded by a more diffuse 'corona' of cluster members. The core is typically about 3–4 light years across, with the corona extending to about 20 light years from the cluster centre. Typical star densities in the centre of a cluster are about 1.5 stars per cubic light year; the stellar density near the Sun is about 0.003 stars per cubic light year.

If the IMBH is located in the cluster's core, this could kept the core stars in the cluster formation while coronal stars dissipate. This could leave a compact cluster that is three to four light years across. With the high stellar density in this remnant cluster core interstellar travel could be readily accomplished.

The loss of nebular gases will reduce the probable of the infall of gas into the IMBH and thereby reducing the hazard of high radiation levels associated with the black hole. there are adverse events, but they don't need to happen all the time. There will be windows of opportunity for lifeforms inside an open cluster to live uninterrupted lives and develop technological civilizations accordingly.

Basically it's not inconceivable scenario for an interstellar empire in an open cluster. Of course, it also conceivable for it to be unworkable. But making certain allowances it could happen, because it's not impossible.

REFERENCES: All quotations above can be found in the Wikipedia entry on open clusters

Not the answer you're looking for? Browse other questions tagged reality-check orbital-mechanics or ask your own question.