How to escape from a small super-earth? [closed]

Closed. This question needs details or clarity. It is not currently accepting answers.

My question is about real physics or what is still possible given humanity's current understanding of how the universe works. No magic permitted, no bullshit with scientific terms and expressions mixed in.

Technologies don't necessarily have to exist but need to be possible or at least plausible to the extend where they can't be ruled out using our current understanding of physics.

Let's say you live on a planet with the same density as earth but with twice its radius. This means double Earth's gravity on the surface and double Earth's escape velocity. You want to explore a different planet. How do you escape that planet's gravity?

The technological civilization on the planet has a very strong urge to get a probe off the planet. Funding is granted, they have our current technology except for space travel (which they never did), and they got 100 years of time until the probe has to leave.

Such a planet has twice Earth's gravitational force on the surface. Because this has been doubted when I mentioned it in the comments, it wrote the concept down: 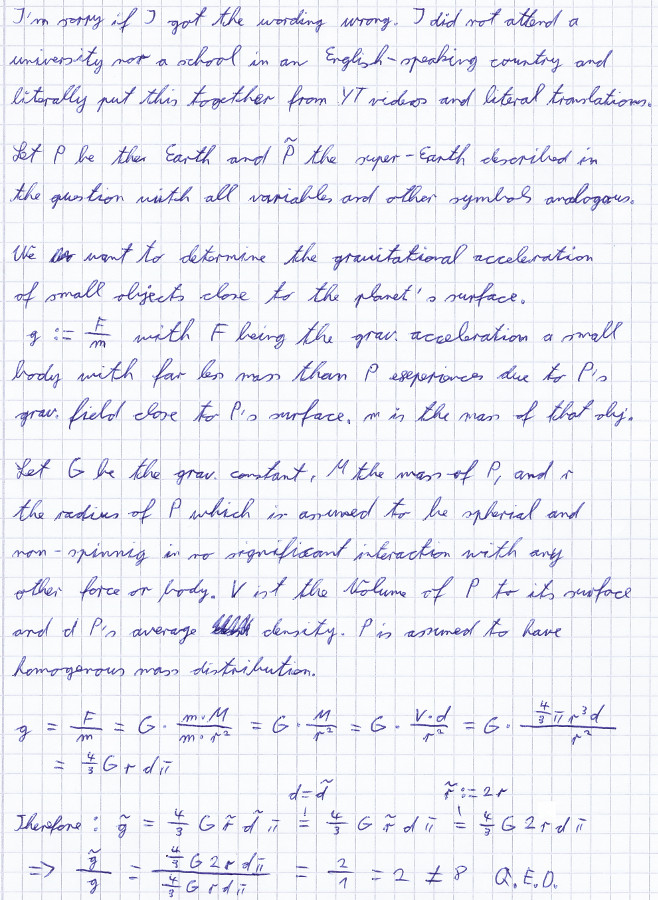 The image is scaled down so the website loads faster. High resolution is available.

Now, this is the rough concept which fits on a page and probably would satisfy physics teachers in school. If you don't believe it, I can write you a scientific proof but that will be several pages long and it preferable shouldn't be after 3 in the morning where I live.

Note: I forgot to mention that those formulas are valid for points above the surface of spherical objects even though they presume the mass to be a single point in the center of that object. That's a generally known fact, though, and proving it is really simple. I can prove that or you can just look it up on Wikipedia or something.

This is possible, with chemical rockets, but very expensive. The simple arguments about fuel ratios in the comments haven't considered the effects of a multi-stage rocket. The important thing about rocket stages is that they improve the "mass ratio" of your rocket, at the expense of needing a bigger and bigger rocket at take-off.

Let's consider rockets that launch satellites into Earth orbit, because there are more of them in a wide range of sizes.

Start with the Saturn V, the most powerful launcher built so far. It can put 140 tons into low Earth orbit. It can't do that for your hypothetical planet, but keep it in mind a moment.

Then we take an Athena II, a much more obscure rocket, but an effective modern design. It can only put 2 tons into low earth orbit, but the whole rocket only weighs 120 tons. So the Saturn V can lift it, and we have enough rocket to put that two-ton payload into orbit twice over. That combination can put a two-ton satellite in orbit around your super-earth.

This is horribly expensive, since you're using a total of seven rocket stages, starting with some very large ones, to launch a fairly small satellite. But it is perfectly possible. In the same way, this rocket combination could send a quarter-ton probe to another planet in the same solar system, using the 1.75 tons of spare mass for an eighth (and possibly a ninth) stage.

For single-stage to orbit using chemical propellants you need a mass ratio larger by a factor of e, which means that barring some spiffy unobtanium, or as yet unknown advance in propulsion technology you're out of luck.1

But bigger chemical rockets (perhaps with more stages) are the obvious answer (such as it is). This gets to be terribly expensive very fast.

A ground-beam solid-state rocket is possible in principle. You need high-power, directible lasers or something equivalent. Development would be a long and expensive process.

Perhaps this leads to a willingness to consider some kind of high-ISP nuclear thermal rocket for a second or third stage, but that's a pretty scary business with non-trivial side effects.

A working space program might not develop until more advanced materials were available or some kind of high-thrust, high-ISP propulsion system was developed.2

1 Note that in the 1960 and 70s single-stage to orbit was science fiction, but these days it is merely very hard. That's essentially all down to improvements in materials and lightweight design. Even so most proposed and existing systems still use at least two stages if you want non-trivial payload.

2 Be aware that people have been banging away at the high-thrust, high-ISP problem for our satellites and probes for a few decdes with only modest success. There are system that get better thrust than plain ion engines, but you're still not talking about launching using them.

Not sure how the development effort would get funded in the absence of an existing space program to drive interest in investment. Are you considering a absolute power structure?

Not the answer you're looking for? Browse other questions tagged science-based hard-science or ask your own question.

3
Global Warming, Gravity, and Space - The Fate of the Earth
1
Could an advanced species, having evolved on a large planet with a deep gravity well, be helped out of it from above?
6
Largest possible man-made planet-like body
12
Choosing axial tilt for human habitable planet for largest temperature variations
9
Gravity Propulsion
3
Will my bird likely be able to fly in this atmosphere on this planet?
55
How would people conceivably escape a planet too large for chemical rockets?
12
Can the Sun lose enough mass that Saturn's current velocity becomes escape velocity?
20
Is it possible to place a permanent probe on Uranus?
6
Super earth habitability