Realism of a setting with several sapient anthropomorphic animal species

The concept of a planet with several anthropomorphic sapient species (furries, if you will) is immensely popular. But would it actually make sense in the first place?

I am aware of the issue of "Carnivore Confusion" (the question of what would they eat besides each other) but that is not what this is necessarily about. This question pertains specifically to the possibility of how one could place possibly up to hundreds of sapient furry species on one planet without it being a ecological and evolutionary disaster.

Would there be an absolute limit to how many sapient species you could have? Would there be several versions of the same animal (rabbits, for example) based on area? Would they drive each other to extinction until one or two species are left?

If you want to have lots of sapient species, in a variety of sizes, all existing at the same time, you have to abandon conventional evolution. It's implausible that they would all achieve sapience at pretty much the same time, rather than at different points in the life of their planet. That leaves you with several ways of achieving the scenario you want, including:

I'd say it depends on the climate.
Remember, Homo Neanderthalensis and Homo Sapiens were able to coexist on the same planet for a long time before climate change forced/allowed the two groups to come into contact with one another. I suspect that, were it still an Ice Age, we'd still be at least able to live together.

Another possibility lies in a civilization from the old game Star Control 2: The Zoq-Fot-Pik.
(Bear with me here, this is an old game, and some of its ideas are a bit...eccentric.) 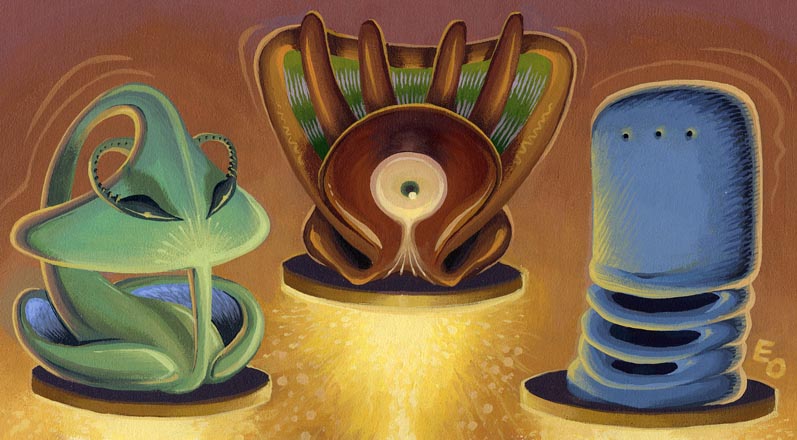 Long ago, in the distant past of their homeworld, four separate species were able to evolve sentience on the planet Alpha Tucanae b: The Zoq, the Fot, the Pik, and the Zebranky. While the Zoq, Fot, and Pik were quite content collecting raw nutrients from their environment, the Zebranky were carnivorous, and took a liking to devouring the other three. This pressure from an outside threat caused the three separate species to put aside their differences, and band together to form an alliance; eventually, their combined efforts were able to completely eradicate the Zebranky.

So what could happen is perhaps the civilizations could unify, and integrate into one society? Just some ideas.

Not the answer you're looking for? Browse other questions tagged reality-check evolution ecology or ask your own question.

3
Would multiple sapient species with similar diets cooperate or compete?

7
How would aquatic sapience evolve?
7
Planet of the Aves: Tool use
3
Would multiple sapient species with similar diets cooperate or compete?
23
Could an Apex Predator grow into an intelligent society?
24
Killing the majority of humanity for ecological reasons
10
How long would it take for an array of introduced alien fauna to form functional ecosystems on a near-future “Dead Earth”?
8
What would encourage multiple animal species to evolve human features simultaneously?