How might you know that unseen land exists? [closed]

Jack Vance's The Blue World is about low-tech descendants of castaways on a planet that, as far as they know, has no dry land. (They live on giant lily pads.) What kinds of evidence should convince them that there is land somewhere?

If you ever find yourself lost at sea or in a watery world and you want to find land, the following tips may be helpful: 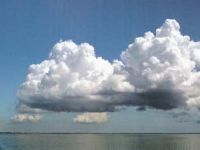 Source: Getting to Shore at Sea

FYI: I am not a survivalist. The closest I've been to water is on a beach, both an oceanic one and on a riverbank fishing one time. If you find yourself in this situation, do not rely on the methods I suggest.

You nailed two of the big ones right off the bat: dust/smoke and biological debris. But there's several other things one could use to infer the presence of dry land.

Plate Tectonics
All that was stated about the locals is that they are low-tech and live on lily pads. Having not read the book (and partly from the vagueness of the terms you used), I have no idea just how low that low-tech is, but assuming they're able to swim and have been living here for some time, they're bound to find areas where the sea bed seems to slope upwards, either gradually or sharply.
If they can follow the slope upwards, then (theoretically) they should be able to at least find a sea mount, which is fairly close.

Coastal Life Forms?
If there are lily pads, then they must've come from somewhere! And if there is dry land, then there will be creatures adapted to take advantage of the halfway lifestyle. Birds, for example, cannot live forever on the wing; they need roosting places, to rest and nest. Creatures with limbs can't swim as efficiently as finned or flippered swimmers, but they can crawl on land.
So seek out life forms which are known to live at least partly on land, and follow them. They'll lead you to land.

Folklore
Assuming the locals are native to the planet (I.e., evolved there), then they'll probably have stories about how they used to live on land. Such tales, whether oral or written, can be used alongside education to search for real-life places. The City of Troy, for instance, was a real city discovered by following clues left in the Illiad and the Odyssey. Such reverse-engineered maps could also lead to forgotten islands and the like.

Just some ideas to consider. Hope it helps!

When current hits a rock, a calm area surrounded by two branches is created on the lee side, with eddies from the left side flowing clockwise and eddies from the right side flowing counterclockwise. This would be interesting if the people were to reason by analogy from smaller example of this phenomenon to reason that a large landmass must exist because if it were not a landmass but rather say a floating lily pad, it would have been pushed to them. Another interesting example is clouds and precipitation or its lack. Or wind. But this would be harder to do because there would be no easy analogy. Also smoke from a large fire or floating branches or trees.

Not the answer you're looking for? Browse other questions tagged science-based earth-like .

22
How might you detect a "life sign"?
7
How might a planet be made of mountains? (And ocean)
6
How to "prove" a supernatural entity exists?
92
A poison that only works if you know it is there
50
How would you know your floating island was losing altitude?
1
How Might an Ancient/Classical-Type Civilization Rapidly Discover Advanced Technology?
2
How do we know that distant stars and galaxies are real?
3
Long-term effects of leaving everything you know - the aging issue
13
How tall can you build a mountain chain of bricks?
13
If stealth in space doesn't work, how might you hide?