How would gender roles differ if men are several times stronger than women? [closed]

How would gender roles differ in a species that is similar to humans in everything (i.e. IQ, gender ratio, etc.), except that instead of being 30%-40% stronger men are 2-3 times stronger than women? This is akin to polar bears.

How much political power could women have (voting, inheritance, holding office) before the advent of modern guns?

Will the increased dimorphism be likely to make genders less equal, more equal or will it not have much difference?

An image just for illustration, sourced from Gears of War wikia: 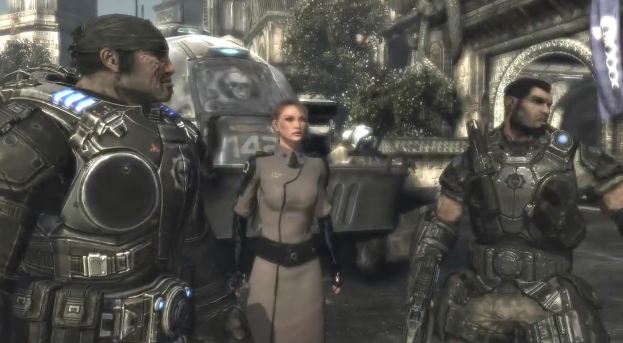 i don't think it would make any difference at all. a 30-40% strength advantage is absolutely devastating in 1-on-1 combat. 100-300% is simply overkill. women had very little political power until the "rule of law" took hold. after which, their relative physical strength was virtually irrelevant.

Let us suppose that males are much larger and stronger. That does happen in certain social mammals; for example Gorillas or Elephant Seals. This suggests that the male get large to compete with each other for mates and keep a harem.

Society would develop from hunter gatherer bands with one large male, and several to many smaller females. Smaller weaker males would be pushed out to roam on their own, or in nomadic bachelor tribes. Sooner or later, the strongest from a bachelor tribe, or perhaps a coalition of males would challenge the nearest chieftain/alpha/silverback and win, replacing him and taking his harem. Doesn't sound like the women have much choice.

But lets fast forward to the iron age. With a 20:1 ratio of females to males, and with the male's sole job being to fight and screw, the women will be doing all the farming, crafting, and inventing. Soon, their inventions will outpace the power of the single male. What if 10 women with iron spears, bows, and armor challenge a large male without? Sounds like the women will win.

The women could band together in tribe or villages of hundreds, and would chase off any incursion by nomadic males. They grew up without many males around, why would they want some around now? They would only keep as many men around as they decided were necessary for procreation. In this sort of society, I don't think it would even take until the firearms age until the women, by virtue of their technological progress, take full control of their society.

To me it seems like very large sexually competitive males is the perfect recipe for a matriarchal society.

There's two ways I can see it going:

Much the same or slightly worse.

Surprisingly Women are seen as the brains and are in charge. Men might be less bright because the development of all that strength may sacrifice other attributes. Such a striking difference in strength and likely size, will lead to other changes. Women could be the strategic generals because of it. Protected, like a King on a chessboard. Kings out of all the pieces on the chess board can't move much, but they are the piece you protect. It's possible that men won't have the ability to do fine work either, and will sacrifice dexterity for it as well. (I am not talking about the dodging and running kind of dexterity, I am talking about the kind a craftsperson needs). That much strength can't be added without drawbacks.

Not the answer you're looking for? Browse other questions tagged society gender or ask your own question.

5
How to create a world where birth defects are common and where women are still treated equal to men?
7
How would society be different in a world where sex/gender is trivially changable?
16
How would gender roles be affected by a society where parents could control the sex of their child
15
Would a society of simultaneous hermaphrodites have gender roles?
7
How would gender roles play out in an oviparous, sentient race?
18
How do you make men relevant in a setting where only women can use magic?