Safest, Quickest Way to Leave a Tall Building in an Emergency? [closed]

What is the fastest possible way to reach the ground safely if you are many floors up in a skyscraper and there is a major emergency?

Stairs can get backed up in a stampede:

I started thinking about this when I read this post on imgur:

We had a fire drill the other day. There are 33 stories in our building and normally I can make it down in under 5 minutes. However, the stairwells are only made to accommodate two people side by side. There was a severely obese man in front of me and this obese person had to use both feet on each step. As a result, it took 9 minutes to exit the building.

A fireman's pole seems like maybe it could be an addition to emergency stairs.

I am wanting practical answers conforming to current safety & building codes. However, please keep in mind different economic levels and different national security situations can have different codes/parameters, so even James Bond style, military or super-wealthy tycoon estates can be considered.

Why do buildings not use fireman's poles already?

I think you'll find that fire stairs are the best solution available today. You could augment them slightly, but there's not likely to be a revolutionary change to re-solve the problem of evacuating a building. Saving lives is serious business. It stands to reason that very smart people have thought long and hard about this already.

1. Put 'parking areas' every few floors for the slow or injured to wait while the crowds pass.

We had a fire drill the other day. There are 33 stories in our building and normally I can make it down in under 5 minutes. However, the stairwells are only made to accommodate two people side by side. There was a severely obese man in front of me and this obese person had to use both feet on each step. As a result, it took 9 minutes to exit the building.

Doing some back-of-envelope calculations based on the numbers in the above example, it takes just over nine seconds(9.09s) for an able-bodied person to travel down one floor. It takes over sixteen seconds(16.36s) for a handicapped person. If you were to put space every fifth floor, the worst-case scenario is adding ~37 seconds of total travel time for the people stuck behind the fatty.

But this useful in situations where you experience a new injury in the stairwell.

Evacuation policy for the places I've been at (I've been stiffed with the responsibility of fire warden, so speaking from experience) is usually for people that are infirm or incapable of travelling down a fire escape is to have them wait next to the fire doors - in the common areas, not within the stairwell.

Instructions are to send them down last, or if they refuse to go, leave them there and let the authorities know there's people still within the building.

[EDIT: adding this paragraph] A fire door is a pretty high-tech piece of equipment in itself. A good door is able to withstand a raging fire for over an hour, while keeping a person on the other side of the door unharmed. During a fire; people do into the stairwell, they don't necessarily need to go down the stairs.

To prevent tripping injuries, people need three points of contact: two feet, and one arm. The arm being satisfied with a hand railing.

This means the width of a stairwell is rather precise - designed so that people can travel two-at-a-time, but not three-at-a-time. You could make a four-wide stair, and add a hand railing in the middle. But the consequence of this is that that 'outer' stairs are about* four times larger than the 'inner' ones. Four times larger, means four times the distance to walk, and four times longer to exit.

*assuming the inner stairs are 600mm wide, around a 600mm cavity in the middle.

There are some emergency kits which have what are essentially rope ladders that can be hooked to the window sill and allow you to climb down. For practical reasons, these are usually limited to 2 or 3 stories hight, since the size and weight rises considerably as the ladder's length increases. As well, you need to be reasonably fit and agile to use this effectively in an emergency (since it isn't permanently installed, you would have to go to a closet and retrieve the package, kick out the window, install the hooks over the frame and roll the ladder out the window, all which might be more difficult in a smoke filled building or when your faculties are being overwhelmed by panic). Something like this could work to get you to a lower balcony where there is less smoke or fire, allowing you to go to the stairs and walk the rest of the way. 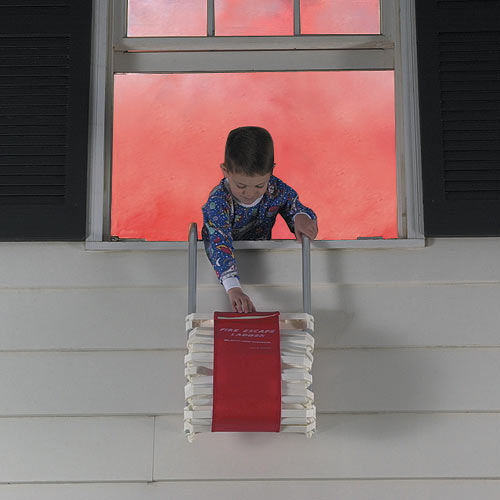 For long stairwells, there should be sheltered spaces at certain floors for people to stop or get out of the way. Many new buildings have designated shelter spaces where you are supposed to wait out a fire and so the rescue units can find you, but if a building is compromised by an earthquake, terrorist attack or other disaster, the safe spaces might not be so safe anymore.

Here is a fire escape concept which provides the speed of a slide but more control of the descent. Essentially it works like the ladder, but instead of a ladder, you hook the end of a very long fabric tube to the window sill and the fabric provides both protection and control on the way down. Apparently it is an elasticized fabric which provided enough friction to keep descent speed to a level where landing on the ground would not cause serious injury (maybe a sprained ankle or something). 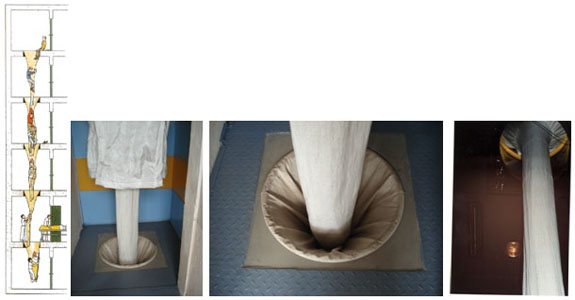 For very tall buildings, what is needed is something conceptually like the lifeboat rigs of an oil drilling platform. The people escaping would enter a pod, which is then sealed against the fire, and escapes from the building by sliding down a zipline (either pre positioned or deployed from the building by activating the alarms). A pod has the advantage of allowing you to have a mechanical device to control the rate of descent, and the possibility of crash pads, airbags or other devices to cushion even injured people from the forces of landing. Large lifeboats can carry 20 or more people, and since a building "lifeboat" won't need to carry survival suits, emergency rations or radios and beacons, the same sized pod could carry maybe twice as many people as the equivalent lifeboat. 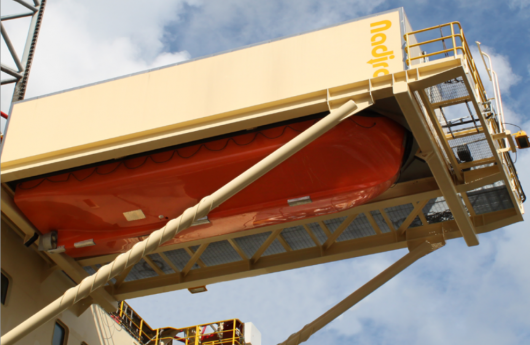 Lifeboat in its cradle

Extremely tall buildings would have few options, even a device like a lifeboat would need an improbably long "zipline" to deliver people safely from the top of something like the Burj Khalifa. For a building of that size, the elevators would have to be modified to act as lifeboats during a fire, and also be both self contained and self propelled in an emergency. You still have the issue of what happens when the elevator shafts are compromised; even a self propelled elevator car might become caught in an elevator shaft filled with debris or one becoming a chimney for a fire.

The fastest and quickest way to evacuate a building is by the fire stairwell. Forget about all the nonsense about fancy contraptions to get people down to ground level in increasingly absurd manners.

What is needed is an orderly evacuation system and fire wardens who ensure that people leave the building in an orderly manner. Fire wardens are there to make sure that mobility impaired persons either wait until the stairs are cleared before they descend or they are placed in locations where they can remain in safely until a fireman can come and evacuate them.

The author of this answer was a fire warden in a seventeen story building. Orderly evacuation plans, trained fire wardens and reasonably frequent fire drills will get people out of buildings in the fastest and safest way.

Forget the Rube Goldberg technological fixes. At best they're twaddle and at worst they not needed and most of them are far from safe.

Just to offer a historical perspective, Paulo Soleri explored this question as part of A Secular Cathedral, one of his many visionary works 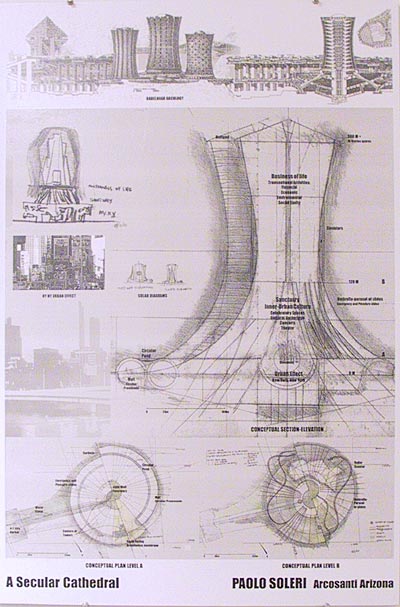 In this work, he had a series of escape slides designed into the building layout to act as a source of shade during the hotter months. In an escape situation, individuals could use the slides to descend out of the cathedral rapidly. Water in the form of a circular pond double both as a beautiful feature and to slow individuals down from their rapid decent.

One solution for a device to escape a fire is based upon an 'auto-belay' used on indoor climbing walls. the kit consists of an eye-bolt above a suitable window or two, a harness for the escapee to wear (similar to a climbing harness) and the belay device itself - a reel of climbing rope in a casing. There is an anchor point on the reel that attaches to the eye-bolt and the end of the rope protruded and it attached to the harness via a carabiner or similar. Once you have hooked up the reel, put the harness on and attached the reel to the harness, simply jump out of the window. The reel unrolls at a controlled speed, lowering you to the ground. 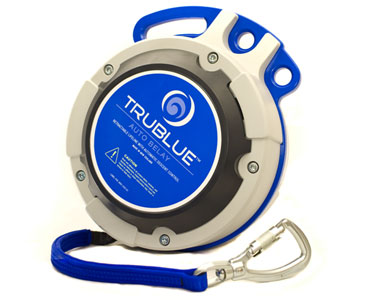 Design and build the buildings such that there are arching patios/balconies sticking out - Allow the users of the building to walk onto those patios, and provide parachutes on the upper floors with the patios. Give every employee parachute training.

How about a stack of parachutes and a human catapult? When the fire alarm rings, wheel the catapult out of the reception area (where it was functioning as a piece of modern art) and bring it up next to one of the downwind-side windows.

To get the window out of the way, load up the office copier or maybe that throne size chair that the boss sits in, and fire it point blank into the window. Then pass out the preassigned parachute backpacks to all of the company employees and start launching them out beyond the smoke and fire.

This technique would not only get all of your treasured employees out safely, but during the pre-fire years, it could serve as a productivity motivator... Just let a rumor circulate that the size and quality of each employees assigned parachute is directly proportional to the score on their most recent performance review.

"The harder you work... the slower you fall."

Have a dozen emergency bouncy castles on standby.

Seriously though, stairs are still the most effective exit route, that and regular fire drills so that people are used to exiting the building quickly.

Encourage women to store flat shoes in their pedestals if they're habitual high-heelers.

Public buildings generally have more routes of exit and more dedicated emergency exits, so they wouldn't be as constricted as an office block.

The quickest way, even for disabled people, is an escape chute.

This company says it can do a max length of 200 meters, which, given a 3-meter story, gets you some 67 stories of chute. This chute of theirs appears to be on a 30-something story building: 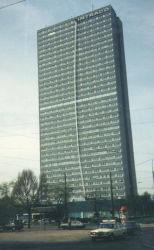 One of the the longest is at the London Olympic park, and descends close to 100m. http://arcelormittalorbit.com/whats-on/the-slide/