What would a orbital station and activity look like from the ground?

We have a highly advanced orbital station. It is designed to be rather stealthy, like a observation post.

Is it possible to make it completely invisible to the naked eye, even when in low-earth orbit?

Now to the hard part:
Computers or similar mechanisms on the ground are controlled by the station by short, rare bursts of commands.
How would I explain, that this information transfer is visible for a short window of time, even though the station is highly advanced. I need this transfer events to be noticeable from the surface for plot-related reasons.

Or is the fact, that you can see the commands, entirely improbable?

Yes, the communication should be noticeable from the ground, while the station remains hidden, and trigger a search for it.

The method of the people on the ground are the naked eye, maybe a radio. Telescopes etc. are planned for later, but only after the existence of the station has been indicated by the communications.

Low observable spacecraft were conceptualized by the United States and reputedly one code named "Misty" was launched in the 1990's. This satellite used "balloon" technology to envelope the satellite in a cone shaped cover which deflected radar and diffused light to the point the satellite was almost invisible without advanced tracking gear (presumably infra red or thermal imaging. 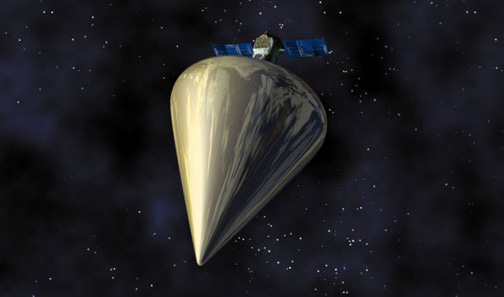 Today, we are on the verge of being able to use metamaterials to refract light or electromagnetic radiation around the satellite in paths the designers choose, effectively allowing the radiation to "flow around" the spacecraft so there is no "hole" to alert an observer. Misty might become noticeable by occulting a star or planet as it passes in front of the object, but a metamaterial shielded object will not. Obviously there will need to be "holes" in the shield for sensors to operate, and keeping the spacecraft safe from observation in thermal imagery will be extremely difficult, since the spacecraft is operating against a 3K background, and the power sources and any rocket burns will stand out as bright beacons against this.

The X-37 program shows a way to enhance this, the spacecraft is designed for long duration flight and has the ability to change orbits. If the stealth satellite can make orbital manoeuvres over friendly territory or the mid Pacific where it is less likely to be seen by ground observers, and potentially every orbit can be different, making tracking much more difficult.

As for the second part of the question, if the ground station is using tight beam communications, it will be impossible to intercept from the ground. To make it even more difficult, the ground station might send a tight beam to a relay satellite, so even the orbital parameters of the stealth satellite cannot be determined by observing the angle the ground dish is pointed at.

The only plausible way to crack this problem is to either be on the inside at the ground station in person, or to have inserted some sort of tracking program which records the transmissions and downloads to and from the satellite. Even if it is heavily encrypted, the pattern of transmissions and receptions to and from space with no corresponding satellite would be very illuminating, and alert an enemy intelligence service that something is in orbit.

If the satellite is communicating using a tight beam and is quite stealthy as Thucydides has suggested then detection of it's transmissions could be accomplished in 2 ways: (in addition to ground station fun)

1) If the direction of the station's transmitter can be adjusted, it's possible that it is simply pointing in the wrong direction during a transmission, and this transmission is detected on the ground.

2) Satellites often maintain an "earth lock" - they try to remain pointing at earth. If the station has a fixed-direction transmitter then detection could be accomplished through the station temporarily losing earth lock, and again transmitting in the wrong direction.

Either of these could happen because of a computer error, in either the programming or the hardware. Perhaps the earth lock or transmitter direction code contained errors. Perhaps one of the satellites reaction wheels had a temporary malfunction.

And of course it could be a combination of the two.

Something along the lines of a memory not being cleared when it's supposed to, and a software pointer reports an old earth lock location. Perhaps a reaction wheel sensor reports no fault when there is one and keeps spinning longer than it's meant to. Perhaps a solar flare causes a temporary memory error which results in earth lock or transmitter orientation data being corrupted.