Destruction of the moon

In the movie The time Machine, humans drill the moon and destroy part of it.

So this made me wonder, if we destroyed the moon like this...

How would it affect the Earth?

First, what will happen to the Moon is that the remaining mass will slowly start to form a new sphere, creating a new, smaller Moon. This is due to gravity of the mass.

Second, what will happen to the Earth depends very much on how do you destroy the Moon. If you use great force on one side of the Moon, it will move the Moon from its orbit. So depends on the direction, it might even send the Moon towards the Earth. In this case, it is apocalypse part II (Apocalypse part I was when a meteor obliterated the dinosaurs).

Third, upon destruction of the Moon, debris would fall on to Earth.

Suppose that you destroyed part of the Moon in a way that it doesn't change its orbit, then the remaining mass of the Moon would form a sphere and continues orbiting the Earth. Since it is now much smaller, then tides won't be as high as now. Night would also be a lot darker since Moon is the main 'source' of light during night. It won't affect metropolitan though.

Is it possible to achieve such a view as seen on the picture above?

To destroy even a part of the Moon would require a lot of energy. The best thing to achieve that is by explosion. However, explosion tends to be spherical since they push from the central point of the explosion outwards in all direction. So the result would be something like this. 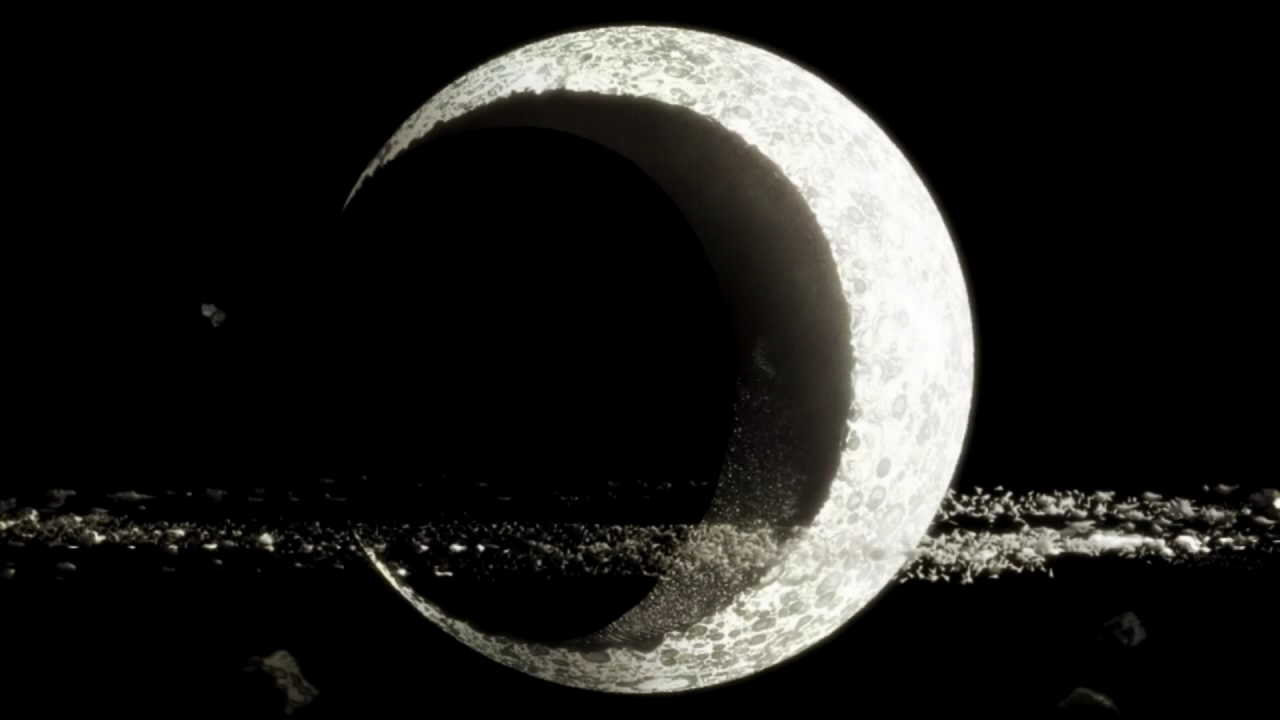 Of course if we talk about fiction, I don't see why it would be impossible to achieve what you want. You can use Squall's Blasting Zone, or have Sephiroth cut the Moon into two and then destroy the cut half in a hyper battle.

Also, if we completely destroyed the moon, would life still be sustainable?

If the Moon goes bye bye, then the greatest effect would be that there won't be high and low tides due to the Moon anymore. While it is debatable whether the Earth would still be habitable or not, one thing for sure is that the destruction of the Moon would affect many ecosystems along the shore and the sea. Without tides, the sea would be so calm, animals and sea plants that relies on tides to spread would possibly be dead.

Since the Moon also acts as a protective shield against asteroids, then with it gone we will see more falling stars.

We could survive, but:

Not the answer you're looking for? Browse other questions tagged science-based reality-check science-fiction or ask your own question.

12
How To Eat the Moon
12
What would happen to Earth if the Moon was destroyed?
2
Could radiation affect human DNA and environment in a positive way and how?
13
How would the Death Star laser really work?
10
What would the star chart be like if earth had a ring?
3
How do I explain the formation of my world scientifically?
5
How hard is it to shatter the moon?
96
Would a Moon made of water pose a threat to Earth during eclipses?
4
How can I have an Earth-like moon?