How long would it take us to notice Pluto disappearing?

Self-explanatory. I have a planet-eating entity moving slowly across the solar system towards Earth and I wanna know how long it would take for us to notice its presence once it starts consuming Pluto (assuming we had no prior warning or knowledge of its existence).

Within Two Days After Pluto is Eaten

I want to clarify a point that I'm not sure other answers are giving here, which is that we have a really, really hard time seeing Pluto. It's literally easier to look at another galaxy than that planet, even from the Hubble telescope. Here is the best picture that I could find from a large terrestrial telescope: 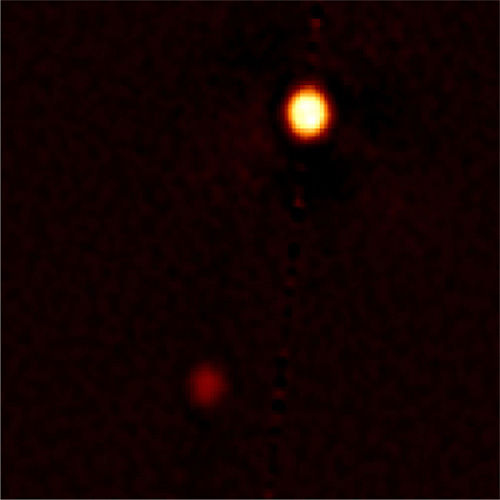 Of course, observatories aren't looking at Pluto much because there's frankly not much to see. So instead we rely on amateurs to track it day-to-day, with this being a good result: 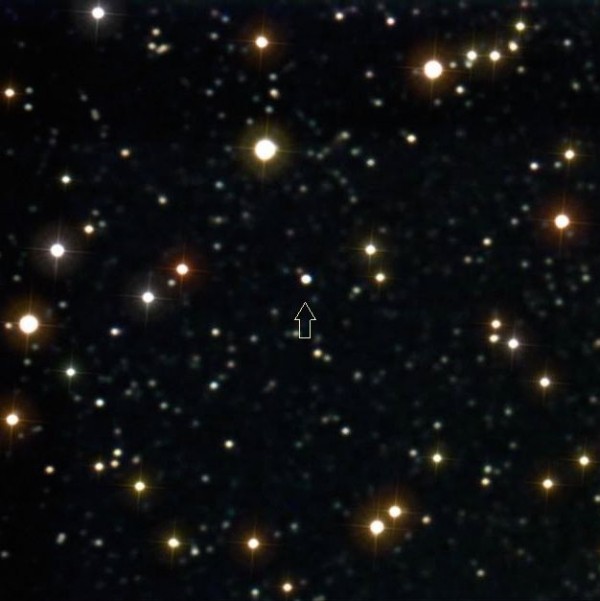 So basically we rely on amateurs seeing a dot to know it's there most of the time. If a being approached it that wasn't enormously larger the dot might look a bit bigger, but we would have no idea that it was eating Pluto. Even when it was done, presumably the beast would be at least the size of pluto so we would assume the dot we saw in its place WAS Pluto.

Now once the Pluto-dot disappears because the monster moved away from where Pluto should have been, or once it starts coming closer and we see the dot getting noticeably larger, we're going to say something is happening. Of course it's going to take a day or two of "odd" observation reports coming in before a big telescope is re-oriented in that direction (doing so will disrupt the observations it is currently taking and so involves a lot of bureaucracy).

Given the astronomical distances involved however — and the fact that even Jupiter is small compared to a distant galaxy — we aren't going to actually know WHAT happened until that sucker gets pretty close. Depending on size it may have to be about as close as Saturn or closer before we could get any real definition.

Note that if the planet-eater is MUCH larger than Pluto we would see that SOMETHING was different because we would see a much larger dot. We would know that SOMETHING was happening, but still would have no idea what. Exactly how close it would have to be before we could identify what was happening would be a function of the size of the creature, which is unstated. Keep this image in mind though:

Something the size of Earth could easily swallow Pluto and still not be properly visible even if it were as close as Saturn. I like to use Saturn as an example because we can get a pretty good picture of it from Earth... as in decent resolution, clear images. But it's also MANY, MANY times larger than Earth. So be sure to adjust the distance away that we can properly see it to its size.

Unless your monster is large enough to eat giants like Neptune or Uranus I think you'd be safe saying we couldn't get a clear enough image to understand the threat until it was as close as / closer than Jupiter. If it is on the scale of gas giants though, then by the time it hits Saturn's distance we can probably tell you the color of its eyes.

It will take a minimum of 4 hours because of the speed of light.

Since it can be observed by amature astronomers it will be noticed pretty much right away.

Worst case scenario would be if the sun was occluding Pluto it might be unobservable for a month or so.

Months at most, I think. Such an entity would be big enough for its gravity to perturbate Pluto's orbit before eating it, and the perturbation would be picked up by instrumentation in Earth. The astronomy community would point telescopes to Pluto, find the entity, and sound the alert.

Something that hasn't been mentioned is the New Horizons probe. It's out near Pluto right now. It passed Pluto last year and as of this writing is 500 million km away. Could it have noticed? The answer is "it depends".

If it had happened last year while New Horizons was actively observing Pluto during its flyby we'd know immediately. During its approach and flyby starting January 2015 New Horizons was taking photographs in many spectrums. If there was a chunk missing from Pluto it would see it. How quickly it would see it depends on how big the chunk was. The first low resolution photographs would arrive in about five hours (the fastest they can with the speed of light).

Ultimately in July 2015 New Horizons mapped Pluto at a resolution of about 1 mile per pixel with certain areas as fine as 50 m per pixel. If there was evidence of Pluto being gnawed on within those resolution ranges, New Horizons would have seen it.

But New Horizons is done observing Pluto and has moved 500 million km past it. Now it's observing Kuiper Belt Objects beyond Pluto. If your planet eater showed up now it wouldn't see it. But it might feel it. It depends on how massive your planet eater is.

The gravity from a very massive planet eater, significantly more massive than Pluto, arriving at Pluto now would very slightly pull New Horizons off course. How much depends on how massive. The smaller the anomaly the longer it would take to be noticed. Even then the conclusion would not be "there's something eating Pluto" but it would be chalked up to something out in the Kuiper Belt, perhaps evidence for Planet X.

The way your entity consumes Pluto could be the key here. The (essentially hard sf) novel Eater by Gregory Benford has a similar premise: a sentient black hole starts doing something similar, and is first spotted as a result of the resulting flares of radiation. This would be much easier to spot than the absence of Pluto, which as other posters have noted is difficult to see at the best of times.

4
Would a 1835 or 1910 collision with Halley's Comet be too preposterous to take seriously?
59
How would someone hide an asteroid in the void of space so only they could find it?
26
Making a Planet Seem Uninhabitable
12
If I were to put a moon-mass object in Mars orbit, how long would it take to restart the dynamo effect in Mars' core?
17
How long would it take a civilization to see and understand a Dyson ring?
9
How do I design the solar transit of a hot Jupiter?
45
How long will it take to discover they live on a moon and not on a planet?
11
How long would this eclipse last?
4
An alternative way to rotate or in this case rolltate