Getting around the effects of low Mars gravity

If my Mars colonists don't want to be crippled, they need to bear their own weight as close to Earth normal as possible for their waking hours. How about shoes (leather from goats and sheep) with magnetic bits engineered inside the soles. Then, for the other part of the equation, what about hard or soft flooring that contains iron or steel particles. If that won't work, what about belt, shoes, or other clothing containing weighted fabric or inserts? Now, how about the babies who can’t walk and may never do so if their bones aren’t strengthened in some manner? What about the food animals? Can they put shoes on the animals' (sheep, goats, etc.) hooves such as horses wear? What do we do about fowl? Can a magnetic device be attached the the bottom of their feet? I can’t think how artificial gravity could work on a planet’s surface. No convenient alien technology here, just orphaned settlers.

The first generation born on mars could be genetically manipulated to be better fit for the enviroment. Similar solution can work for animals. In fact we don't know much about how low gravity will affect pregnancy.

Aside from that, I agree with Andreas Heese's answer.

As per the effects that low gravity has, this flow chart by the NSBRI (National Space Biomedical Research Institute) should serve as guideline: 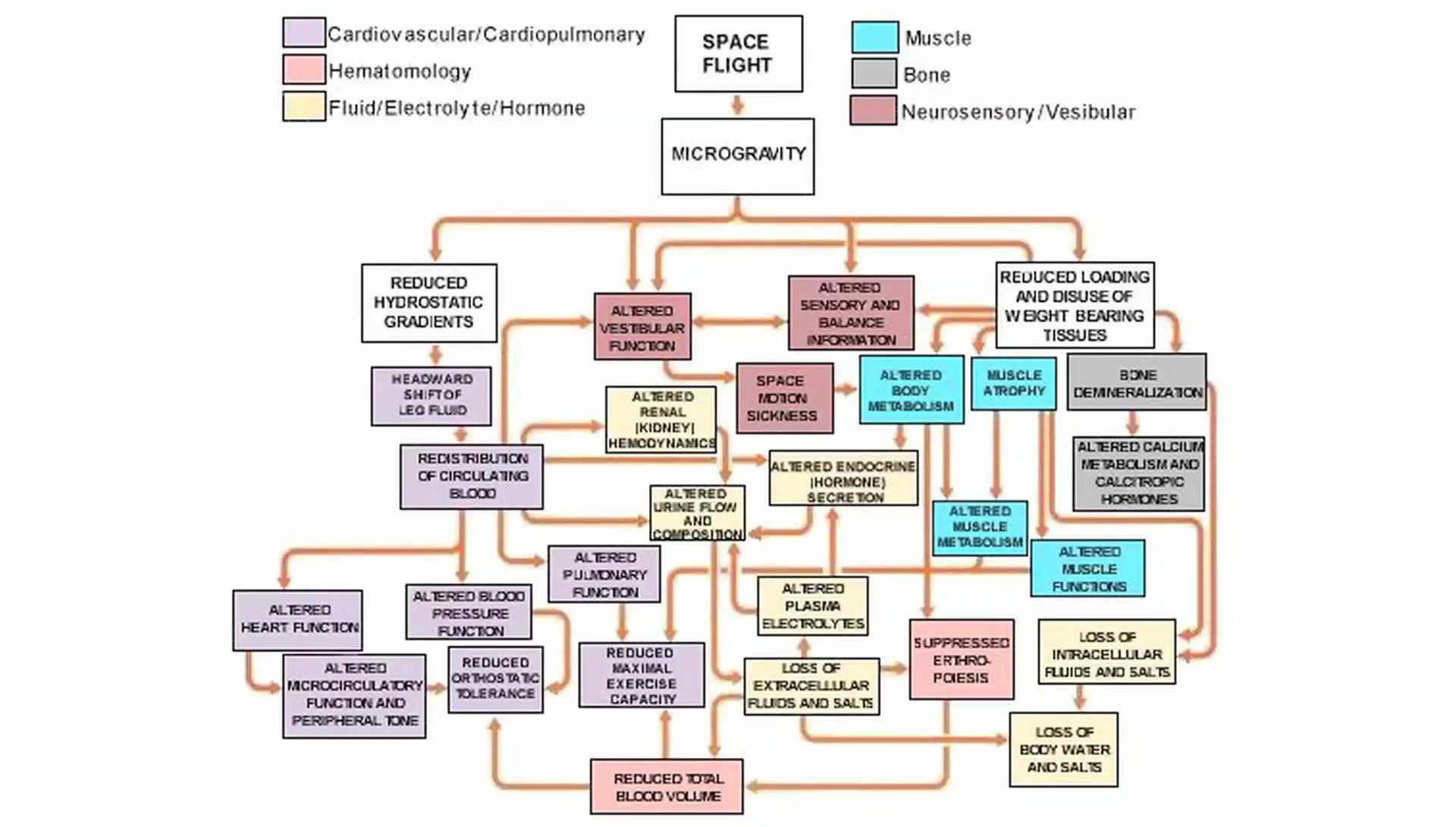 You may also want to see how Men and Women Adapt Differently to Spaceflight: 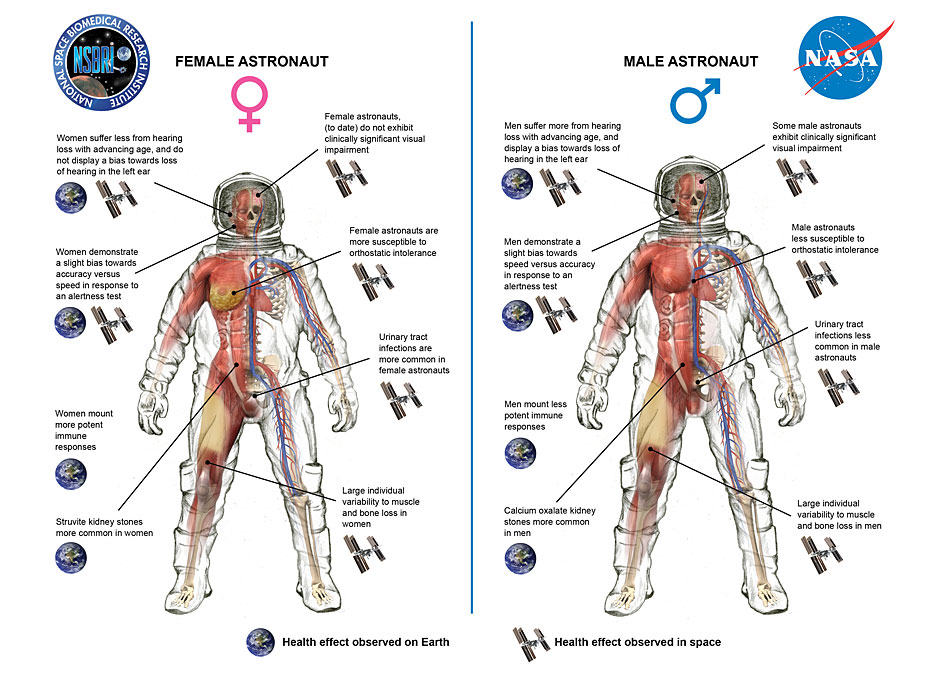 Of course Mars has other challeges such as the lack of magnetic field, the ambient temperature, and the isolation and psicological stress of the settlers.

I am assuming you did some research and found out that under orbital gravity (ISS), bones lose density. I also assume that this is fully true, understood well, and also applies for low gravity of mars. I am not sure about that, or if it even is a problem at all, but i don't want to research or discuss that, as it is out of focus for the question.

Putting on heavy shoes does not increase your bone stability. It doesn't even increase the "weight" of your body, it's just dead weight... on your shoes. While it becomes harder to walk, it will strengthen your muscles, but to increase bone density, you need weight to REST on the bones. So you'd need to shoulder huge weights, so they'd push down on your body. Wearing super heavy clothing might help (and it might look cool having everyone walk around in platemail).

But i think the basic problem of bones requiring stress to fully develop couldn't be handled this way. These days in space, bone density problems are countered by intensive special training. Maybe you can have facilities where adults can train hard to keep their bodies healthy? I have no idea how to solve the problem for animals or infants, though. Maybe a special diet or medicine could solve the problem for you?

Who says there are any significant health problems under mars gravity? We know that most effects of absolutely no gravity can be fought well with one hour of physical exercise (as can a lot of earth health problems, btw. ;-)), and Mars still has $0.4 g$. I think any planet able to hold an atmosphere at civilised temperatures is totally unproblematic with respect to gravity.

The main problem esp. early Russian cosmonauts experienced is loss of bone density and weakening muscles, like what is known on earth from people with e.g complicated bone fractures, requiring extremities to be immobilised for an extended period of time.

Bone (& muscle) tissue does not grow in response to gravity, but to the forces the muscles exert on them. The problem in zero g is that practically nothing does require any force at all. So you put an hour of exercise on the schedule of astronauts, and it helps a lot. As does very careful exercising for recuperating patients. They are not 100% fit when they return to earth, or to normal life, but far from having turned in wracks. The earliest Russian long-term cosmonauts had to be carried on stretchers after return. When the space shuttle brought back long term crew members from ISS, they walked down the gangway on their own.

A person that lounges about all day and watch TV turns sick, on Mars probably faster than on earth. Luckily there is no TV there, at least in the beginning. But work on Mars would still be work, especially outside in your (rather heavy and rigid) pressure suit. Ten kg rucksack feels like 4 kg only? Have one twice as large!

I wouldn't bet that raising children on Mars would be as uncritical. I certainly would not do it on a space station without a lot of animal experiments before. Maybe have a centrifugal kindergarten. ;-)

But the basic message would be the same: It's not gravity, it is your musclework that keeps the bones healthy.

Same as we do in space, I should think. Use weight training and anchored treadmills to retain as much muscle tone as possible in an effort to stave off osteoporosis. I don't see that having heavy shoes will do anything other than tone up the leg muscles.

Andreas answered as I typed the above, and he's right.

For children, you just have to do the best that you can. Over the course of many generations, they would ideally start to evolve and adapt to the new gravity, but the chances are that your colony will die out before then - to my mind, it'll be doubtful that enough children will survive to procreate more than another generation or two unless you were really strict on the weight training.

Obviously, the more time taken up in physical exercise/conditioning, the less time can be used for more productive (survival orientated) tasks. Chances are that the exercise will come second place.

I don't think you'd have large animals - chickens would probably be the best source of food and you could keep those in small/low coops to prevent them from harming themselves. Horses/goats/cows don't really have a place on Mars - if there were there, then they'd be an immediate food source.

Large Jumps? A person of normal bodily strength on mars should be able to jump a lot higher than on earth, lift heavier things, leap further. If you design the base without stairs or use some other design that forces them to do these things regularly then your people could maintain normal fitness by leaping around and hanging to the ceiling. Alternatively you can make a parabolic floor and rotate it so that real and centrifugal gravity combine.

One important question is, will they ever return to earth? 0.4g is not 0g and I bet body will adapt to this environment with muscle and bone loss, but not too much to be crippled.

End result? If they are to return Earth, they will not be able to walk unassisted. But on Mars they would probably be even healthier.

2
Gravity of an ancient Mars
5
Skyscrapers on low gravity planets
14
Do the moons of Mars have enough gravity to colonize?
14
Would weights in clothing be an adequate way to compensate for low gravity?
7
Low-gravity Bronze Age fortifications
6
Effects of slightly lower gravity?
3
How would colonists on Mars effectively move about with the lower gravity?