What color is a space elevator?

Consider a space elevator, a thread hanging from the heavens and being anchored to a spot in ground or sea barge at equator. As I understand it, it'd be very thin at ground and get thicker on the way up to GEO, and thinner again towards the counterweight station at the end. Construction material is basic pure carbon nanotube in this case.

Added details: I'm thinking of an early space elevator, with payload capacity in single digit metric tons. Hmm, how it is powered might radically affect how the whole thing looks like, but to avoid altering the question, it's ok to assume it does not.

What does it look like? What color is it? Would it glisten in sunlight, upper parts looking like a spear of light at early/late nighttime? Or would it be coal black, visible against blue sky as a black thread? Or something else?

Would the elevator need coating, paint, against UV light or water or anything else? Could it even be painted? I think not, weight would be too much. But if yes, perhaps atom- or molecule-thick layer of something that would stick, how would this change coloring options?

It would likely be painted or wrapped in high-contrast colours, such as alternating stripes or a checker board pattern of white and black or yellow and black reflective paint or material. Aircraft warning lights would be spaced around the diameter of the tube or shaft at 90°, every 100 metres between ground level and 15,000 metres altitude. 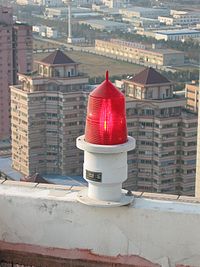 Above 15 kilometres the paint scheme would continue but with wider stripes or larger checker boxes. The aircraft warning lights would be replaced with vacuum-safe lights, half anchored to the tube or shaft itself, half on arms extended out from the elevator and positioned to shine back on it, also spaced farther apart.

The weight of paint coating can be calculated as area x thickness x density.

For paint I'm going to assume a state-of-the-art aerogel coating, which can be as thin as 1 µm (0.001 mm) and comes in a variety of colours (including transparent, for the black). Silica aerogel has a density of 1,000 g/m$^3$ and aerographene has a density of 160 g/m$^3$ but is transparent (the carbon black will show through), so half and half.

Not even 100 grams of paint weight would be added, for every 1 mm cross section of carbon nanotube under geostationary altitude. Well within the tensile strength tolerance.

Members of the fullerene structural family (which includes carbon nanotubes) are usually black when solid. I don't think that the nanotube needs an anti-UV coating and nanotubes usually shed water naturally so no coating is needed to prevent water vapour building up.

Hydrogen does react with diamond so there may need to be something to stop hydrogen reacting with the nanotube (not sure if this reaction still happens with nanotubes) but this coating could probably be colourless. I would avoid adding paint just for show due to its added volume and mass so your elevator is likely to be dull grey/black.

Edit According to @Rek, extra mass from the paint isn't a problem. In that case the colour is entirely up to you as paint can be almost any colour.

I know you are looking for the color of the material it is made out of, but unfortunately it might be painted neon-yellow or neon-orange like a traffic sign. Some color to make it stand out when you are looking at a night sky or clear blue sky background. Just to help plans and space ships from accidentally hitting it.

Others have answered that it would need color to prevent planes and spaceships from flying into it. However I'd propose that a no-fly zone would be put in place around the elevator to prevent any danger of accidents and reduce any terror threat. Taking into account the paint weight issue, it would therefore be its natural black color.

It’s worth noting that even fairly dark objects will reflect some light. Unless the space elevator is completely absorbent (which is possible, as Vantablack is made of carbon nanotubes, but unlikely, as those are specially configured — vertically aligned, while surely a space elevator cable will be made of laterally aligned nanotubes), enough light will reflect to make it a streak of ribbon in the sky.

It would probably stand out more on a cloudless night than it would during the day. Just as we cannot see Mercury as it traverses the sun, or a fly sitting on a car headlight, so a relatively thin object, no matter what colour or how reflective, will not be easily discerned in a bright sky.

Assuming you have a solar power station at the top of the structure (and why wouldn't you -- it's free power, at least to run the elevator), the cable can be any color you like, including flashing multi-color with chasing patterns along its length ("Sir, are you claiming you failed to see a cable flashing multiple high-visibility colors in a virtual barber pole stripe pattern? How did a blind man get a pilot's license, anyway?").

All that's needed to make it this way is to use the cable itself as the conductors to bring the power from the GEO station or Top End down to Earth -- and build LEDs into the cable nanotube structure.

The nanotubes have to be bonded together periodically along their length, to make the cable act like, well, a cable, instead of so much spun glass holiday decoration. The bonding points can be integral LEDs, and assuming they're close together (better for cable handling and strength) when lit they'll make the cable look like a line of light. Make them in equal numbers of red, green, blue, and you can make the cable lighting any color you like -- and because there are billions of these tiny LEDs, with some computing power added it can display any pattern the cable's shape will permit. It could even act as a display screen through a window in elevator car, sliding up or down as the car moves.

A Chain of Blinking Lights

The big problem with a space elevator is that unless you have an extremely strong tensile material the cable will have an extreme taper to it. The maximum tensile stress on the cable occurs at geostationary orbit, and that's where it would be thickest.

In either case, the tension is lowest at the ground, and so it would be important to make the cable as thin as possible at the bottom. Let's assume we found a material that only required a taper ratio of 1000. In that case, every foot in diameter at the bottom would require the geostationary portion to be 1000 feet larger in circumference.

If a cable were to go from a 10 ft diameter to a 10,000 ft diameter at geostationary orbit, then even by the time it reached airliner levels (say, 10 miles up) it would still only be 40 ft in diameter.

Wikipedia has a good article on this showing the taper ratios of various materials:

So, if you were standing near it, the thing would basically look like a radio tower extending to infinity. It would only be visible at all from a very close distance - a mile or two maybe. Therefore, it would be a navigation hazard and would be likely to have beacon lights attached to it every 500 ft or so.

The FAA requires any tower over 750 ft to be marked with two red lights and one high intensity white light every few hundred feet. These would be visible from a much farther distance than the cable itself, so from any distance more than a mile or two away you'd see what looked like an unsupported string of lights in the sky, and once you got close you'd see something like a radio tower that climbs to infinity.

Color won't be important - when you look at a radio tower do you notice the color of the material? The color will be the natural color of the material, except for the bottom few hundred feet where again the FAA has a rule - alternating colors including aviation orange.

Since we don't have a material that be used to make a space elevator, we don't know what natural color it would be. A good guess would be black, charcoal, grey, or a dull metallic color of some kind. But you wouldn't really see it unless you walked right up to the thing.

the ISS is testing "paint" AKA an electrically conductive coating to prevent static buildup, the radiation in space can cause static build up that can fry electronics. presumably the crawler would have electronics. I have no idea what color it is though.

mirror reflective or white is the favored color for space equipment just to minimize thermal transfer from light from the sun, the drastic difference in heating can cause strain due to drastic differences in thermal expansion. White has an advantage as mirrored reflective coatings usually requires a heavier metallic paint si white is the most common. So whatever portion of the cable that is beyond the thermal inertia of the atmosphere will be white.

For what to make the paint out of rek's answer about aerogel based coatings is excelent both for weight but also because it is an excelent themral insulator.

Not the answer you're looking for? Browse other questions tagged science-based space-elevators .