How can I determine the Lifespan of a Species

Age varies vastly even in just the vertebrate world, from the 2 years a rabbit has to the over 170 year old Seychelles giant tortoise, who is still going. Obviously, Lifespan will determine population, cultural views on age and most importantly, the amount of knowledge a person can learn and teach.

Is there a method to figuring out the Lifespan of a species? Perhaps related to their metabolism or their activity levels?

Life span directly relates to body mass and metabolism. Each creature (I'll attach conditions in a moment) gets about a billion heart beats in its life. For smaller creatures with high metabolism, like sparrows and rabbits, this means a very short lifespan, sometimes only a few years. For larger animals with slower metabolisms, like tortoises and elephants, this means a longer lifespan, sometimes over 100 years. Interestingly, chickens and humans are big exceptions, each of them having double the average number of heartbeats per lifetime. 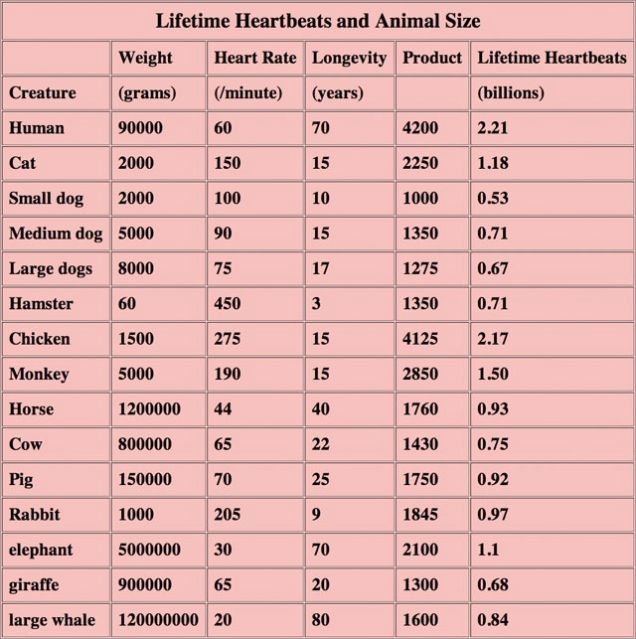 With that in mind, remember that age does not the species make. With a shorter life, the individual has a higher rate of living, by which I mean that everything happens faster. A rabbit matures much more quickly than does an elephant, but both have comparable percentages of infancy- the percent of the individual's life that it spends in infancy is comparable betwixt the two. You might have a species that lives only a year, but you can still write a coming-of-age story. Likewise, you might have a species that lives for a century and a half, but you can still cover all its life in one book. The trouble arises when you try to apply human time scales to non-human creatures. Take an extreme example, a species with a lifespan of ten minutes. Within ten minutes, an individual is born, lives, breeds, and dies. You could write a novel about the individual, just as you might about a human. There could be legends of a time, many many generations ago, so long ago that it is almost forgotten, when the world was dark, and there was no light anywhere (night-time) or when all the world was blazing with light (day-time). It all depends on the time scale, which I assume will be on the scale of the species whose lifespan you are trying to calculate. As long as your time scale matches your species lifespan, it really doesn't matter, other than stuff like seasons passing or the landscape changing. It's all about percentages and perceptions.

As a young nerd, I once saw a nature documentary that used that as a rule of thumb for the typical natural life of an animal. Unfortunately I don't recall what documentary this was, so I can't cite a reference for it. There may also a caveat, like it applying to land-mammals only.

I will look at this from a single aspect. There are other aspects which I cannot comment on. My aspect is adaptability. If the environment is hostile and ever changing, your species should have shorter lifespans to allow rapid evolution. In a more stable environment they can live much longer. Thus if elves are to survive, they should have perfect environment and they should be resistant of virus and bacteria. Otherwise, a virus can wipe out significant portion of the population and re-population would take time and another disaster might completely wipe them out.

If you want to find out the potential age of a species, you might look to finding out the Hayflick Limit for the species.

This theory determines how many times a cell can replicate before it effectively dies. This ultimate cell age correlates roughly with the lifespan of the species involved.

Obviously, this gives you the lifespan of a species in test-tube conditions and environmental factors have to be taken into consideration - especially in predator/prey scenarios or non-temperate climates.

7
How can I make ants the dominant species on earth?
16
Is a four armed arboreal reptile as described viable?
26
How can I Determine the Litter Size of a Species?
21
How can I Determine the Caloric Intake of a Species?
8
Would shortening a species lifespan increase the speed of technological advances?
5
Would the size of someone determine how warm or cold they are?
3
Creature that increases its own lifespan by killing other members of its own species
17
Minimal lifespan of a species for civilization to arise