The Centaur--Let's Get Real, Shall We?

Undoubtedly, one of mythology's most iconic creatures is the centaur, a human being with his or her waist glued to the torso of a horse. For this post, we are avoiding the question of how evolutionarily feasible such a creature would be because if we were to talk about that, we'd be here forever! For now, let's look at my proposals on how it would look in real life because biology is never as clear-cut as mythology. 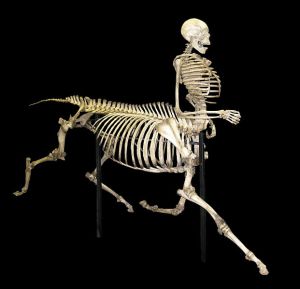 Let's start with the elephant in the room--traditional centaurs are portrayed as having two torsos. Why? Just...WHY? No other animal on Earth has two separate torsos in one body simply because one is good enough. My proposal is that the transition between human and horse is in the midriff. That way, we can have two separate sternums fused into one. That still raises the question as to which organs will be in which ribcage. Here is my proposal:

The next issue is what would a centaur eat? Would it eat grass, like regular horses? I say no and here are two reasons why not:

Instead, let's put those hands to good use--leaves, fruit, nuts, eggs and even insects.

Traditional pictures put centaurs using modern horses. While I say we keep that traditional image, I propose that this not be the be-all-end-all. Some tribes would keep the ancestral three-toed design.

Classical image often portrayed centaurs as being sexually unrelenting. Fortunately, biology can justify that behavior--just look up musth, a bi-annual condition in which a bull elephant's testosterone skyrockets, making him excessively aggressive.

This next issue is for anyone who wants to write a romance fantasy between a human and a centaur. Traditional centaurs are simply too tall for interbreeding to be merely as burdensome as regular breeding. My proposal is this--make the average centaur four to six feet tall. Which means structuring the centaur less like a thoroughbred and more like a pony or, even better, an Icelandic horse (the only one to have a fifth gait, ambling, which made this horse the ideal traveling companion during the Middle Ages).

(If you want to use the traditional thoroughbred, though, then go right ahead, but I'll warn you this--labor pains will reach critical.)

The final issue that needs addressing is color. 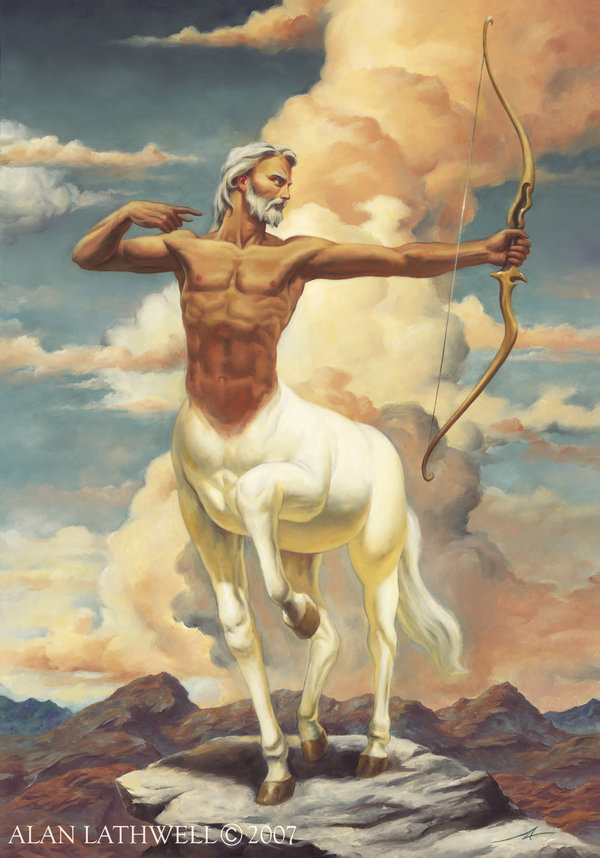 As you can see, the human half and the horse half are never in pigmentary sync. In nature, you have to be one color scheme or the other. So here's my proposal--the centaur's human half will be of either Caucasian, Asian or Polynesian design, but both halves will be the same color, be it:

Are any of my proposals listed above sound, or have I created some unintentional side effects to the centaur body?

Seems quite reasonable. I would recommend a few changes/additions, both in keeping with tradition and to improve the model.

Firstly, on coat color. I agree that the human hair and the horse hair should match, but skin tone really doesn't need to. My cat has black hair and white skin, so if she were bald from the ribs up, she'd be mismatched too, but its perfectly normal. Most animals don't have stripes or spots on their skin, despite have striped or spotted coats, so a centaur might have brown hair and white skin, or even white hair and black skin, although it would probably be more visually pleasing to keep the two colors similar. Additionally, I would think that the human's hair would extend farther down his spine, like the mane of a horse. Maybe not all the way to the second shoulders, but at least down past the first shoulders.

Digestion: As mentioned in some of the comments, a centaur really can't survive on human-sized organs, so I recommend horse guts in the horse part. Big lungs, big heart, big stomach, but only one stomach. If a centaur is really a mix of human and horse, it should have a human-esque stomach, capable of processing meat. Classical centaurs are archers, presumably not shooting at grass and berries, so give them big, horse-sized human stomachs. This also solves the problem of low-nutrition grass. If centaurs were only eating berries and leaves, they would be too busy grazing to get anything done, like teaching Achilles and Jason to fight. Side note, if Chiron had spent a little less time foraging and a little more time teaching, Achilles might have known to wear boots into battle instead of sandals.

Heart: Definitely a big horse heart in the horse chest, but I think a smaller, back-up heart should be in the human chest. Most mythological creatures are pretty hard to kill, so it makes sense that if you spear the centaur's horse-heart, a secondary, emergency heart could take over. Of course, this heart couldn't keep the centaur up and active, but it might be enough to keep him alive for a while in a comma-like state. It would eventually give out, but if he got a horse-heart transplant or something, he might pull through. With that in mind, a second, smaller set of lungs should be in the human half as well. If nothing else, it would increase the oxygen uptake and blood flow of the centaur.

Brains: Of course, centaurs are assumed to have human intelligence, suggesting a human brain, but brains do a lot more than just support consciousness. People say humans only use 10% of our brains, which only accounts for conscious use. 100% of the brain is used, just not for thinking. A lot of it is devoted to little things like telling the heart to beat, the stomach to churn, and the lungs to fill. Not to mention processing nerve signals, handling balance, and regulating temperature. A mouse and a rabbit have similar conscious brains, but a rabbit still needs more gray matter because the rabbit has more body to manage. A horse is less intellectual than a man, but the horse still needs a bigger noggin because the horse is much bigger, so I advise a secondary brain at the juncture of human and horse. The lower brain should handle basic functions, the higher brain should handle consciousness and personality. Another way to do this might be to extend the brain down the spine, eliminating the troublesome second brain. Some animals already have brain extending down their brain stems (that's why, if you do it right, you can cut the head off a chicken and he'll still run around) so it's not an impossible idea.

I'd just like to point this towards this excavation exhibit at University of Tennessee, Knoxville. 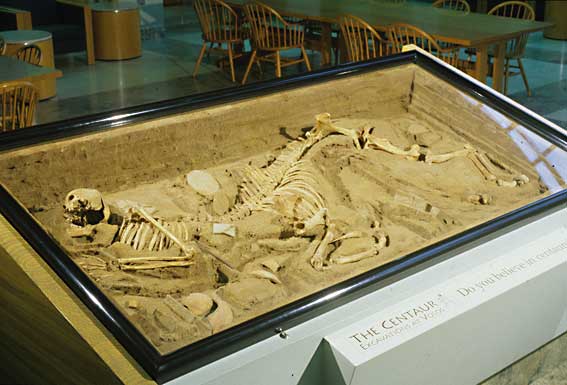 (This is a hoax, as detailed here. But quite well done, I thought. (I saw this exhibit once; it was set up in one of UT's libraries. The case is full scale, and quite realistic looking.)

An addition to @Aziri's answer

Stomach (all four of them)

Horses don't have four stomachs, I would recommend a single, hybrid human/horse stomach because then they can occasionally munch on grass, and can digest meat= the ultimate omnivore.

Heart (if it were human, we'd diagnose him with cardiomegaly)

An addition to help that single heart, borrow from giraffes and place some additional helping pumps to the human part's arteries.

Lungs (in all mythological humanoids, the lungs make up 15% of the total body volume, rather than the typical mammalian 7%.)

When I'm referring to human lungs, I'm really just referencing to air sacs in their place.

Structure it in an avian manner, where the movement of the front legs compressing and decompressing the air sack is analogous to how the bird's wing muscle compresses and decompresses the air sack. We separate the horse lung into two parts, a not compressing part, where the gas exchange occurs, and two air sacs, one type placed in front the main part and into a part of the human lungs, the other (from which, the air leaves the creature) is solely in the human lungs, that has a diaphragram. This ensures, that the air that passes into the lungs is always oxygen rich.

Also, apparently everyone overlooked the tiny little factor in this question, that horses are obligate nasal breathers. So use the human mouth breathing again, but don't forget to give them some sort of a phlegm that can protect the throat from getting sore.

Human lungs and the long windpipe can be used to filter and heat the air with lesser resistance, which is a limiting factor in horses, but we can mess around with it freely, avoiding the dead space (not the necromorphs) issue.

Instead, let's put those hands to good use -- leaves, fruit, nuts, eggs and even insects.

And meat. They were damn good hunters in mythology.

Traditional pictures put centaurs using modern horses. While I say we keep that traditional image, I propose that this not be the be-all-end-all. Some tribes would keep the ancestral three-toed design.

If they live in the forest, why not to use deer lower bodies instead?

This next issue is for anyone who wants to write a romance fantasy between a human and a centaur. Traditional centaurs are simply too tall for interbreeding to be merely as burdensome as regular breeding.

There's another problem with this, click the link to see it, if you dare: MR. HANDS (spoiler: he died, reasons: perforated intestine)

By the way: if we're here, I would give centaurs a longer gestation period, so the human and the horse half will be equivalently developed.

make the average centaur four to six feet tall. Which means structuring the centaur less like a thoroughbred and more like a pony or, even better, an Icelandic horse (the only one to have a fifth gait, ambling, which made this horse the ideal traveling companion during the Middle Ages).

That's not true, any breed of horse can learn gaits and imagine if those horses want to learn the moves. It's way easier, and an extra layer of narrative fluff if you want to detail what type of movement they use in various situations.

I would also give a thicker skin and bones to the human body to explain the +1 natural armor, and the longbow usage, we've seen in D&D.

This would require stronger bones in the forelegs, but I think it's easy to come up with a solution for that.

Powerful, fast and tough, centaurs have the upper half of a human. However this part, aside from the air sacs (protected by the ribcage (this is, why centaurs have two.)), the windpipe and the esophagus, which two are both protected by a cartilage structure which is similar in segmentation to the spine.

Thus the human part is very resilient and flexible as it mostly contains muscle bone, connective tissue, and the myoglobin reserves.

The horse part is optimized for longer endurance runs. But the myoglobin reserves, the avian lung structuring, and the hybrid nasal and orofacial breathing also enables them to perform in a sprint just as well.

Their communities are mostly hunter-gatherers, occasionally farmers and a small plus: They can digest the other parts of the wheat too.

Their numbers and low, mainly because of the long gestation periods, and can only increase slowly.

Not the answer you're looking for? Browse other questions tagged science-based biology fantasy-races mythology centaur or ask your own question.