How can I tilt a planet's rotation axis?

The rotational axis of the Earth is slightly tilted now, but I would like to tilt it to 90° - something like Uranus has - and make the Earth rotate with one pole always facing one direction - eg. on summer it would be rotated to the sun, on winter away from it (that means the cold place on earth isn't always a pole), so the seasons still exist. The Earth would rotate as if it was "rolling" across a vast space disk.

How could I tilt a planet's axis to 90 degrees (or as close as possible)? Is this even possible?

There aren't really enough parameters specified in the question to guide an answer (as can be seen by the variety of responses, ranging from slow mechanical interventions to planetoid collisions).

In general, the Earth can be considered a very-high-efficiency gyroscope with monumental rotational momentum.

@Yakk mentioned E29J energy of rotational momentum. (I assume he means 1 x 10^29 Joules). That's 100,000,000,000,000,000,000,000 Joules. When he says it would take 100 seconds of the Sun's energy output to offset the Earth's rotation, he's not talking about the energy at the surface of the earth; he's talking about all the energy you would trap if you had a shield that surrounded the entire sun, at the sun's surface, for 100 seconds. That shield would have a surface area equal to the sun, which is 12,000 times the surface area of the Earth. And the sun is actually putting out about 3.8 x 10^26 J/s, according to NASA's Sun Fact Sheet. So, you'd actually need a little over 250 seconds of output from the Sun. If you were willing to accumulate the equivalent energy from a smaller source over a month, you could go for another star that only radiated 1/10,000th of the Sun's output (a red dwarf would be handy, I suppose).

Then you'd have to collect that output (all of it), and transfer it to your Earth-tilting mechanism. Alternatively, if you wanted to use the Sun's energy, but were only willing to gather the energy near the Earth, if you were able to build a collector with a surface about the size of the Earth and put it at a Lagrange point ahead of or behind the Earth in the same orbit, then it would take only... 1,252 years to collect all the energy you'd need from the Sun. That's assuming you had 100% efficiency in all of the processes from collecting to transferring the energy, conversion into motion, etc. Make it 2,000 years, for good measure.

I hadn't thought it would be necessary (or useful) to calculate the equivalent in nuclear material that would be needed to create the same effect, but just for grins, here goes:

So, in hard science terms, there's no obvious alternative source of energy other than a planetoid that would accomplish this task, and as you've heard, a planetoid would make a pretty mess of the planet in the process.

Have you considered just finding one such planet and settling it? The time and energy expenditure would be miniscule in comparison... Or just make up a fantasy solar system where the planet already exists; lots of others choose this route to reach an otherwise-implausible context.

You will need to apply some sort of torque force to change the axis of rotation.

The simple brute force method would be to slam a planet into the Earth (much like the moon was formed) at the proper angle to change the angle of rotation. There are a few obvious flaws to this process, including the extinction of all life on the planet, changing the speed of rotation (Earth's day was apparently 10hr long after the collision) and if you do it wrong, you may end up with the planet turning in a retrograde direction, (much like Venus) 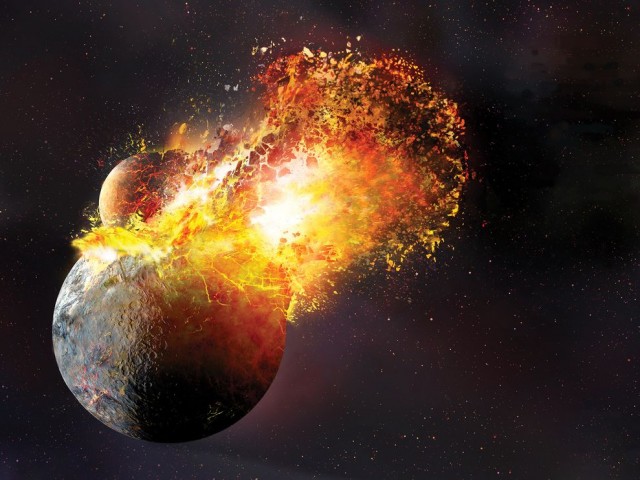 A somewhat more elegant method would be to apply gravitational torque by flying asteroids past the earth. This is similar in concept to momentum exchange to change the planets orbit, (see obligatory XKCD comic), but flying the asteroids at high angles to the ecliptic would provide the torque at an angle to the axis.

The main issue with this method is that the Moon is stabilizing the Earths axial tilt, but using the asteroids to move the Moon out of the way first then allows for some astro engineering to change the axial tilt of the Earth.

You might like to read "How to spin a planet" from Paul Birch. The basic idea is to accelerate (or decelerate) some large mass against the planet's surface. Due to the principle actio = reactio you'll accelerate the planet in the opposite direction, causing it to spin / change its axis.

Note that IMO the concept presented in the paper (yes, that's a paper!) above is a bit too complex for your case, because changing the rotation axis means you'd need to dynamically alter the path of the reaction mass / high velocity projectiles around the sun.

A simpler setup uses an acceleration ring (think a hyperloop track) around the planet. Energy comes from (lots of) solar panels.

The correct placement of that ring is crucial and requires good knowledge of the inertia of the planet. Using multiple rings could be an option here. Correctly placed they'd allow for free definition of the planet's rotation axis (and speed of course).

Strong enough earthquakes at strategic locations and times might well be enough to rock the earth into a drastically changed axial tilt.

Admittedly, this was a magnitude 9.0 earthquake, which moved the axis of the earth by about 3 inches. Hollywood would make it work...

Building up on Pete's answer, the solution would be to trigger a coordination of massive earthquakes. Millions or billions of them.

The easiest way to trigger massive earthquakes is to blow up a lot of thermonuclear bombs strategically placed deeply underground (not necessarily in land, could be even in deep oceanic trenches). Preferably some very big ones like Tsar bombs. Perhaps you could detonate a lot of them simultaneously to exploit constructive and destructive sismic wave patterns.

After some millions or billions of such detonations, you would be able to gradually tilt the Earth's rotation axis until you achieve the desired 90 degrees tilt.

There are a few things going on here. While the earth rotates on a 24h daily cycle, it also precesses on a 22kyear cycle. That means the axis of rotation changes and makes a complete circle. Given these mechanics, you'll have to strip the body of all rotational momentum, so that it is not spinning or precessing, then using whatever mechanism that countered the existing momentum apply it in the desired direction of rotation.

You may be able to accomplish it more efficiently without bringing momentum zero, but you'd have to very precisely apply momentum in the exactly correct direction and timing. Failure to do so would work against you. For an idea of the power required, consider the angular momentum of a solid sphere.

This is much easier when the planet doesn't spin, so you might want to spin it down first. Then the tiniest force will set the pole moving to the equator. Stop that motion when the pole has moved 90 degrees. Spin planet up again after that. You did save the rotational energy, didn't you?

You smack it at an acute angle with a big rock that's going really fast. Then you have to do it again, and again, and again, every time it tilts back because that's only going to effect the outer layers and the core rotation is going to drag those back into alignment. Meanwhile the torque you are applying to tilt the crust and the friction between the mantle and core that is being created are going to either rip the planet apart or heat it molten and that's without factoring in the direct heating from the impacts. Oh and the Moon would have to go as it stablises the existing rotation too.

You apply constant gravitational torque either using direct gravity manipulation if you have the technology or by flying huge rocks just past the planet you want to tilt, you'd have to dump the Moon anyway or it would capture a lot of the rocks so you may as well cut it apart and use it for the rocks instead. You'd have to apply it for a really long time to get the core to align and again the waste energy from the torque will either destroy the world or evaporate it.

If you can use direct gravity manipulation you could stop the world spinning altogether, Moon too, (you also have to stop it in it's orbital track too or it will pick up rotational energy from it's orbital velocity) without breaking it. Then once all motion died down, you could tell by the total collapse of the magnetic field, spin the system back up in a new direction. Of course you then have to bring in a new atmosphere and oceans since the solar winds have stripped the original ones off while there was no magnetic field to protect it. If you can only directly effect the crust you may have to exceed the normal Roche Limit of the world (which you can if you have it in an artificial gravity field) to get the core spun up again since it's the size of Mars and the only thing inducing it to move is surface friction between the liquid outer core and the mantle. This solution still has the potential of boiling the planet but that's not an impossibly bad thing this time around.

Not the answer you're looking for? Browse other questions tagged planets earth or ask your own question.

12
Can planetary bodies have a second axis of rotation?
1
What would it take to knock a whole planet to 90 degrees of inclination relative to the sun?

6
What is the viability of a planet rotating on two axes?
7
What is the expected terrain for an arid highly eccentric Earth-like planet?
6
Seasonal progression for an Earth-like planet with wobbly axis tilt?
4
Tidally locked planet with day & night cycle
6
The (Alternative) Reason for the Seasons: Highly Eccentric Orbit
16
How plausible is a 'tilted axis' planet with a “south pole” constantly facing toward its star?
7
Spotlight distribution in a hollow earth?
12
Can planetary bodies have a second axis of rotation?