How to create the eternal storm?

The Great Red Spot on Jupiter and the numerous Great White Spots on Saturn are storm systems that encircle the globes and last for decades, centuries in Jupiter's case. These are formed on Gas Giants though, with atmospheric compositions that would not support Human life, or pretty much any life that we would recognise. So what little I have been able to glean as to the cause of these storms does not hold up for my scenario.

I'm building an earth-sized world with an Oxygen-rich 'breathable' atmosphere. Currently my Northern Hemisphere is still 'fluid' and can be changed to accommodate any features I care to include. I've been thinking of including a giant 'eternal' storm that slowly circles the globe.

Is a storm lasting decades-centuries possible on a non-Gas Giant Planet?

What conditions do I need to create a large 'eternal' storm?

I would really like a travelling 'eye' of the storm, even if it only forms occasionally. I'm hoping that it can be a bigger than a normal large hurricane. 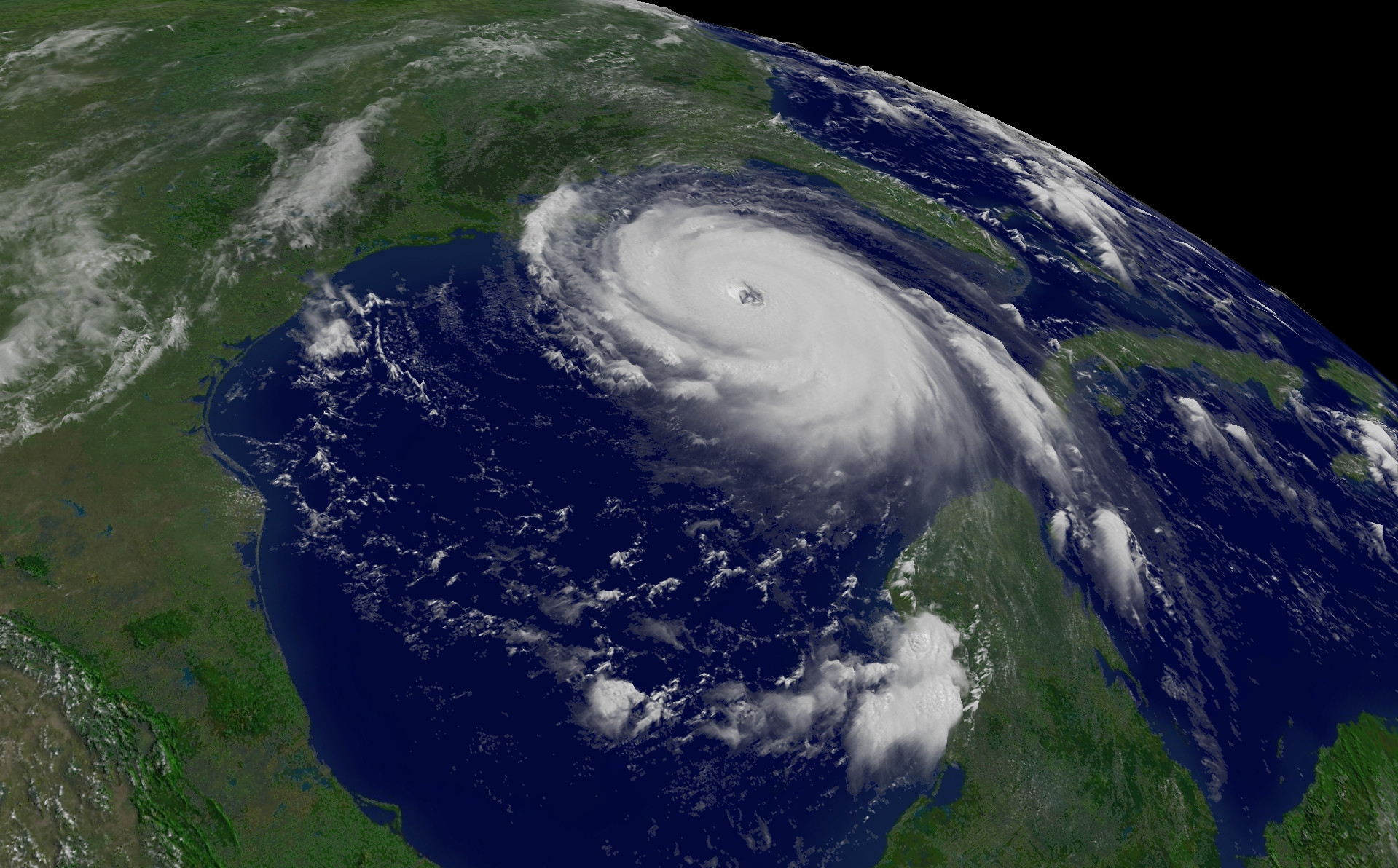 I'm hoping for a generic answer that others can also use, so I'm tempting fate and not including my own world map. But if it really becomes necessary I can add it. Remember, I can change my world's northern hemisphere to fit the requirements of the story. Tell me what I need and I will make the changes...

Currently I have 'mostly' open ocean (~80%) with a single large continent in the Northern Hemisphere. It's about as wide as North America from New York to San Francisco. It is a hot, dry desert with a large Rockies/Andes equivalent mountain range running horizontally W-E, across the very top blocking the arctic winds from bring snow (and associated springmelt) and cold temperatures to the desert region. This can change if necessary, although I would really like to keep the large desert.

Things that cannot be changed:

Note: Yes, climate is complex. But I'm asking if this sort of storm is possible on a non-gas giant planet, without killing off all the life on the planet. As well as looking for a generic list of conditions/features that can set me on the path to creating this storm. Also, please note, I'm not asking if this storm would be possible on Earth.

I'm thinking this is a no answer, but lets see where I end up. Some parts to consider for a hurricane on Earth:

1 - The hurricane is largely fueled by ocean temperatures and is self-defeating to some degree. High winds turns water into vapour (an act that cools surface temperatures) and tend to churn the water, bringing up cold temperatures from the depths. This means most hurricanes have a limited life span over a deep ocean as it'll kill it's own fuel source

2 - Hurricanes are affected by what are known as 'shear winds'. Wind shear is the difference in wind speed at the surface vs the wind speed at the top of the hurricane. This is actually one of the heaviest limiting factors of hurricane development (and usually where elNino/LaNina play their part in hurricane formation)...you need the wind shear to be as small as possible here. It has nothing to do with the speed of the winds, rather the difference in the speed of the winds. If the winds at the top of the storm are 40mph north, while the surface is only seeing a 15mph winds to the north, then the top of the storm is moved away from the bottom of the storm, separating the system in 2. Anything greater than 15mph wind shear usually prevents hurricanes from forming, or outright destroys ones that have already formed.

3 - Hurricanes are at their most powerful when they are fully closed systems. When something interferes with the system and blocks the storms circulation (mountain or land...madagascar has torn a hurricane apart in the past) then the system falls apart quite quickly.

4 - There is a huge amount of water associated with a hurricane and this water has to end up somewhere. Usually this results in a giant rain dump as the hurricane loses shape and energy

With that information in mind...it will be challenging to have your multi-decade storm cross over land and still retain it's shape. It's not fully unheard of as a few storms have successfully crossed from the Gulf of Mexico and into the pacific ocean, but they usually lose so much strength in this process that they move from hurricane status down to a tropical storm or depression. It's only when they reach warm water and the correct conditions on the other side of land that they reform. So I would hesitate to say you could have this system cross any land mass that has mountains or even high elevation plains/hills.

Earth posses what is known as thermohaline circulation. In short, this is the transfer of heat through the ocean as warm water travels the globe, cools off (becoming more dense in the process), sinks, and travels back to tropical area's to repeat the process. In your fictional world, it could be possible to have a warm band of surface water that travels a good portion of your globe and provides a constant heat source for the system. You would want this relatively shallow (think gulf of mexico shallow) or the system will churn up cold water and kill itself (or convert to a cold core cyclone).

See if I can get an image to work here:

As an interesting side note, the sub-saharan dust layer is a feature where dust from the Sahara desert makes it into Caribbean waters using the Easterly Jet shown here. Storm systems in the Indian ocean actually fuel this event. It is thought at one point in time in colonial history (from sailors accounts) that this easterly jet was significantly stronger than it is today. A strong Jet like this can provide constant winds at the surface as well as at higher elevations and potentially give no wind shear for the hurricane to grow. If this jet was uninterrupted and allowed to circle the globe, it is possible to allow a storm to move around the globe and somewhat keep it's shape.

On a planet like Earth, a permanent storm like this is definitely a no go. That said, I believe you could make one large change to a world that would put it into a setup that is more likely to support this permanent storm...eliminate plate tectonics. Mountains and a cold deep ocean are ultimately the two biggest factors inhibiting this storm. Eliminate plates and this will eliminate deep ocean trenches and mountains. I still think it's highly unlikely, but that would be the most likely scenario to form a storm like this.

Have no land. Since you need to work-around that, have land that doesn’t interfere with an unbroken ocean that lets a storm circle the planet at the suitable latitude without making landfall.

Now, suppose that the semi-permanent hurricane prevents other major storms from forming. Not just other cyclones, but other major weather that causes huge fronts to form, since this permanently dissipates the energy on a continuous basis.

Maybe it does die from time to time, and then other storms can form, and these happen until one forms “in the groove” and lasts for years again.

The people will not like it during times that the permanent storm is absent because they get other weather instead, such as squall lines and blizzards.

Based on my tropical cyclone knowledge, you'd want:

If you want your storm to travel over land, I'm afraid it won't be able to keep its strength. Inland depressions can merge with tropical cyclones and give them a boost of intensity, but the land friction and lack of water supply kills of the storm.

Perhaps, if your planet was make from a bunch of small islands, the storm could cause havoc while being relatively unharmed.

this question is over 2 years old but I think I can add a few more details for other people who end up on this thread when pursuing information.

What you will need is for the majority of the Northern Hemisphere be nothing but relatively shallow ocean with a global wind stream like Twelfth mentioned. However, plate tectonics does not need to be removed, rather additional heat could come from thermal vents and underwater volcanic activity to further fuel this eternal storm. Volcanic sediments would just keep getting swept away and pushed down close to the equator by the rapid currents and wind, possibly shunted down towards the equator to form massive ash dunes and deserts around the whole planet.

Not the answer you're looking for? Browse other questions tagged science-based environment earth-like weather .

10
Could a permanent storm system circle a planet's equatorial zone?
6
Can a terrestrial planet have a long lasting hurricane like the great red spot?
2
Perpetual storm on Earth

2
How would tectonics behave on a two continent planet?
7
How would a large arctic mountain range affect the weather?
3
Hurricanes in a Large Ringworld, Clockwise or Anti-clockwise rotation?
9
Cauldron of Storms: Geography to create and isolate localized mega-storms
4
What would pressure belts look like on a world with continuous land?
4
Creating a gas-giant based empire, how can I maximize the amount of Earth-sized habitable worlds around a gas giant?
11
Determining climate and biomes in a non-planetary setting
4
How would a 384 hour day/night cycle on a desert planet affect the weather?
10
Weather processes on a flat world