Planet of the Aves: Tool use

On the planet of the Aves, birds have evolved to dominate the Earth instead of mammals. Of the thousands of species in this world, both on the ground and in the water, the only one to develop sapience are a species of flying birds whose ancestors are the New Caledonian Crow.

As I design this species, I have wondered what their tools would look like, crows have been known to build tools such as hooks, but those are fairly basic. The premise of all human tools; axes, picks even hammers, is that the weight of them can be taken advantage of by momentum, but a crow, evolving for flight would not be able to use the human versions of these tools.

What could I expect a sapient crows equivalent to human tools to look like? What accommodations would a crows ax need to take into account? What about their picks or their hammers?

The business-end of a crow tool probably wouldn't differ much from the human equivalent; tools meant to cut will have a sharp edge, tools meant to pierce will be pointed, hammering tools will have a flat, blunt face, and so on. Where they will have to differ is in the nature of the grip. Held in the beak and pointing outward puts the crow at a disadvantage: the eyes aren't far from the beak and need to see the target, so the tool couldn't obscure their vision; the shape of the beak means to maximize surface contact the handle needs to be wide and flat, perhaps with an opening or depression for the bend at the tip of the beak to pass through or sit in. Tools may be specialized for up-down or left-right motions, oriented either parallel or perpendicular to the breadth of the handle.

Variants may include handles meant to be held at an angle, with part of the handle extending backwards along the side of the crow's head. The tool head may be angled to compensate: 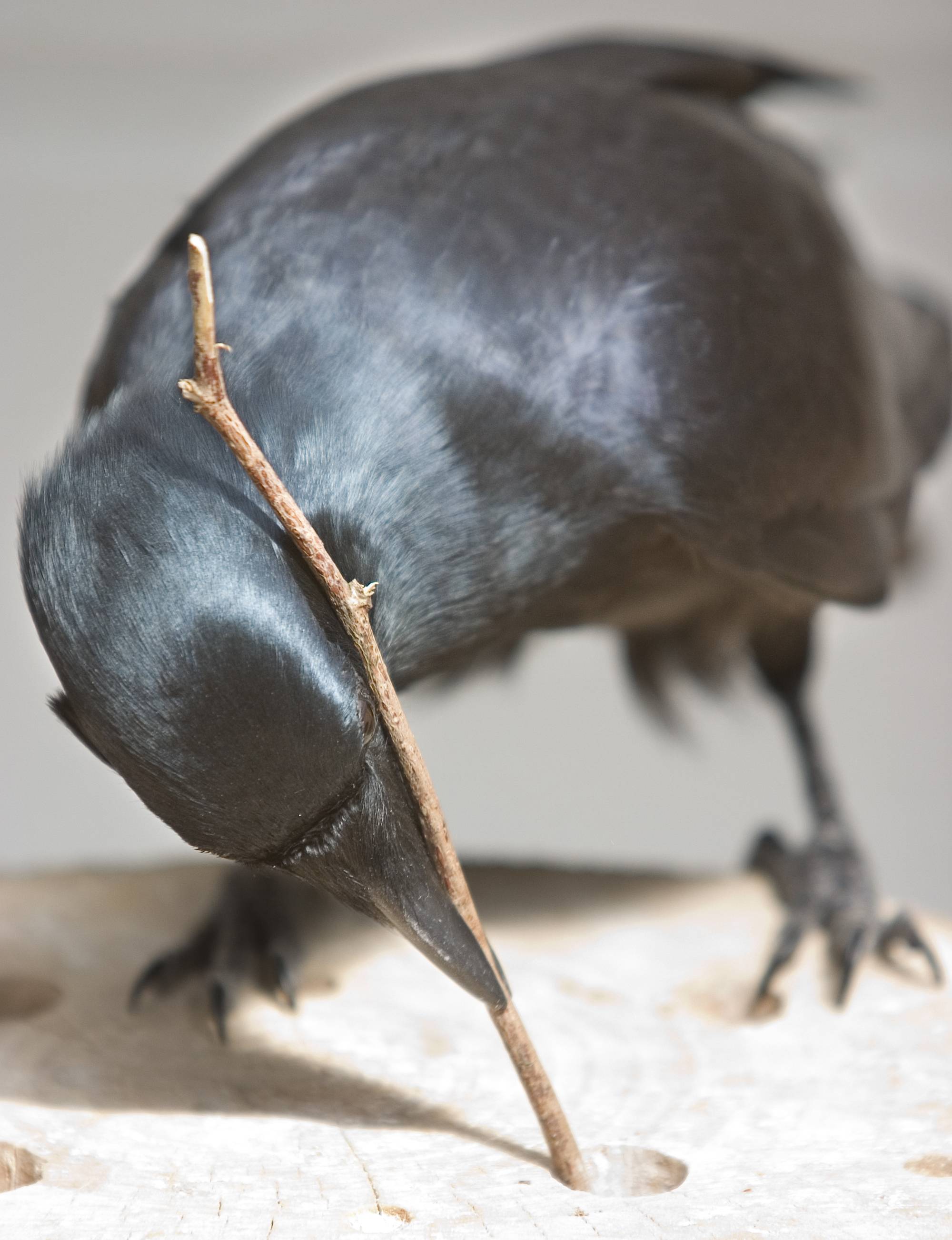 This configuration would probably be limited to side-to-side raking tools and plunging/piercing tools.

Assuming a bit of mutation here. The tongue could serve a thumb-like role when it comes to gripping tools with the beak. In this case the tool will be designed much like those described above, but will have a divot or indent for the tongue to press into or curl around for added support and control.

I don't know off-hand if crows have been observed using their feet to manipulate tools, but bracing one end of the handle against the ground with the foot and using the head and beak to guide the working end along an arc seems like an obvious adaptation. A second handle, perpendicular to the bracing handle, could allow the crow to grip at a distance for better perspective on the target area. Akin to the handles of a scythe: 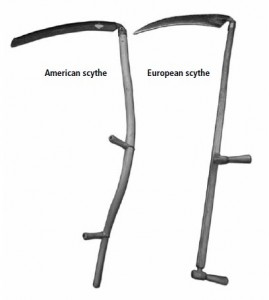 These tools would be designed to take advantage of terminal velocity and will be designed to be as aerodynamic as possible. They would be larger and therefore weightier than the beak-gripped tools, and held in the talons for a steadier and firmer grip. Most of the weight would be in the bladed edge or hammering surface, to prevent tumbling.

For increased precision I would anticipate a dive bomb approach, in which the crow gets as much altitude as needed and then plummets as vertically as possible to the target below, releasing the tool and pulling out of the dive.

This type of tool would be better suited to rough chopping and battering/hammering.

Not the answer you're looking for? Browse other questions tagged science-based internal-consistency avian tools .