Planet with large areas of shadow

I wonder if there is a stable star-moon-planet system where a specific area of the planet would be permanently covered by shadow. I'm not looking for a common tidally locked planet with a roughly 50% dark zone. This is the desired order of preference for my world:

I'm willing to allow any non-conventional (but non-magical) feature to this system: large moons, more than one sun or even a torus planet topology.

While this doesn't meet any of your stated parameters (specifically the permanent requirement) and I have zero background in this field, I figured I'd post anyway :)

Uranus has a massive axial tilt that gives its poles 42 years of darkness followed by 42 years of sunlight. Someone else may want to comment if speed of rotation can affects the time, what a moon system might do, etc.

If you are willing to have large-scale artificial structures, it gets a lot easier. For example, a planet whose equator is coincident with the plane of its orbit, and has a large solid, artificial ring in geosynchronous orbit would have its equator in permanent shadow.

As mentioned in the comments:

A moon or satellite (artificial or no) is tidally locked to your planet, and your planet to it. So the system turns in a "day" and the two bodies always show the same face to each other. The system needs to be exactly in the plane of the solar system so that a solar eclipse will happen over the same place every day.

Unfortunately the sun would be visible in the morning and evening.

I believe a rogue planet could find orbit a binary system where said planet rotates in a way where it's equator is dark and poles get plenty of light (because the orbit is equidistant from the two stars masses in a small orbit). This pic shows the concept (sizes not depicted well :P ): 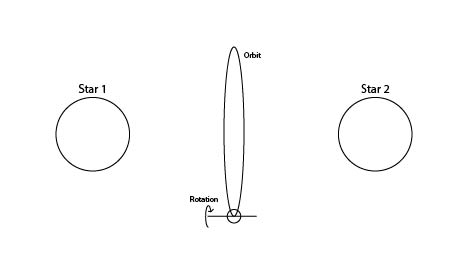 How about planetary rings? If the planet and ring system had only a small axial tilt then a horizontal band near the equator would be in perpetual shadow. 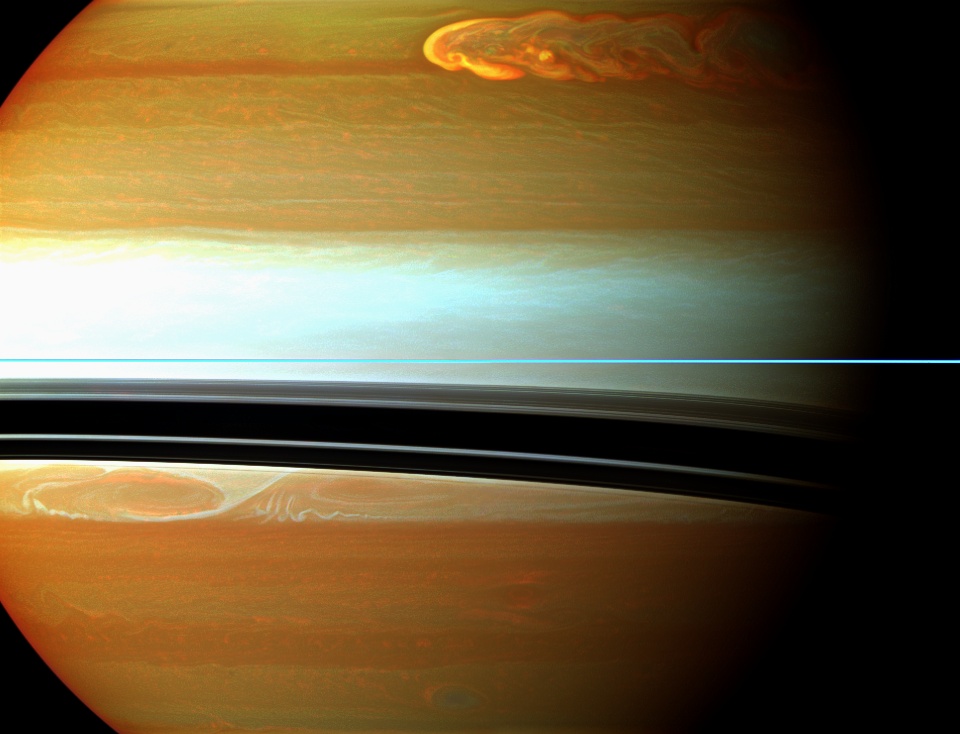 Other more complex configurations would also be possible, but wouldn't quite result in 100% permanent shadow, or at least I can't picture any specific configurations that would.

Earth's moon does have some small areas like that. Requirements are: 1. Rotation axis near zero tilt to the orbit. 2. Craters or large mountains near the north or south pole.

The tilt means the sun never rises much above the horizon at each pole, and some areas there could have a mountain in the way at any given time of day. If you want to arrange it so, you could also have some nearby areas get sunlight only for a few minutes a day with an appropriately positioned canyon. The only issue would be the atmosphere, if the planet has one, would still supply twilight illumination to the area. Some of our moon's southern craters have areas that can hold surface ice because they never get direct light, so it never warms up to melt or sublimate the ice.

Not the answer you're looking for? Browse other questions tagged reality-check planets stars solar-system or ask your own question.

12
What would a planet with no moon look like?
5
Tidally locked planet with day & night cycle
4
What would allow a livable planet to have an always-night area, an always-day area and a day&night cycling area?
5
What would it take for a continent to be covered in cyclical darkness?
2
Could a habitable tidally locked planet have a day and night cycle caused by the eccentricity of its orbit?
2
Is this habitable moon possible?
8
Tidally locked dual planet system and their magnetospheres
7
What geological consequences would result from a binary planet system?
1
Small planet tidally locked to a red dwarf which is orbiting a main sequence star