Red Plants Alongside the Green

What many people mayn't know is that there actually three basic types of algae: 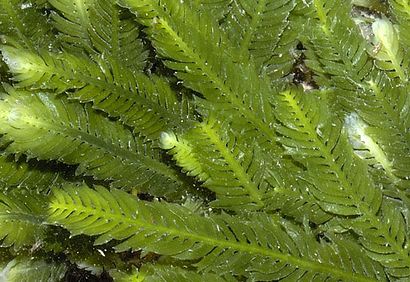 Green algae, the origin of the kingdom Plantae 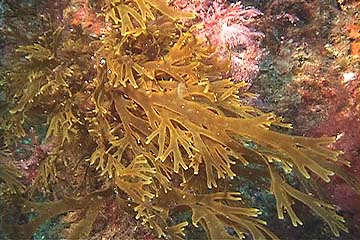 For this question, let's disregard brown algae because brown algae is a geologic newcomer--no older than 150 million years.

They'd likely all evolve to be green.

The leaves of green plants tend to be dominated by chlorophyll, while those of red or purple plants have a different pigment called anthocyanin. Plants have evolved to produce both of these pigments, and generally whichever pigment is more beneficial for survival in a given environment is the one found in plants in that environment.

If there existed plants that ancestrally used a red pigment, like anthocyanin, it's likely that they, too, would evolve the ability to produce a variety of different pigments, some of which would be more useful than others in some environments. Most plants would probably be green, regardless of their ancestry, because chlorophyll is more efficient at converting light into energy, in most environments.

If, unlike plants, our new red organisms couldn't produce photosynthesis, they'd probably die out. Chlorophyll-based plant life is dominant on earth because it's the most efficient, and non-chlorophyll based life would likely be unable to compete with it in most ecological niches.

Interestingly, there's a hypothesis that green plant life wasn't always dominant on Earth. The Purple Earth Hypothesis states that retinal-based photosynthesis evolved first, but that retinal-based organisms were unable to compete with plants in most ecological niches. They still exist, though not in great numbers, with haloarchaea being the prime examples.

The red and green algae's, all land plants and glaucophytes are archaeplastida. Plants aren't "more evolved" versions of algae. They're all cousins in a not-yet fully understood family tree. They all evolved separately from common ancestor species.

The red algae are only red because they have adopted to the unique resource niche of light and carbon sources underwater. They would have no reason to exist anywhere else.

Copper beech trees are mutants with red-purple leaves, though this Kew Gardens information says their leaves turn 'spinach green' at certain times of year. Also many rainforest plants have red or pink leaves when the leaves are young. The red chemicals are possibly to protect them from the sun or from leaf-eating creatures.

So red plants are entirely possible.

Let's stick with a yellow sun in order to explore a possibility...

Since red plants will be less efficient at collecting sunlight than green plants, what if there is another source of energy on your planet other than sunlight that they collect? Some kind of ambient radiation coming from a mineral or process under the surface perhaps? Maybe the red plants are adapted for converting hard radiation into energy?

You could even use a cluster of red plants as a guide to avoid a certain spot on the surface perhaps.

If they are efficient enough at collecting radiation, what if some types could actually grow in a cave with minimal or even no sunlight at all? Underground foliage?

Could make for some cool looking "alien planet" concepts.

Not the answer you're looking for? Browse other questions tagged science-based evolution flora or ask your own question.

37
What would be the evolutionary advantage for plants to be bioluminescent?
21
Could plants develop intelligence?
4
Explosive plants
4
Plants made out of metals
16
Could plants develop sentience?
9
Little Green EARTH Men?
16
Are plastic plants plausible?
4
Purple plants on a planet orbiting a green star?
10
Mass extinction because of too low CO2-lewels
2
Bryophitic Plants in an Underwater Forest